close
Not every actor is Channing Tatum 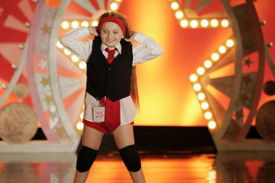 From Closer to The Wrestler to Burlesque to Magic Mike, the last decade of Hollywood has proven the power of skin. But stripping isn't always sexy. Remember The Full Monty? In fact, stripping doesn't have to follow any rules at all besides: 1) wear clothes, and 2) take them off. Sounds easy, but it isn't. The following are five of the most unorthodox (and unsexy) strip scenes in recent memory.

1. Little Miss Sunshine (2006)
At the end of this quirky road-trip, 8-year-old Abigail Breslin performs her beauty pageant talent for the first time. Her routine, choreographed by her late grandfather, is in fact a striptease. The girl is unaware of the crowd's shock as she gives a strangely focused performance, confidently ripping off her pants to the sounds of "Superfreak." While the strip itself is amusing, the movie audience becomes as uncomfortable as the one on screen. But when the judges attempt to stop the performance, her family rallies around their little girl, joining in her exuberant dance. What started as just awkward becomes a heartening celebration of this pack of oddballs and their antics.

2. Atonement (2007)
A pair of soon-to-be-lovers Keira Knightly and James McAvoy fight on the grounds of her parents' estate, breaking an expensive vase. Impulsively, Knightly strips to her slip and retrieves the shards as McCavoy watches in concern...and longing. Little do they know Knightly's young sister Saoirse Ronan is spying and mistakeningly assumes that McAvoy forced Knightly to strip. Thus begins a series of misinterpretions that undoes the lives of all three characters. By splitting this scene in two parts, first from the perspective of the couple, second from Ronan's point of view, director Joe Wright helps the audience to feel first the couple's almost violent sexual tension, then Ronan's chilling and childlike interpretation. It's like stepping out of a sauna and into a block of ice.

3. The Reader (2008)
1958, West Germany. Kate Winslet takes teenager David Kross for a lover by seducing him in her bathtub. While there have been other bathtub seductions (those in Birth or Big Fish, for example) this scene is remarkable for its suspense. Kross' lust for the older woman has already been well-established, yet as she leaves the room and he nervously removes his clothes, the viewer is unsure whether Winslet is about to attack him or ravish him. (And they're not sure which they'd prefer, either.) Director Stephen Daldry sustains this apprehension until the very last moment, when we see that Winslet has reentered the room naked. But her tits aren't titillating-instead, they establish the unstable balance of distrust and desire in their volatile union.

4. The Girl with the Dragon Tattoo (2011)
In the American adaptation of the hit Swedish novel, Rooney Mara impulsively decides to sleep with her journalist-turned-detective partner Daniel Craig in the aftermath of his narrow escape from death. While this set-up seems like the typical post-trauma tryst, Mara's deadpan acting and David Fincher's excessively streamlined direction leave the audience confused as to why she feels the sudden urge to get naked. After stumbling out of his blood-stained clothes, Craig sits on the bed in his underwear (so far so good), completely oblivious to Mara. Without warning, Mara turns out the other lights and literally presents herself to Craig, dropping her drawers as she stands expectantly before him. Craig looks stunned, but after some feeble protests, acquiesces. With so few clues with which to interpret this antiseptic seduction, audiences were divided on whether to admire her chutzpah or reject her apparent lack of feeling.

5. The Notebook (2004)
A controversial choice, but we'll make the case. In spite of its gift for plucking at our heart-strings, The Notebook's physical love scenes are downright weird. Having retreated to an abandoned plantation house, Rachel McAdams and Ryan Gosling decide to get busy. Inexperienced and shy, they remove their clothes one item at a time, taking in the effect of each new patch of skin before proceeding. A literally tit-for-tat scene like this usually goes quickly so that the audience doesn't get bored-after all, this is a movie, not an anatomy course. But director Nick Cassavetes is blind to this distinction, forcing us to watch their disrobement for an entire minute and a half. And then they still don't get to do the deed. Even when their relationship is finally consummated, their path to the bedroom is just as tedious, with precious moments wasted watching Gosling shuffle slowly towards the bed. A movie so clearly dedicated to romance should do a better job of capturing the momentum of physical passion.