Foreign Actors in Hollywood: Who's a Star and Whose Career Has Burned Out? 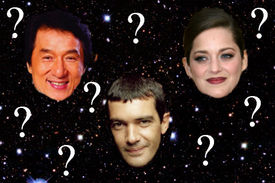 Last year, all 20 of Hollywood's highest-grossing films made more money abroad than at home. The new clout of the international box office has propelled studios to hire more foreign stars. Freida Pinto, for example, who stars in this week's Trishna, was plucked as an unknown from India to star in Slumdog Millionaire, and has been working nonstop ever since. But while plenty of Hollywood icons, including Marlene Dietrich, Ingrid Bergman, and Arnold Schwarzenegger, are overseas imports, most foreign stars find it enormously difficult to transition from novelty act to star attraction.

Here's the formula for the rise and fall of a foreign star: Pluck a non-English speaking actor/actress* from a good foreign film, give them a role as an Accented Villain (if male) or Willowy Eye Candy (if female), make them act in a language (English) they don't speak, and watch the life drain out of their eyes. Repeat until backlash ensues, then discard. The foreign stars return to their country, usually to wide acclaim in movies where they're not pigeonholed as cartoons or mannequins, while Hollywood pats itself on the back for casting non-white actors. (Yes, Spaniards Penelope Cruz and Antonio Banderas count as "non-white" in Hollywood.) How are eight contemporary foreign stars faring in Hollywood? Let's assess their success by looking at their breakthrough films, their Hollywood highs, and their lamentable lows:

Penelope Cruz — Cruz was an award-magnet and a national idol in her native Spain, winning over audiences and charming los pantalones off women and men alike. When she arrived in Hollywood, though, she had to go through three Razzie noms before winning her Oscar.
Breakthrough: All About My Mother. Cruz played an AIDS-afflicted nun knocked up by a transgendered prostitute. (Sigh, remember when Pedro Almodovar used to make gonzo movies like this?)
High Point: Vicky Christina Barcelona. Sure, Cruz plays a stereotype—Maria Elena is a standard Latin Lover with some of Zelda Fitzgerald's DNA—but her bilingual performance in VCB is sexily, scarily, undeniably and intelligently smoldering.
Low Point: Vanilla Sky. Reprising her role in the Spanish film Open Your Eyes, Cruz squinted and grinned her way to Tom Cruise's heart in a second-rate impression of Drew Barrymore. The result? Her third Razzie that year.
Star or Burnout? Star, by the skin of her very lovely teeth. Her post-Vanilla collaborations with Pedro Almodovar and Woody Allen earned her the critical acclaim she so badly needed to sustain a career stateside, but most Americans see her more often on magazine covers than on the big screen.

Ken Watanabe — In Japan, Watanabe is a well-regarded theater, film, and TV actor best known for playing samurais and dementia patients. In America, he's usually seen as a noble-hearted stoic, though sometimes he gets to play a cold businessman. Basically, Hollywood doesn't let him move his face very much.
Breakthrough: The Last Samurai. Cast out of nowhere, Watanabe provided the Tom Cruise-as-the-white-savior-of-Japan flick the gravitas it desperately needed.
High Point: Letters from Iwo Jima. Clint Eastwood's companion piece to Flags of Our Fathers had Watanabe play a kind-hearted general who knew he and his troops were doomed.
Low Point: Memoirs of a Geisha. As the only Japanese actor among the main cast, Watanabe was saddled with the role of a wealthy man who you know is noble because he helps a little girl get work in the best brothel in town.
Star or Burnout? Burnout. Watanabe has been getting steady work on this side of the Pacific, but it seems highly unlikely he'll get to advance beyond bit parts. At least they're bit parts in Christopher Nolan movies.

Gael Garcia Bernal — Garcia Bernal interrupted a promising career in teen heartthrob-hood with a stint at a London theater school, then returned to Mexico to become that country's indie darling. With America's shifting demographics on his side, Garcia Bernal should have been able to capitalize on his good looks and arthouse pedigree in the U.S., but then Kate Hudson happened.
Breakthrough: Y Tu Mama Tambien. Garcia Bernal played one half of a pair of knucklehead buddies (the other half played by Diego Luna) who take a beautiful older woman to a paradisical beach in the hopes that she'll sleep with one of them. To the hyperventilating joy of many, many women around the world, G.G.B. and Luna decide to have a go at each other. (SPOILER ALERT, but come on, you could see it coming a mile away)
High Point: The Motorcycle Diaries. Garcia Bernal won more fans when he played Che Guevara as a weak, lovesick college student in a sentimental biopic that would make the violent revolutionary roll over in his grave.
Low Point: A Little Bit of Heaven. After his Will Ferrell comedy Casa de Mi Padre went nowhere, Garcia Bernal picked up a stethescope to play doctor to Kate Hudson's girl-with-cancer in this "droolingly stupid weepie," thus nailing the coffin on his Hollywood career.
Star or Burnout? Massive burnout. After Tu Mama, Garcia Bernal worked with some marquee-name directors—Pedro Almodovar, Michel Gondry, Alejandro Gonzalez Inarritu—but he kept cashing those Latin Lover paychecks in low-budget, slapped-together films. Don't worry: he's doing fine back in Mexico.

Marion Cotillard — Cotillard was a relative unknown in France when she snagged the starring role in the Edith Piaf biopic that made her a star. Now she's being compared to the likes of Catherine Deneuve, when she hasn't really done anything remotely interesting since landing in the U.S.
Breakthrough: La Vie en Rose. What's there to say, except that audiences really like it when actors go ugly and impersonate other famous people?
High Point: Uhhh...
Low Point: Midnight in Paris. Cotillard was perfectly charming in Woody Allen's masturbatory ode to how all the Jazz Age greats would have lurrrrved him, but the actress had little more to do in her thankless role as a Parisian Manic Pixie Dream Girl than bat her eyelashes and be an idiot.
Star or Burnout? Burnout... almost. Cotillard's face is tres magnifique, but she doesn't ever get to play a role that's not window dressing, even if she seems more intelligent than anyone else in the cast. Nor is she a big enough name to carry a film in Hollywood. Sorry, Marion.

Jackie Chan — A 50-year veteran of the movie industry, Jackie Chan is the biggest star in Asia, if not the world. Whether the Hong Kong martial artist-clown ever enjoyed significant success in Hollywood is debatable, but the ever-busy Chan doesn't seem to mind being relegated to Mr. Miyagi status by a studio system he doesn't control or understand.
Breakthrough: Supercop? Enter the Dragon? The Legend of Drunken Master? Drunken Master? Hollywood found Chan late, and the asskicking comedian only agreed to make a film stateside if he wasn't cast as a villain. It took years for an American producer to agree.
High Point: Shanghai Noon. Sure, this lo mein western isn't anywhere near Chan's physical or aesthetic peak, but it's the film that best captures Chan's goofy, comically misunderstood persona. Too bad that persona was embodied by his co-star Owen Wilson.
Low Point: Rush Hour 3. For an actor who's done more or less the same thing in 150 films, this is the first time that Chan seems indifferent to whether audiences see his exhaustion. No wonder he's disvowed the entire trilogy.
Star or Burnout? Solid planet. Chan's entirely given up on a Hollywood career—and on action films too, as of this year. Though he doesn't shine so brightly, he's much too big an entity to ignore.

Antonio Banderas — In the '80s, Banderas became a star by breaking every sexual taboo in Spanish cinema, from kissing another man to making a rom com about a kidnapper and his Stockholm Syndromed victim. He got his start in Hollywood learning his dialogue phonetically, but his accent proved to be more of an advantage than a liability.
Breakthrough: Women on the Verge of a Nervous Breakdown. Even behind a baggy suit, granny glasses and six inches of hair-height, it was easy to see the Spanish actor was a total hottie.
High Point: Spy Kids. Banderas has made a lot of important movies in the past—Philadelphia, Desperado, Frida—but he's most enjoyable in the oeuvre of films collectively known as Antonio Banderas Makes Fun of Himself and It Somehow Never Gets Old. The Robert Rodriguez kiddie flick is the best of that bunch.
Low Point: Ballistic: Ecks vs. Sever. Hey, it's not every actor who has starred in film with a 0% Rotten Tomatoes score.
Star or Burnout? Star. Banderas probably has more clunkers in his filmography than hits. But the actor's Spanish indiscriminate movie choices and mainstream audiences' indifference to his Spexican identity have converged to make the massively talented—and mucho sexy—Banderas an enduring star.

Christoph Waltz — The German-Austrian Waltz was a prolific TV actor in Vienna when Quentin Tarantino plucked him from obscurity. Now he's the go-to guy if you need a one-dimensional but convincingly cruel mastermind in your prestige pic.
Breakthrough: Inglourious Basterds. Despite playing a stereotypical German (i.e., a Nazi), Waltz won an Oscar for his role as Hans Landa, the "Jew-Hunter"-the only actor to ever win a trophy from a Tarantino film.
High Point: Inglourious Basterds. It just won't ever get any better for him.
Low Point: Water for Elephants. He plays Landa Lite in this Depression-set melodrama about a love triangle between him, Reese Witherspoon, and Robert Pattinson. Waltz plays an an evil genius with iron fists... who's somehow unable to beat Sparkle Pattz. Yeah, I don't think so.
Star or Burnout? Burnout... almost. So far, Waltz has been five for five in playing smooth but sadistic villains. He's always fun enough to watch, but it's kinda depressing that the biggest German actor in Hollywood since Marlene Dietrich is forever going to be known as a Nazi.

Ziyi Zhang — China's most famous face after Jackie Chan, Zhang was introduced to international arthouse audiences by Zhang Yimou, China's most prominent director. She's frequently flirted with a Hollywood career and is probably recognizable to most mainstream audiences, even if they don't know her name.
Breakthrough: Crouching Tiger, Hidden Dragon. Zhang won plenty of attention and accolades—as did pretty much everyone else involved in this film—for playing a martial arts prodigy in a Romeo and Juliet-type situation.
High Point: Memoirs of a Geisha. Sure, the film glamorizes female subjugation, and romanticizes a prostitute falling in love with her client... wait, never mind.
Low Point: Rush Hour 2. She's a gangster with martial arts chops, so why can't she get Chris Tucker to shut up for two seconds?
Star or Burnout? Burnout—and totally okay with it. At the outset of her career, Zhang had the desire to become big in Hollywood, but describes that roles that Hollywood offered her after Crouching Tiger as ''prostitutes, victims, poor girls sold to America"—you know, the standard roles Hollywood offers to young Asian actresses. Faced with poor prospects, she decided to stay in the burgeoning Chinese movie industry, where she is now virtually royalty. Given the way Hollywood routinely treats foreign actors, it's a wonder anyone comes to this town.

*Obviously, this formula doesn't apply to Canadian, Australian, Irish, and UKers, whose accents read as charming (good-different) rather than foreign (scary-different), and who can speak in an American accent when necessary.