close
Will it be Star Trek, Casino Royale, Batman Begins or The Amazing Spider-Man? 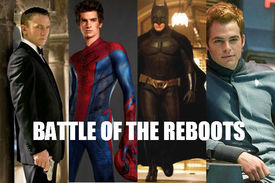 This week, we'll look at the franchises that have tried to follow in Nolan's successful footsteps. The definition of a "reboot" can vary depending on the context and whom you ask. Is a reboot always a prequel? Not necessarily. The re-telling of Peter Parker's origins in The Amazing Spider-Man has made sure of that latest asterisk-led description.

But first, let's go back to the genesis of Hollywood's sudden interest in reviving stale franchises. Batman Begins certainly didn't explode out of the gate in June 2005. Its $48.8 million three-day opening (after a Wednesday release) was considered disappointing given that each Batman film before it had broken three opening weekend records between 1989 and 1995. A sloppy marketing campaign was largely to blame (Nickelback music would never grace another promotional ad for a Chris Nolan flick), as was the stigma left from 1998's disastrous Batman & Robin. No one cared about Batman anymore. At least, not until they finally came around to seeing Begins.

With a leggy run throughout that summer, the film went on to gross $205 million domestically and almost $373 million worldwide. Though it struggled to profit on its $200 million combined budget, the film found even stronger life through home video sales and cable re-runs. Warner Bros. and Nolan didn't just deliver a successful reboot—they delivered a huge investment in their future.

One year later, the influence of its successful reboot was felt. James Bond had been absent from movie theaters for four years after Pierce Brosnan's popular run ended on a bum note with 2002's Die Another Day. The film was profitable, but fans were concerned with the series' increasing cheesiness and over-reliance on sexual innuendos. Meanwhile, Jason Bourne was re-writing the spy game as The Bourne Identity and The Bourne Ultimatum became huge hits during Bond's hiatus.

Enter Daniel Craig and director Martin Campbell (who had already revived Bond once before with GoldenEye). Going back to the beginning to tell the origins of Bond (something that, like Batman Begins, had never been done before on screen) proved fruitful. Casino Royale's grittier tone and return to character-driven escapades gave fans what they wanted and convinced everyone else that there was still more to Bond than gadgets and girls. Royale banked $594 million worldwide on its $210 million combined budget. Bond was back, and it was all thanks to the "reboot."

With money filling up the vaults of Warner Bros. and Sony after their widely-acclaimed franchise revivals, Universal tried something similar in 2008 with The Incredible Hulk. Granted, the film is still technically considered a sequel to Ang Lee's failed 2003 Hulk, but this new attempt to adapt The Hulk thoroughly distanced itself from the previous film with a significant shift in tone and direction, plus an entirely different cast. (Perhaps "re-imagining" would be a more appropriate title.) Unfortunately, the pic yet again failed to live up to fan expectations. While The Incredible Hulk is generally regarded as a vast improvement upon Ang Lee's 2003 film, it still struggled at the box office and made only $263 million around the world on a $200 million budget.

The next studio to hit reboot: Paramount and the increasingly-in-demand J.J. Abrams. Their Star Trek reboot changed the game. Before 2009, the franchise was coming off the financial disasters of 2002's Star Trek: Nemesis and the failed TV series Enterprise that went off the air in 2005. The brand name risked being completely forgotten beyond the franchise's glory years. Abrams and co. changed that, however, by going back to the beginning and chronicling the origins of Kirk, Spock, McCoy and the gang, a surprisingly new idea to the old series. By marketing the film as a pure sci-fi action/adventure event, mainstream audiences were convinced to give it a chance—and they loved it. So did critics. The summer blockbuster pulled over $257 million domestically in 2009, towards a total of $385 million worldwide. The investment paid off and the stage was successfully set for a new series. (Stay tuned for 2013's sequel.)

Two years later, Fox went back to the drawing board with its X-Men series. X-Men: First Class went retro, pinpointing the origins of Professor X and Magneto during the 1960s Cold War climate. While the film didn't quite measure up to the blockbuster performances of its predecessors (understandably so, without any major stars in the new film), it still delivered the hit Fox needed: $353 million, fan and critical adoration, and a green-lit sequel due in 2014.

On the subject of Fox, one might even argue that 2012's Prometheus is itself a reboot: new cast, new characters, and—according to some—an entirely re-engineered continuity of the Alien franchise. Whether this film falls under the category of a bona fide reboot is in the eye of the beholder, but nonetheless, it's certainly a re-imagining of a universe that had already been well-established. By the end of its run, it will have amassed almost $300 million worldwide on a $180 million budget.

And that brings us to Spidey. Sam Raimi's first two Spider-Man films in 2002 and 2004 are some of the biggest and most beloved blockbusters of the past decade. The third 2007 film, however, put some tarnish on those achievements as fans cried out against the extraneous villains (including a shoe-horned-in Venom) and disappointing script. Despite breaking the opening weekend record that year, Spider-Man 3 fell off the end of the Earth and "emo" Peter Parker is still the butt of jokes online (and probably always will be).

Needless to say, as the costs of Raimi's films and cast continued to increase, Sony felt that the risk of doing a fourth movie with that crew was too high. But if they didn't put Spider-Man on the screen fast, they risked having his film rights revert back to Marvel. So what does a studio do when a lucrative character is on the verge of losing his blockbuster stature?

You guessed it: reboot.

This time, Sony would also give its own spin (pardon the pun) to the word. Unlike these other series, Spidey's origins had already been told on-screen—and only ten years before. It was a bold move to re-tell them again, but The Amazing Spider-Man has trounced the pessimistic box office expectations that preceded it. The film debuted to over $137 million in its first six days of domestic release (tracking for a gross around $250 million or more). Worldwide, the film could easily hit $700 million if it continues to hold up in the coming weeks. Competition from The Dark Knight Rises will have a lot to say in that matter, but it shouldn't matter as the film's $305 million negative cost will be recouped.

Fan and critical responses to this reboot aren't nearly as strong and unanimous as they were for several other films on our list, but they're still generally positive. And honestly, it's probably impossible for a re-telling of a modern mega-blockbuster to live up to any high expectations. The real story for this series' new incarnation will be told in how its sequel performs. You can get away with re-treading ground once. Twice? Not likely. But thankfully for Sony, they have a huge universe to pull inspiration from. Though 3D and price inflation in general are going a long way toward buoying the box office success of The Amazing Spider-Man, the studio still deserves kudos for convincing audiences to take a chance on something that was already done incredibly well just ten years ago.

The 5 Most Profitable Reboots: