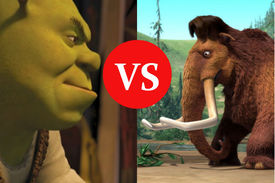 Here's something hard to believe: despite Hollywood's love for cash cows with family appeal, until 2010 no animated series ever stayed on the big screen for more than three installments. The one who broke that new ground was the big green ogre himself in Shrek Forever After—the self-proclaimed "final chapter" of Dreamworks' seminal nine-year series.

This summer, however, Fox joins the ogre's ranks with the release of their fourth installment in the Ice Age franchise. Despite being a huge moneymaker, the series has flown under the radar. Fox isn't really known for its animation department (a stark contrast to Dreamworks, one of the two top dogs in the genre), and Ice Age itself has never found the same critical acclaim showered over the first two Shrek films and the Toy Story series. It doesn't even have that older fan base who gravitates toward Pixar.

Nevertheless, after a very successful first film in 2002 and even more successful sequel four years later, Ice Age stands as one of Hollywood's most lucrative franchises—and not just in the animation genre, but in all genres. The real question is: does it deserve as much credit as the Shrek series for its financial success? Let's take a look:

You know the story: 2001's Shrek was an animation game-changer. The film was made for $130 million—a hefty budget for a cartoon at the time. After a respectable $42.4 million opening, the film became one of the biggest hits of the year as it played for audiences of all ages (literally) throughout the summer. Closing with $267.7 million domestically and $484.4 million in total around the world, Shrek was at one time the second-highest grossing animation in domestic history, behind only The Lion King.

Ice Age's success was more modest. Although it out-opened Shrek with $46.3 million and excellent word of mouth, it still fell short of that "must see" thrust of Shrek that lured in non-family audiences. The flick's $383.3 million global tally was almost exactly $100 million less than the ogre's first outing, but Ice Age's slightly lower budget at least kept it in competition. The film was a huge hit (making 3.48 times its budget), but still not quite as profitable as Shrek (3.73x).

Capitalizing on the first film's success, Shrek 2 tore down every preconception the industry ever had about animated sequels. Sure, Toy Story 2 proved that it was possible to out-do a beloved predecessor. But it was Shrek 2 that became the first animated flick to open to over $100 million during its three-day weekend. The sequel successfully pulled in the ages 6-60 audience it won over with the first film, and its $441.2 million domestic take was enough to become the highest grossing (discounting inflation) animation in North American history, as well as the biggest film of 2004. Worldwide, the take was nearly $920 million—4.38 times the $210 million price tag.

Shockingly, however, that wasn't enough of a profit margin to give it an easy win. Ice Age: The Meltdown didn't hit theaters until almost two years after Shrek 2, and it came at a time when the industry was beginning to see the decline in "event" status of every CG animation. As the genre saturated the market more and more each year, demand kept decreasing. That didn't stop Meltdown from out-performing its predecessor, though. The Fox sequel raked in $655.4 million worldwide—or less than three-quarters of the Shrek sequel. But it wasn't DreamWorks taking home the better profit margin this time: The Meltdown was significantly more profitable, making 4.85 times its combined budget ($135m).

Round 2 Winner: Ice Age: The Meltdown.

With incredibly strong goodwill from Shrek's first two films, it was no surprise that the third film opened even bigger in 2007 with $121.6 million.  Word of mouth finally failed it, though. While the film still performed respectably, it didn't triple its opening at the domestic box office (something pretty rare for an animated movie, even sequels). Audiences felt its fresh concept had turned into a re-hash, though the early overseas expansion helped curb some of the loss. Shrek the Third's final global gross fell just a hair short of $800 million, despite dropping over 25 percent domestically from Shrek 2. The final take was good enough to make 3.33 times its budget, but it was easily the least profitable Shrek film to-date.

Conversely, Ice Age: Dawn of the Dinosaurs would hit it big in the summer of 2009—very big.  With a $196.6 million domestic gross, the actual ticket sales were down from the first first 2006 sequel, but that wouldn't matter. Overseas markets had begun to explode during this time, and those audiences embraced Dawn of the Dinosaurs to the tune of $687 million—more than $220 million more than the second film's international take. In fairness, this third entry had 3D where Shrek the Third did not, so premium ticket prices helped. Nevertheless, Dawn of the Dinosaurs and its $883.7 million worldwide haul made it the most profitable Ice Age film yet. In fact, by making an incredible 5.89 times its budget, it was more profitable than any Shrek film ever.

Round 3 Winner: Ice Age: Dawn of the Dinosaurs by a landslide.

The "final chapter" of Shrek made its way to theaters in May 2010 and despite being the first film in the series to add 3D to its box office arsenal, DreamWorks fell from cloud nine.  The film opened to a disappointing $70.8 million, with fewer tickets sold than the first film's opening in 2001, but it at least managed to find slightly better word of mouth than Shrek the Third. Making $238.4 million domestically and $752.3 million worldwide, Shrek Forever After fulfilled the expectations of any great cash cow by once again turning a theatrical profit. But the damage was done: making 3.13 times its $240 million cost, the four-quel was the least profitable film of the series and left many fans wishing the studio had quit after Shrek 2.

That brings us to now. Domestically, Ice Age: Continental Drift has lived up to the law of diminishing returns with a slightly lower-than-expected opening weekend. The film should find considerably play-ability in the weeks ahead though due its nature as the last animated movie of the summer—families have no choice but to take the kiddies once Madagascar 3 and Brave are gone from multiplexes. And again, the big story is overseas as the Ice Age franchise has its biggest appeal outside our borders. Continental Drift is on track to bank at least $650 million internationally, and when that's combined with the $140-150 million that the film could reach stateside, Fox will be knocking on the door of an $800 million global gross.

Even more impressive: the studio made the film for a relatively modest $160 million. Continental Drift will undoubtedly wind up on par with The Meltdown in terms of profitability, and is likely to be more profitable than any single Shrek flick.

There you have it. Just because the green ogre himself is more beloved, it doesn't mean he's more bankable. Fox is sitting pretty now having ensured that its three consecutive Ice Age movies have generated a stronger profit margin than the comparable three Shrek movies. What's more, the race wasn't even close: the DreamWorks franchise found smaller and smaller returns from the second film onward, while Ice Age has yielded better results with age.

Fox can learn a lesson or two from DreamWorks, however. It's no secret that the Ice Age films are far from critical darlings, and the domestic audience continues to shrink with each installment. 3D premiums can only go so far in helping a film's box office offset its bigger costs (Shrek Forever After found that out the hard way), but Fox should be given kudos for keeping the Ice Age budgets significantly lower than most animation blockbusters. DreamWorks' big green ogre was able to still go out with a profitable success—even if it was far from a bang—so maybe the wisest course of action for Fox is to quit while they're still ahead. With a potential $800 million gross within reach for its latest entry though, the odds of that happening are historically slim.

The rundown (highest to lowest profitability):

Please note: "Combined budget" refers to the sum of the production budget and estimated cost of prints and advertising. All references to budgets include both of these figures unless otherwise noted. In addition, all "gross" figures—unless otherwise stated—refer to worldwide theatrical box office revenue.