Oliver Stone on California Weed, Mexican Politics, and How He Inspired a Generation of Crime Lords 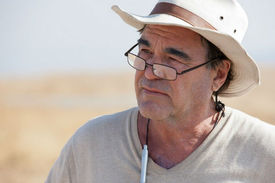 No one completely agrees with Oliver Stone. After all, he's at once pro-Scientology, pro-Ron Paul, and pro-Venezuelan dictator Hugo Chavez. But that's how Oliver Stone likes it—if you already knew what he was going to say, then why bother listening? His new film, Savages, takes a merciless view of the War on Drugs being waged on both sides of the border when two dude-bro weed dealers (Taylor Kitsch and Aaron Johnson) and their mutual girlfriend Blake Lively tangle with a Mexican cartel headed by Salma Hayek. What happens next is bloody, thrilling, and like the man himself, completely unexpected. And at the film's press conference, Oliver Stone seized the chance to share some more of his bold opinions.

CALIFORNIAN WEED
We do have an independent growers market here, which is like a boutique business, and they're very good people. They grow great stuff—best I've ever had in 40 years. Mexican weed's s--t, as we said in the movie, but they would be interested in growing better weed because there's money in it.

MEXICAN POLITICS
Listen, I'm not going to make some kind of accusation that's going to be in the headlines of Mexico City tomorrow, but I will say that what was clear to me when I was in Mexico is the connection between the money and the political parties. There's too much money in Mexico-a huge amount-that's washing around and they need to put the money in a legitimate economy. It was told to me that I can't make the judgment on the parties, but I do think that they guy that they elected in 2006, Calderon, is a disaster. He was equivalent to George Bush: he did steal the election. I have no doubt that [the liberal candidate] Andrés Manuel López Obrador won from what I've read. It's a shame because he brought what George Bush brought to this country. He brought a nightmare to Mexico by declaring war on these guys. Four cartels became seven cartels and there's more violence. It's like a civil war in your own country. It's a shame. I hope the new party guy is much more pragmatic and gets down to decriminalizing drugs with the United States.

THREESOMES
I think the whole film is an argument for love—or not love—between three people. It's very difficult to work out a three-way relationship. In Jules et Jim by Francois Truffaut, it ends with them driving off the bridge. Butch Cassidy and the Sundance Kid, if you look at it again, they bring it in, but they dangle it, and the two guys die alone.

HOW HE INSPIRED A GENERATION OF CRIME LORDS
It's funny. When I did Scarface you would've thought that it was a cartoon, but real life drug dealers modeled themselves after him. Then the Scarface character became a bit of a cliché, but it's because so many of them acted like him. What I saw in Miami with my own eyes is larger than life. And what I see in Mexico is larger than life. The world is living in a larger-than-life fashion in general. We are seeing entertainment become politics and we're seeing people acting out in ways that are extremely violent and destabilizing—including bankers. We're in an era of no rules.

HIS PROBLEM WITH THE WAR ON DRUGS
There is no closure on the drug war. Unfortunately the truth is that people do go scot-free and it's unfair, and a lot of the top drug people who have been arrested also are free. And there's deals made all the time and there's a lot of corruption and it works both ways. By creating that false environment of a war on drugs, and cruel and unusual punishment by throwing people in jail for victimless crimes—50 percent of our US population is in jail without having hurt anybody—this is a tremendous inequality in our system and it's been written about. This book The New Jim Crow has pointed that out that it's a form of slavery to put young people in jail. You ruin their lives and we're doing it constantly, every state.

WHY SALMA HAYEK IS A GREAT CARTEL BOSS
She's tough. She came from Mexico and she just propelled herself to Hollywood. I guess she didn't speak much English when she got here. I met her years ago when I did U-Turn and the first time I met her she said, "You son of a bitch, you didn't even see me for the part—you gave it to Jennifer Lopez!" I was stunned. I didn't know her. But 15 years later, I went right to her. I didn't even see another actress—maybe one—but I wanted Salma. Now Jennifer Lopez is going to come in after me.

HIS LOVE OF FILM
Film is still, in my opinion, without a doubt 15, 20 percent better than digital in its range and the depths of its blacks. There's something in the silver, the retention, there's something in the film stock that you cannot get on digital, and I swear to God I've been through this. People say digital is so much better and James Cameron has the led the way—James and Michael Mann—and George Lucas was the first. I was at that Lucas conference early in this decade up at his ranch when he was pushing the new Star Wars. The LA Times wrote it up and I was the bad guy because they led with my protest against digital saying, "What's going happen to film?" We've got to keep making film and we can't give it up. I think it may be like the baseball card business or comic book business—it'll be antique, but I don't think it's going to go away. It's like books, you know? You don't always have to have an e-book—you can have a real book. I think it will be like antique cars, it'll grow in value. I'm going to hold on to my Blu-Ray collection because I really think it's hardware and it's important and I don't want to live in a cloud all my life.