close
Shall we dance? Hell yes. 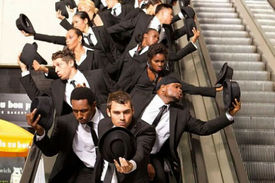 "I grew up on Steven Spielberg and all these directors who knew how to treat the audience to a great, great experience," says Scott Speer, the 30-year-old music video auteur charged to take over the Step Up saga from director Jon M. Chu, the wunderkind who put his mark on the series and has continued on as Executive Producer even as he left to helm G.I. Joe 2. The dance franchise's last flick, Step Up 3D, boasted some of the wildest visuals the format has ever seen—think 12 break dancers in six inches of water—and this fourth film, Step Up Revolution, is doubling down on the idea that when audience pay for 3D glasses, they want to be wowed. And yes, that means having a guy with springs on his shoes backflip towards the camera, and even sticking the lens underneath a bopping lowrider. But what's equally striking is that Revolution has added politics to the mix as here, the gang of dancers is using their skills to make an anti-corporate stance. Explains Speer, "We really took the format into a new place in terms of flashmobs and performance art as opposed to dance battles. I love battles—everyone loves battles—but after featuring them in Step Up 2 the Streets and heavily in Step Up 3D, I think there was a feeling from everyone that it was time for something a little different." How different? We ask.

A character in the film says that dance is now "protest." That sounds like a big decision to add politics to a dance movie.

What's interesting about that is when the script was being written and all of this was being talked about and conceived, it was six months to a year before the Occupy movement and the other protests that have sprung up all over the world through social media. It was great to see that something we wanted to take a shot at ended up working its way into the zeitgeist and the public mindset. By the time the trailer came out, I was reading articles that would say, "They're just taking advantage of the Occupy movement," but no—it all just came together for us. I'm really proud that we have that kind of bent in the movie. We didn't seek to do anything super heavy-handed—we just wanted to communicate that dance could change things. Dance is about joy, but ultimately every dancer has to answer the question: "Why do you dance and what do you dance for?"

True. Though I have to say, during Occupy LA I only saw people doing yoga. I'd rather have seen some awesome dancing.

I hear you on that!

What are the auditions like when you're putting together a Step Up film?

What's so fun is that it's not typical. You don't just call the agencies—we dubbed our Step Up open call "The Greatest Show on Earth" because you would literally see everything. Talent that you didn't even know existed would just come out of the woodwork. Sometimes it'd be a fit for our movie and sometimes it wouldn't, but it would always be incredibly positive and warm to be at those auditions. Every dancer was able to step up and say, "Here's who I am and here's what I love." It was fun to see that over a hundred times in one day. We also used Facebook and Twitter. Social media is changing the way we look for talent—we went after people from all over because they had posted a video on YouTube from a remote place, but when we saw their video, we had to have them.

When you saw someone audition by doing something brand new, did it make you want to write them and their move into the movie?

Absolutely. That's a lot of why people come to a Step Up movie: to see what we found. Dance is alive—how awesome is that? Between Step Up 3 and Step Up 4, a lot of new styles came out. People are innovating what they're doing, so in every installment, you're never going to get the same thing, which is really amazing.

It's impressive there are still new things people can do with their bodies. Did moving the Step Up setting south from New York to Miami affect the dancing?

Being in Miami gave the movie a character that it wouldn't have had otherwise. There's sort of a Latin American flavor to some of the numbers, there's salsa in the movie, but what I really found when we went to Miami was that it was an international crossroads of all kinds of different styles. You're not going to go to this movie and see "Miami dancing," even though I'd say half of our mob dancers were Miami locals. There's just so many different kinds of bands and kinds of people.

That international angle is key because the Step Up films have been getting more and more popular abroad. Was giving Step Up Revolution a global reach on your mind?

Oh yeah. Sexy Dance is what it's known as in Paris. Directors don't usually take a lot of pictures with fans—that's for the stars—but the only people who came running up to me with their cameras were Europeans. It's such a big deal over there, it was just hilarious and flattering. But I think that part of the international appeal of the movies is to see what kids are doing in the States.

Even though we're in Miami and this is an almost entirely new cast, you've still made a place for Step Up alumni Adam G. Sevani—he's my favorite.

I love Adam. He's the heart of Step Up. His fan base is fiercely loyal and we just couldn't not have Adam. It was really important, not just to thread Step Up Revolution to the other films, but because Jon and Adam created this lasting character of the ultimate underdog, this kid who you'd never believe can dance but absolutely kills it. He really embodies what Step Up is. The preview screening was great because you actually hear his voice before you see him, and just hearing his voice, the entire audience ripped into applause.

The buzzwords in modern 3D have been "proscenium" and "subtle." But Step Up 3D has some of the boldest and best use of 3D I've ever seen, and Step Up Revolution is just as in-your-face. I think audiences are restless with 3D because in most films, it's not aggressive and obvious enough. What's it been like for the Step Up series to buck the industry trend and make its 3D so old school and fun?

I think that Step Up lends itself very well to 3D. When you're setting out to make a 3D movie, you have to ask yourself: "Why 3D?" A lot of times, movies get made without answering that question—or, they'll answer it for the wrong reasons by pointing to the box office. And then the 3D doesn't quite feel like it's organic to what the movie is. Whereas on Step Up, I feel like it's a great answer to, "Why?" What's better than seeing dancers alive and in front of you in 3D on the big screen, putting the moves and their steps right in the theater over the audience's head? It really makes sense. So from there, it just snowballs. I wanted to break proscenium because dance wants to be in 3D. If it's just a film with a bunch of people talking, it's hard to take advantage of that.

What's it like to be holding a camera in the middle of a huge group of dancers who are about to go nuts and do something big and complicated and coordinated?

It's joy, it's really joy. On these movies, you become such a family. Musicals are unique in that you rehearse for two months before you start shooting. On other movies, at the start of filming everyone's still playing the Name Game so you don't get that sense of all being together. There's an energy that dancers bring. We'll be on set during breaks and they'll dance—it's what they do. It's like when I've shot great singers. You call "Cut!" and they just keep singing. When you're rehearsing with people who are doing what they love and communicating with their bodies, there's just a magical quality to it. So when you finally get on set with 200, 300 people, the dancers are just this engine that creates an energy. For our finale, we built an entire shipyard and had hundreds of dancers. I remember shooting this moment where all the dancers are up on containers and it's just this massive spectacle of some of the best dancers in the world. I almost stopped directing for a moment because there's such a beauty to it—there's so much power in an image like that that you just get lost in it. That "Wow" is when I knew we were doing it right-that we were recording something really special and people were going to want to come to the theater and see it.

Watch the trailer for Step Up Revolution