close
It's more sinister than 'Triumph of the Will.' 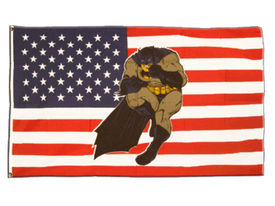 The Avengers represent a kind of FDR can-do ethos. They're cultivated by the government for the common good and don't exist as authority figures so much as the right tools for the right jobs. Most of them are even the product of government-run projects (The Hulk, Captain America) or government money (Tony Stark is a defense contractor, remember).

But The Dark Knight trilogy has always been ruled over by Ayn Rand. In it, true societal good is reached through the singular actions of a wealthy, powerful, selfish people. In The Dark Knight, Batman clamps down on the regular folk imitating his crime-stopper spree and indulges in kidnappings, violations of privacy, misappropriation of sensitive technology. Though he takes the fall for another man's crimes at the end, we're left with the sense that he's most interested in being a strongman, if that's what it takes to keep things stable.

I went into The Dark Knight Rises convinced that I was in store for a crudely authoritarian paen to the joys of a police state. But I was wrong. When the curtain finally fell on Nolan's Bat trilogy, it turned out he hadn't made a modern Triumph of the Will in tights. He'd turned out something far more sinister.

In the current political climate, the most insidious problem is the notion that when two opposing parties disagree, the solution is to split the difference. It's why discussions of raising taxes on wealthy people are paired with attempts to simultaneously gut social security benefits for the poor. It's why the Affordable Care Act is predicated on making sure everyone has access to a product they absolutely hate (private insurance), and certain religious groups are exempted from providing basic health care despite the fact that they enjoy the benefits of federal funding. It's even why televised discussions of civil rights tend to ostentatiously feature appearances by bigots who should be ignored, or even mocked.

And it's apparently the only thing that can save Gotham City from total destruction. Or so I gathered over the course of The Dark Knight Rises.

Much like the centrists making American political discourse so maddening, Christopher Nolan's final Batman film constantly engages in infuriating difference-splitting whenever it counts. Take Anne Hathaway's Catwoman, who is implied to come from a humble background, was compelled to be a criminal, and now wants to erase her criminal record and start over with a clean slate. She even says outright that some people are forced to do "whatever they have to," unlike the privileged few like Bruce Wayne. It's a nice touch, and a theme worth exploring. But it's strongly undermined by the film's other villain, Bane.

Bane is a cartoonish parody of left wing radicalism. He's basically a living version of that stupid Che shirt, only wearing a hideous mask instead of a dashing goatee. He calls out for the poor to take back their city (while, of course, plotting out their nuclear destruction) and by the end of the film, it almost feels like Nolan's become uncomfortable with his own creation: a villain who decries legitimate economic inequality. And so he scrambles to balance it out by proving that those Occupy kids are susceptible to manipulation by con artists, which, you know, is just what your angry Republican dad said last Thanksgiving.

The film becomes even more troublesome in its depiction of the average, non-super citizens of Gotham City—you know, the ones actually affected by all of this chaos. They play almost no part in the matter, other than to be killed or saved as the plot demands. And the majority of the police are cynically detached, cowardly, oblivious, and ineffective. (How did such a useless law enforcement apparatus bring peace to the city for eight years. The magical, never-explained "Dent Act," duh.) Bane instantly neutralizes them, where they stay until Batman arrives to save them. Yes, police officers fight alongside Batman in the thrilling climax, but their actions have no effect: they fight and die just to provide thrilling background chaos while the big boys hash things out.  Even the U.S. Government—you know, the same one that recently managed to send a SEAL team into Pakistan to kill Osama Bin Laden?—merely surrenders and stands by on the sidelines.

The uncomfortable fact is that in the end, every single important decision in The Dark Knight Rises is made in the shadows by extremely powerful individuals, making Nolan's Batman universe ultimately about a fight between "good" rich people and "bad" rich people. The bad ones use populist, smash-the-system rhetoric to exploit the common people, and the good ones advocate for the continuity of the stratified system, but have a soft spot for the poor.

And in the end, Bruce Wayne skips the country to relax with his new girlfriend, whose thievery and murders are forgiven because Batman wants to bone her. After all, he's more powerful than the law. (This is, by the way, a crucial violation of Wayne's own values going back to the first film.) Compounding things, we never actually see what happened to Gotham City after the occupation, nor do we see what happened to a United States willing to let an entire city be claimed by a goon squad. Opinions don't matter, outcomes don't matter. All that really matters is that our societal better Bruce Wayne is happy.

Instead of a confused argument against democracy and pro-Rich People Powers, I'd have almost preferred that The Dark Knight Rises be expressly about making Bruce Wayne dictator for life. It's sad that a film capable of inspiring such powerful discussion, not to mention powerful tragedy, is so empty. Did Nolan set out to make the ultimate ode to ceding control to our betters so we don't worry our pretty little heads? Doubtful. But it's the unfortunate result of a film that refuses to take any position at all.