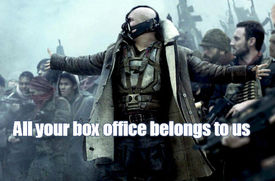 At the time of The Dark Knight’s release in July 2008, only one film had ever crossed the $500 million box office benchmark in North America. That film was 1997’s Titanic ($600.8 million)

In fact, the next closest any film had come was the original Star Wars ($461 million) but even that tally included grosses from its many re-releases (although it certainly doesn’t account for the decades of inflation that work against it on all-time charts), which technically then made 2004's Shrek 2 the second highest-grossing single run in non-inflation-adjusted history with its $441.2 million haul.

To put these numbers into further perspective: before The Dark Knight, only seven films had ever crossed even just $400 million. In the four years since, that number has doubled—an astounding surge that includes The Dark Knight ($533.3 million) itself. Furthermore, two other films have since crossed Titanic's once seemingly insurmountable $600 million plateau: Avatar ($760.5 million) and Marvel’s The Avengers ($614 million and a bit to go)—although, both films had considerable help from premium 3D prices to get there.

In short: during the near-half decade since Batman last appeared on the big screen, the box office rankings have seen some significant shifts. With higher ticket prices and 3D surcharges countering the declining ticket sales, the top 50films on the all-time domestic list look different every few years. Where standalone films such as Forrest Gump, The Lion King, Home Alone, and Independence Day used to rule the top 20, they’ve been usurped over the past decade by Hollywood’s driving cash cows known as “franchises.” As of today, 72% of the top 50 grossers are part of a series.

Why is all of this important to The Dark Knight Rises? Because $400 million—not long ago considered the upper echelon for uber-blockbuster status—is "the new $300 million.” It's also important because, arguably, for the first time in history we have a film that is a virtual lock to reach that former number. Sure, we’ve seen a few films blow by it over the last four years. But with so few precedents before them, most industry analysts were either skeptical that it could happen or downright never saw it coming.

The finale to Christopher Nolan’s Dark Knight trilogy is different though. Here’s why:

Consider the trilogy that began the new millennium as the most anticipated series of all-time: Star Wars: Episode I – The Phantom Menace. Still claiming the most tickets sold of any film since Titanic, the George Lucas prequel may have disappointed fans but audiences still turned out in droves. It is by far the most attended franchise since the original trilogy itself. But thanks to the first prequel not living up to expectations, its sequels still relatively suffered. Even the hugely anticipated finale, Revenge of the Sith, didn’t quite reach $400 million in 2005 despite boasting the best reviews and word of mouth of the new set of films. That simultaneously proves the power of Star Wars even in the face of fan backlash ($380 million was still a massive number seven years ago), while also proving that even the hugely anticipated transformation of Anakin Skywalker into Darth Vader couldn’t completely recover the fans lost by Episode I.

The good news in favor of The Dark Knight Rises: the Star Wars finale’s $380.3 million gross adjusts to almost $470 million with 2012’s ticket prices. Even better news: whereas those prequels shed fans due to their low quality, Nolan’s Batman movies have taken the opposite trajectory by actually gaining more fans than existed before Batman Begins (which opened, ironically, just one month after the final Star Wars movie).

There is, however, an upside to franchise trends. The Jason Bourne and Toy Story series increased in gross with each installment (although the latter stayed relatively flat in ticket sales between Toy Story 2 and Toy Story 3). The secret? Critical acclaim and strong word of mouth. Those two series are living proof of audiences increasing in numbers when the sequels are actually worth their while.

For every Bourne and Toy Story though, there is a Matrix, Pirates of the Caribbean, or Shrek. Those three franchises kicked off with a bang: they redefined—and even created—their own sub-genres while becoming huge word of mouth-driven hits. All three had second acts that were hugely anticipated, though one completely missed the mark: The Matrix Reloaded may have out-grossed the first hit film, but word of mouth worked against it…and all sequels pay for the sins of their predecessors. As a result, the third film in the trilogy, Revolutions, dropped nearly 49% in gross.

Pirates and Shrek, however, delivered well-liked sequels that each crossed $400 million and solidified their statuses as two of the biggest franchises in history. In 2007, though, their third films flopped with fans and both lost over 30% of their middle chapter's audience. Grossing $309.4 million and $322.7 million, respectively, we have to wonder how much more those third acts would have grossed had audiences liked them as much as the first two.

Even the Transformers “trilogy” (using the term somewhat loosely) suffered a similar trajectory as the Matrix series, though its mainstream popularity still helped to carry it to great heights despite the poor reception of the second film.

The Spider-Man trilogy is an apropos example of superhero series that choked in the last at-bat. Among fans, there has always existed an apparent “curse of the comic book three-quel”: Superman 3, Batman Forever, Blade: Trinity, X-Men: The Last Stand. Spider-Man 3 sits alongside those letdowns as one of the most divisive and ill-received superhero blockbusters in history. Despite breaking the opening weekend record in 2007, Spider-Man 3’s near-toxic reception among older crowds and fans sent it to a disappointing 19% drop in ticket sales from Spider-Man 2—a film that upon its release was widely heralded as the best superhero film of its time.

Without the huge kiddie appeal of the character, it’s unlikely that the third Spidey would have even crossed $300 million. With a stronger film, however, there’s a good chance we would be looking back on how *that* franchise was the first to deliver multiple $400 million grossers. Alas, we aren’t.

The Harry Potter series is perhaps the most complicated to dissect. Comprised of eight films, we can only subjectively pinpoint which ones form a true “trilogy.” The highest ticket-seller of the series came with the first 2001 film, so no matter what comparison we make, the franchise was downhill from the start.

That being said, the Potter franchise found remarkable consistency in quality and reception among fans. A steady flow of ticket sales followed after the initial drop-off from the huge mainstream curiosity in the first film. The end result was that the grand finale, Deathly Hallows Part II, became the highest unadjusted grosser of the franchise but third overall in tickets sold among what we've pinpointed as the trilogy (behind Sorcerer’s Stone and Goblet of Fire). The series stands as evidence that no matter how strong the fan base, mainstream audiences simply find it hard to maintain interest in a continuous series being delivered on a yearly basis beyond a few outings.

Lastly, there’s the trilogy that usurped the Star Wars prequels as the definitive blockbuster series of the 2000s: The Lord of the Rings. The Peter Jackson-helmed franchise achieved the rare feat of increasing in ticket sales with each installment, something that was unprecedented at the time for a series of its box office stature. Rings was the first franchise to gross over $300 million each time out, and today all three films adjust to over $430 million when accounting for ticket price inflation. That series serves as a strong—if not perfect—comparison to the current Batman trilogy, assuming that reviews and early reactions indicate that The Dark Knight Rises lives up to audience expectations (something Rings is famous for having achieved with its second and third installments).

Rings thus sets a precedent by which to make Rises a contender for matching or exceeding the ticket sales of its own predecessor. It won’t be an easy feat since The Dark Knight sold more tickets than any Rings film, but when considering that Nolan’s trilogy is arguably the reigning definitive series of this decade—well, there are more than a few parallels to draw. 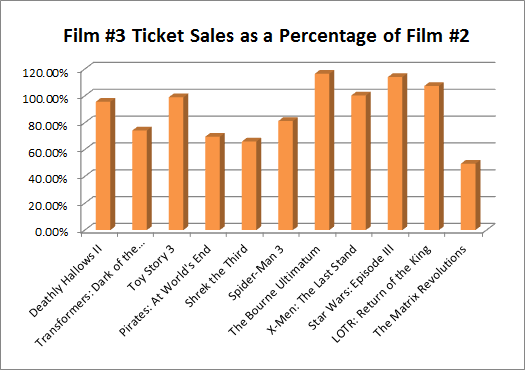 Of the 11 modern blockbuster franchises we’ve researched, the third film in the series retained an average of 90.8 percent of the second film’s audience, as measure in ticket sales. If The Dark Knight Rises holds to that average, it would be on target for a gross of at least $534 million—just a hair more than The Dark Knight's unadjusted gross, interestingly enough.

Nine of those franchises saw their second acts receive word-of-mouth relatively as positive as the first film’s (if not stronger in some cases). Since The Dark Knight certainly falls in that category, we can narrow down the likely trajectories for its own three-quel to those nine sequels and their “act three” closers.

Of those nine series that maintained quality, five of them yielded third films whose word of mouth didn’t suffer in comparison (Deathly Hallows Part II, Toy Story 3, The Bourne Ultimatum, Revenge of the Sith, and The Return of the King). Note: An argument can be made for X-Men: The Last Stand which did increase in ticket sales, but its word of mouth was noticeably poorer than the first two installments. Let's include it anyway.

Now take those remaining six films and we see that they all stayed relatively flat or increased in ticket sales with their final entry. (Including Hallows Part II, which was on par with Goblet of Fire's admissions—the actual middle point of the series—and increased from the penultimate Hallows Part I).  If The Dark Knight Rises holds to the average retained audience of those six finales (an optimistic 105.5 percent), it would land somewhere around $620 million domestically. 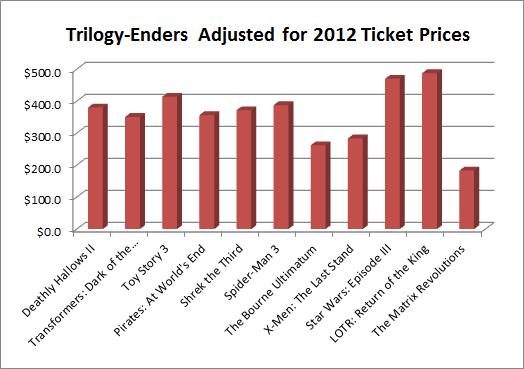 In terms of hard ticket sales, Rises’ ultimate goal in comparison to a trilogy such as The Lord of the Rings will be to land north of $550 million. That’s still a tall order—and is by no means a pass-or-fail line—but it would begin to put the film in the general vicinity of The Dark Knight’s $588 million inflation-adjusted gross (for 2012).

That said, The Dark Knight itself sold more tickets than any single franchise film in our comparison (excluding The Phantom Menace) which means it has the highest standards to live up to. Truthfully, we’ll never know just how huge the last two Star Wars prequels could have been had that first one lived up to its own absurdly high expectations.

But we might get an idea with The Dark Knight Rises.

If audiences embrace it in the way that they have every Christopher Nolan-directed blockbuster so far, this trilogy won’t need 3D or its premium upcharges to rewrite franchise records. Perhaps more importantly, it could send a strong message to Hollywood: quit while you’re ahead. No matter how much we as audiences and fans love returning to our favorite characters, realistically the creative well runs dry and the box office take suffers. For evidence, look no further than the fourth installments of Shrek and Pirates of the Caribbean.

Christopher Nolan and his team get those realities, and his devotion to the three-acts-and-done saga of Batman could be one of the biggest legacies he leaves behind. Let us hope that instead of trying to simply mimic his films, other studios and writers/directors will take this series' responsible structure to heart in an age of persistent comic-to-screen adaptations and overwhelming sequel fatigue.

Please note: the eleven “modern” franchises in this research included Harry Potter, Transformers, Toy Story, the Bourne series Pirates of the Caribbean, Shrek, Spider-Man, X-Men, the Star Wars prequels, The Matrix and The Lord of the Rings.