close
Ben Stiller, Vince Vaughn, Jonah Hill, that other guy...or none of them

Which Star Will Make People Want to Watch 'The Watch'? 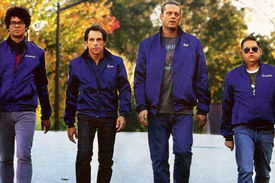 The Watch was supposed to sell tickets based on the sheer hilarity of Ben Stiller, Vince Vaughn, and Jonah Hill joining the neighborhood watch. After the real-life shooting this spring of a 17-year-old by a neighborhood watch volunteer, that strategy was impossible. Fox quickly tweaked the film's poster, trailer, and title from Neighborhood Watch to The Watch, but the rebooted campaign never recovered. Given the non-starter marketing, the film is forced to rely on its star appeal to fill the seats. But how much can each actor contribute—and who is the biggest draw?

Ben Stiller has the biggest name recognition, thanks to films like Meet the Parents and Zoolander which made him a household name and gave him an average domestic take of $80.3 million. (By comparison, Tom Cruise averages $97.5 million and Jason Segel, $68 million—all unadjusted for inflation.)

But Stiller hasn't had any recent hits. The last sequel to Meet the Parents, Little Fockers, came out in 2010, and last year's Tower Heist was mildly funny and massively forgettable. And kids who gobbled up tickets for the Madagascar and Night at the Museum franchises can't get into The Watch without a parent. So sure, Stiller's still recognizable—but he's no longer a heavyweight.

Vince Vaughn is the film's second-most recognizable name, although you wouldn't know it from his statistics. Despite having $200 million plus hits like The Lost World: Jurassic Park and Wedding Crashers, Vaughn has a tendency to dabble in itty bitty indies. One, I Love Your Work, earned all of $3,264. Thus, his average at the box office comes out to a disappointing $59.1 million, far under Segel, who's considered an iffy draw himself.

And like Stiller, Vaughn has had little to flaunt recently. Last year's The Dilemma ended in the red, and his while two previous efforts—Four Christmases and Couples Retreat—were financially successful, the target audience for those rom-coms hardly overlaps with The Watch. Vaughn's contribution to The Watch's box office is therefore likely low.

Then there's Richard Ayoade, a comedian so unknown the only people he'll attract to the film are his family members. (Hi, Mama Ayoade!) His most recognizable role was on the British television series The IT Crowd, which ran from 2006 to 2011. The Watch isn't just his first starring role in a big budget Hollywood movie—it's his first substantial film role period. If you're wondering how a nice British boy like him ended up in a dirty American comedy like this, it's because he wrote and directed an indie British comedy last year named Submarine, which Stiller produced. Let's be frank: the studio probably needed to balance out the overwhelmingly white cast, and with the hefty salaries of Stiller, Vaughn and Hill, they chose the cheapest non-Caucasian comedian they could find. And since Ayoade is a charming talent who could use a U.S. break, it's a win-win.

Which brings us to Jonah Hill. At age 29 and just five years into his starring career, he already has an impressive box office average of $82.3 million—the highest of all. Plus, his recent hits like spring's $138.4 million success 21 Jump Street tap into the same demographics The Watch is targeting. Furthermore, his Oscar nomination for Moneyball won him traction with older audiences. All this makes Hill the most promising audience draw of the group. Not bad for the youngest kid on the block. His multimillion dollar question: can he sustain his success?

Average Stiller's $80.3 million, Vaughn's $59.1 million, and Hill's $82.3 million (and leave out Ayoade's entire lack of figures), and Fox could reasonably hope for domestic payday in the range of $74 million. A modest success, but these Stiller and Vaughn have to start looking for their next role now—The Watch won't do much for their dwindling careers.