close
17 of the top 20 superhero movies were released in the last decade—what's going on?

Why We Need Superheroes 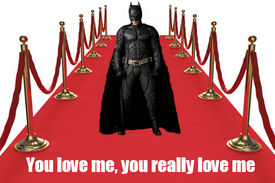 If you talk to the kids standing in line for The Dark Knight Rises, they'll not only tell you that these movies are the "best thing ever," but that the superhero genre has been around forever. But the explosion of these super-movies is a recent phenomenon—of the 20 biggest superhero flicks, 17 of the top grossers were made since 2000. Why have we become so drawn to men in tights?

First, let's look at when we weren't. Most of our major heroes—Superman, Batman, Captain America—were invented on the cusp of World War II after of decade of depression turned into a long stretch of aggression. We needed heroes. And then in peacetime, we didn't. Superheroes had little adult relevance in the '50s and '60s: the United States was on a stable, prosperous path, and despite the threat of the Cold War, things were on the up and up. Only children, who always feel small in a world they don't understand, needed the reassurance of Batman during Saturday morning cartoons.

But with the end of the Vietnam War, the continuing reverberations of Watergate, and the never-ending Cold War, 1978 was a time of great national uncertainty. Cue Superman: The Movie, starring Christopher Reeve. Jaded audiences weary of equally jaded movies like Network and Taxi Driver were charmed by the unconscious naiveté of Clark Kent, who felt fresh when contrasted to Lois Lane's unapologetic snark. When Kent uses the word "swell," she groans, "There are few people left in the world who feel comfortable saying that word." Superman was the second biggest hit of the year—the first superhero movie to make a dent in the box office in decades.

In many ways, the last decade of American history reads like a comic-book: things were calm and content—too content?—until we were struck by an unknown terror that people are both unprepared to face and incapable of defending itself against. More than ever before, our world is overrun with problems that seem to have no good solution: global warming, the Israeli conflict, the economic collapse, rampant ennui. It's not that the States has become so overgrown with crime that it needs a vigilante to solve our problems. It's that our problems feel too big for any ordinary man—even the President—to solve.

Superhero movies are equipped to provide everything that the real world so inconveniently lacks: beautiful people, gorgeous places, fantastic powers, clear distinctions between good and evil, and satisfying resolutions. And these heroes are guaranteed to win. Bane may break Batman's back, but do who really thinks The Dark Knight Rises would dare end with Bane in triumph? Plus, giving $12 bucks to the latest superhero flick is our way of fighting against cynicism—we're saying that for two hours, we want to watch a hero fight the good fight, and a villain get punished. And we definitely love seeing a kitten get rescued from a tree (an actual scene in Superman: The Movie). Superhero movies let us dwell on the cosmic differences between right and wrong, truth and lies, heroism and cowardice. What's more, they don't have to defend themselves from being deemed "corny"—the platitudes are the point. And yes, with great power does come great responsibility.

Thus, in superheroes we get the whole package. We protest that we simply want to go to the movies to see Anne Hathaway in spandex and Christian Bale in leather, but we're really shelling out cash and time for a group therapy session. It's a tough world out there, and in times like these, we need a hero. Or 17.