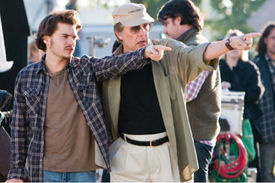 There's no pea soup in William Friedkin's Killer Joe, but there is a soon-to-be-infamous bucket of fried chicken. Based on the play by Pulitzer-winning playwright Tracy Letts—author of August: Osage County and of Friedkin's last film, Bug, a motel psychodrama starring Ashley Judd and Michael Shannon—Killer Joe is named after Matthew McConaughey's Killer Joe Cooper, a Texas cop who's also a hitman for hire. Calm, polite and severe, McConaughey agrees to whack Emile Hirsch's drunk mom for her insurance money, a paltry fortune of a few thousand dollars. But when Hirsch can't come up with his fee in advance, McConaughey insists on collateral: Hirsch's sister Juno Temple, a mentally challenged trailer park teenager who's being pressured to romance her mother's killer. (Their father Thomas Jane and his live-in girlfriend Gina Gershon have no problem with pimping her out.) From there, things get really wild. And bloody. And intense. Killer Joe was rated NC-17 by the MPAA—a first for a Matthew McConaughey film—and while Friedkin isn't happy about the decision, he agrees that it's definitely not a film for kids. (Or people with a hunger for KFC, the co-star of Killer Joe's craziest scene.) When he's got the Pulitzer Prize on his side, why would Friedkin be scared of a ratings board? Hell, as he explains here, when Friedkin was a newbie director, he wasn't even afraid of angering Alfred Hitchcock.

It's written by the Pulitzer Prize-winning playwright Tracy Letts, and you seldom see the Pulitzer Prize in Drama given to a pornographer. He's arguably one of the two or three best writers in the country today. The film is the opening night of the Edinburgh Film Festival, the oldest film festival anywhere which has been very conservative over the years. It's a very brave decision on their part. On July 23rd, there's going to be a New York Times talk about Killer Joe with myself, Tracy Letts, and Matthew McConaughey, and then there's going to be a screening at the Lincoln Center. These organizations aren't prone to promote extreme violence and pornography. I don't think it's an incorrect rating because none of us are trying to target young teenagers to see the film. It's a very adult film and it's extremely intense. I believe they rated the intensity, because there are many more examples of disturbing films like The Girl With the Dragon Tattoo that have not gotten an NC-17.

Your films like The Exorcist have always been incredibly intense. Over your career, have you seen a change in what shocks an audience?

Not really, but I will say this: if The Exorcist came out today—and next year is the 40th anniversary and there's going to be a special screening at the Smithsonian—it wouldn't even be rated NC-17. It'd be rated XX. Especially in terms of Killer Joe. There's just no comparison in terms of the content, both visual and in the language, that would get that film the R that it's had for four decades. I don't believe that audiences have gotten more conservative, although if you look at most of the films that have come from the major studios, they're basically adaptions of comic books and video games. Nevertheless, there is an audience for adult films.

When you describe the plot of Killer Joe—a loser hires a controlling cop to kill his mother and gives him his sister as a down payment—it sounds like a dramatic thriller. But watching it, Killer Joe also plays as comedy.

Killer Joe is absurd in its own way—it's kind of like the films of Sacha Baron Cohen. They're not attacks, they're satires. Killer Joe is very funny.

People know Matthew McConaughey for playing it cool. What in him made you realize he could play scary?

Number one: he's a very good actor, which a lot of people haven't recognized because he's so good-looking. His career has been limited to playing the handsome boyfriend. That's usually what happens to an actor if he has that kind of appeal. But McConaughey has always wanted a different sort of career for himself. If you look at the last few films he's made, they're all more serious than the romantic comedies for which he's known. At this point in his life, he wants to stretch as an actor. When I met with him, I learned that was born and grew up in that area of Texas where the film is set. He's moved out of Hollywood and back to Austin, Texas and he knows that area and its people very well. He has the right accent—he doesn't have to put it on. And he has a first-hand knowledge of the kind of characters depicted in Killer Joe. He was on-the-nose for me, so I didn't pay attention to the romantic comedies where he was not called upon to give that much of himself as an actor.

And paralleling that, here—like you did with Linda Fiorentino in Jade—you've also made a point of creating female characters who are more than just the girlfriend. They have their own set of flaws.

Absolutely. The Gina Gershon and Juno Temple roles are very complex. They're by no means the wife or the hanger-on. They play pivotal roles in this picture, as do all of Letts' characters. Letts' work is comparable to the best of Tennessee Williams, Truman Capote, Eudora Welty, and others who have written about the American Southwest.

Do you think today's theater is taking more risks than film?

Theater is thought to be more for adults. There's no ratings board for theater. I learned everything I know about drama from the year I worked with Harold Pinter. But film is a more popular medium and you tend to get less-adult audiences than you do for a play. Plus, in the theater world, whatever is written is sacrosanct—it's up to the producers if they want to do it or not, but the writer is under no compulsion to make cuts.

With Bug, you launched the career of Michael Shannon. What's it been like to watch him explode—he's General Zod in the next Superman movie.

Tracy Letts literally discovered him sitting in a park one day in Chicago. He had no particular idea what he wanted to do with his life and Tracy Letts just struck up a conversation with him and said, "Why don't you go to acting school?" Tracy is the playwright-in-residence at the Steppenwolf in Chicago and he later wrote some plays with Michael Shannon in mind. He's getting a lot of work now, but Bug was his first film. [Editor's note: Technically, Shannon had already played minor roles in movies for 15 years.] I stayed with him even though there were other very good and very well known actors who wanted to do his part. When I met Shannon at Tracy's suggestion, I immediately knew that he understood the character very well and that all I had to do was get out of his way.

Does he represent a new breed of actor? He's intense and so off-kilter.

Dustin Hoffman changed acting, too. When he achieved stardom in the '60s, there were very few guys playing leads who were short and not extremely handsome. The movie stars were Clark Gable, James Stewart and Cary Grant—and now, we have very few actors like them. George Clooney and Brad Pitt stick out. Ben Stiller is a direct result of Dustin Hoffman and his phenomenal acting abilities. Shannon fits into that category. He has a pretty wide range as an actor, but it was difficult for him to get film work. He was mostly working in Chicago theater and off-Broadway. I don't know what would have happened to his career if I hadn't given him the lead in Bug.

There was some talk last year that you and William Peter Blatty were teaming up again to film his new book Dimiter. Is that happening?

I wrote a nice review of it in the Huffington Post and gave it a plug, but no. The idea that I was going to direct it went around all the blogs, but we have no plans to make a film of it.

Is it true that Alfred Hitchcock gave you an order that a director has to wear a tie?

On the only occasion when I met him, I was very young and I was shooting the last episode of the Alfred Hitchcock Hour. Hitchcock had very little to do with the shows. He would just come in, read his introductions, and go home. But he was brought on the set by Norman Lloyd, the producer of the show who also hired me, and brought over to me while I was rehearsing a scene. I told him how honored I was to meet him, and he extended his hand like it was a dead fish and said to me, "Mr. Friedkin, I see that you're not wearing a tie. Julliard directors wear ties." I thought he was kidding, so I laughed it off and said I must have forgotten to put one on that morning. And he was gone. Walked away. And then about four years later when I won the Director's Guild Award for The French Connection, I see Hitchcock and his family at the table right below me. So instead of going backstage to do press, I walked down toward him with my award wearing a rented tux and one of those snap-on bowties. I snapped my tie and him and said, "How do you like my tie now, Hitch?" He just stared at me—he had no memory of it—but I, of course, carried that with me for years.

Wait—but did you wear a tie to the Hitchcock Hour set the day after he sniped at you?