close
From George Clooney to Steve Martin, who did retro best?

O Brother, Am I Accurate? We Rank the Fictitious Great Depression Flicks 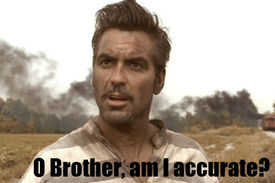 Lawless, starring Tom Hardy, Guy Pearce and Shia LaBeouf, is a violent depiction of that wild moment when the Great Depression and the Prohibition era intersected. Set in a remote Virginia backwater that feels as far from Civilization and the rule of law as the moon, it's full of the hypocrisy that stems from illegalizing something everyone wants. It also nails the way people desperately needed heroes, particularly those who love sticking it to the Man (whoever the local Man happens to be).

That period from 1919 to the beginning of World War II was crazy. Nazis, Fascists, all that prewar scary stuff happened, of course, but closer to home, America spent nearly two decades turning people into criminals. First, alcohol was outlawed by the 18th Amendment, which made gangsters wealthy, but did little to actually curb drinking. Then, a decade of crony capitalism produced the the 1929 stock market crash and the subsequent worst depression in recorded history. Mass poverty, colorful criminals—no wonder Hollywood loves this era.

But does Hollywood get it right? Let's examine four movies that try to capture the Depression era and rate them according to the Gold Standard of the period: The Grapes Of Wrath's ex-con, labor activist, and scab-killing protagonist Tom Joad.

Paper Moon is notable for pairing Tatum O'Neal with her father, Ryan, and for crowning her the youngest-ever winner of the Academy Award for Best Supporting Actress, a record still unbroken (sorry, Fannings). It follows the adventures of a con artist and the 9-year-old girl alleged to be his daughter as they wander around Depression-era Kansas and grift people out of their money via a Bible-sales scam.

The film captures the sense of inactivity that gripped the country as its economy ground to a halt, and also does a nice job reminding us that the good old days weren't so good—not so long ago, people were perfectly fine subjecting children to terrible deeds instead of organic baby carrots. However, the weirdest thing about Paper Moon is that it never feels particularly period. Despite his blonde mustache and white fedora, Ryan O'Neal looks like a man wearing a costume. Tatum, however, is swell.

Tom Joad Accuracy Index: 6/10. Paper Moon is a wonderful movie, and its depiction of dirt-poor shysters in the most impoverished part of the country helps establish the dire straits affecting the nation at large. But Ryan O'Neal still looks like a guy aching to get off the set and smoke weed in Malibu.

This amazing remake of a BBC mini series must be seen to be believed. Steve Martin plays sheet music salesman Arthur Parker, who ekes out a meager living for himself and his young wife in 1934 Chicago. Desperate to open his own music shop, he's denied a loan by the bank and his wife refuses to use the money she inherited, prompting the petulant Arthur to embark on a disastrous affair that eventually leads to his mistress being turned into a prostitute and himself accused of murder.

What makes it the best thing ever is that it's also a musical: the entire soundtrack is composed of period recordings, lip synced by the cast. This not only illustrates Arthur's fantasy of living in a world full of the music he loves, but solves the problem of bad reworkings of period music sung by people who can't really sing. With elaborate dance numbers and amazing stage craft, not to mention all the crime, adultery and poverty, it might be the most 1930s movie ever made.

Tom Joad Accuracy Index: 10/10. Nothing is bleaker than seeing a dreamer ruin his life chasing a dream. And nothing is happier than seeing him do it to incredible music. Even if you know he created his own mess, Arthur was dealt a bad hand from the beginning (hey thanks, Great Depression). Nothing nails America's 1930s mess more than that.

People forget that Little Orphan Annie began in 1924, a full five years before the Great Depression, and that far from being a critique of a cruel, capitalist world that produced malnourished waifs, it was in fact a celebration of the fabulously wealthy as the best our society had to offer. After FDR was elected president in 1932, nosey government bureaucrats and New Deal do-gooders replaced gangsters and thugs as the strip's primary villains. No, seriously. The reason we forget these unpleasant facts is 1982's Annie, and the populist 1977 musical on which it is based, which features some of the greatest songs ever written, and of course, Tim Curry with a smart mustache.

Annie took cartoonist Harold Gray's love letter to oligarchy and turned it into a period piece in which Great Depression was as important to the story as Annie's dead parents. A major plot has FDR convincing Daddy Warbucks to support the New Deal during the musical's signature song ("Tomorrow"), and FDR is established as one of the story's inarguably good and decent characters, as noble as Annie and Punjab. Meanwhile, Miss Hannigan forcing impoverished children to toil in a workhouse orphanage puts the horrors of the era in context.

Tom Joad Accuracy Index: 8/10. Annie's score is hindered only by the fact that the film doesn't end with Daddy Warbucks renouncing his wealth and moving to Mexico City to live with Trotsky.

The Coen brothers' third most successful film hardly needs an introduction. A swamp-fed retelling of Homer's The Odyssey, it confirmed George Clooney's status as a leading man and helped spark a bluegrass revival thanks to an excellent soundtrack. It also positively wallowed in the tropes of the old deep south, with evil Klansmen, corrupt politicians, chain gangs, and accents so thick they sounded like cornbread.

O Brother's period detail is rich, the soundtrack authentic, and its portrayal of the Deep South is unexpectedly shrewd for two Jewish kids from the upper midwest. But the Great Depression itself is a mere afterthought. Once Clooney's ne'er do well grifter escapes from his chain gang, the plot is all about his quest to recover a stolen fortune. Aside from clothing, dialects and the appearance of the KKK, the only indication this is set during the Great Depression is that the fortune in question is about to be submerged under a man made lake as part of a Hydroelectric project almost certainly related to the Tennessee Valley Authority.

Tom Joad Accuracy Index: 4/10. It's awesome, but it's about as critical of the systemic problems leading to the Great Depression as a kitten is of its human's taste in television.