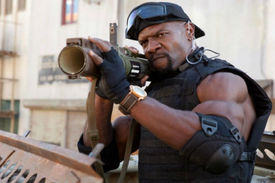 Football players have been hilarious long before Chad Johnson honored his jersey by changing his name to Chad Ochocinco. (Um, shouldn't that be Ochenta y cinco?) But few of them have gotten to make their living off of making people laugh long after they hung up their cleats. After seven seasons in the NFL, Linebacker Terry Crews took a couple serious, scary guy roles in Arnold Schwarzenneger's The 6th Day and in Training Day, the film that won Denzel Washignton an Oscar. Still, there was more—a lot more—to Crews than his muscles, and he made sure Hollywood knew that by racking up a dozen comedy roles in the next five years, playing everything from President Dwayne Elizondo Mountain Dew Herbert Camacho in Mike Judge's Idiocracy to Chris Rock's crazy-frugal pops in the sitcom Everybody Hates Chris. Now that he's proven he knows how to time a punch and a joke, Crews is picking roles that play up both his strengths—and he's found his perfect fit in The Expendables franchise as Hale Caesar, the guy who mowed down enemy soldiers to let his team take cover while yelling, "Remember this s--t at Christmas!"

Between the Fast and Furious films, there's a running joke that all the guys try to bulk up and get bigger than the each other. Did that happen here?

It did, to an extent. It was kind of weird because we're so old that it's not about bulking up, it's actually about cutting up. So the real competition is to be able to cut more than the other guy—less fat, that was the big deal.

I would say I did! Okay, I would say each and every one got exactly what they wanted to be.

Can I just say how much I love your character's name of Hale Caesar?

It almost wasn't to be. There was a moment when Sly was thinking about doing something different and we all panicked and I said, "You gotta know that Hale Caesar is probably the best movie name of all time." And he said, "All right, you can keep it." And the rest is history.

You've done a lot of comedy, which means that you again get some of the best action film one-liners.

Sly is probably the funniest guy of all time, and one of the reasons he hired me was that he knew he could slip in some of the jokes that he wanted—he'd give ‘em to me. He's like, "Hey man, they want me killing people. You can say the jokes," and I'm like, "I win!" Comedy is probably harder than anything else in entertainment, because everybody knows what is serious. They know what action is, they know what scary is, but nobody agrees on what funny is. Nobody! But to make everybody laugh is the real, real skill.

And you've got to make people laugh as you're holding a gun and about to hurt somebody.

Yes! One thing I realized is I'm okay being vulnerable. Where a lot of action guys—even a lot of actors, period—have to be seen in this badass light, that's not me. I don't care if I look a bit silly as long as I do my role. Each character in The Expendables has a purpose. Nobody is really stomping on anybody else's territory. If you watch the film, you know, each one of us has our own thing. I know what my purpose is. If I were to try to do something that was a little more like Dolph [Lundgren], it wouldn't ring true. If you've ever sat in a bad movie, you just see people jostling for lighting and its corny and it never works. Sly was totally unselfish with what he gave each and every one of us and now with the addition of Chuck [Norris] and Jean-Claude [Van Damme], it's just beyond belief—you just get the whole gamut.

Is there anyone you're dreaming will join up for Expendables 3?

Wesley Snipes. I would love to see him in Ex 3, and also Steven Seagal and some new up-and-comers that I dunno if I wanna name them yet, because they may be negotiating. Those two names really ring true with me and would ramp this up even more than what it is. Because it always can go more. You think you couldn't do any more than the first one? We did a whole lot more than the first one.

There was such a gulf in action films when there wasn't a class of young up-and-coming successors to the ‘80s heroes.

Here's the thing: post-9/11, nobody believes that one guy's gonna do it anymore. You know what I'm saying? Once we see tragedy for real, you gotta understand that it takes a group, that we all have to bond together. I think that's the new breed of action hero. When times are good, you can believe that one guy can just swing through. But now, we all know how vulnerable we all are. And I think that's now more than ever. And that's the thing about The Expendables: on our own, we are nutcases. Literally! We really don't have a clue. It's amazing we're able to tie our shoes by ourselves. But when we are together, we are truly unstoppable. It's like, holy cow! You look at Christmas' character [Jason Statham] and his relationship with Sly, and Sly with just the loneliness of who he is and Hale Caesar [Randy Couture] just being an alpha male with no one to rule over. And then Jet Li wants his money. It's all warped and really dysfunctional. Dolph is just a psycho ex-drug addict. It's like, dude, you're really talking about celebrity rehab, part two, with every one of these guys. But now, we're together, and it's like, look out. We unify and we form Voltron.

You've been doing film and television now for a solid decade. How did you get used to watching yourself dispassionately and with a critical eye? Did it start with watching your old football tapes?

It's horrible. First of all, the first time you see yourself is the most horrifying experience ever. I'll never forget seeing myself in a movie theater and I'm 50 feet tall, and my nose is 10 feet wide, and oh my god, look at my lumpy head—and you thought you were handsome! That is the issue. You thought when you looked at that mirror image of yourself, "Wow, I look great today," and you look at yourself in a movie and you realize, "Oh my god, I look like a creature from some other place." The only thing I can compare it to is if you've ever had to hear your own voice played back for you, you go, "That's me? Ugh!" You immediately don't like it. Now, do that times a thousand when it comes to a movie. That's why actors are so insecure. Liam [Hemsworth] is the only handsome guy in the whole series.

What? I think there are a lot of women who would disagree with that.

No, no, listen. There are no pretty boys. We are ugly, and we like it. We've learned to use that ugliness to our advantage. You can be ugly and sexy, too—that's not an issue, okay? Whereas Liam is just handsome. There's nothing you can do about it. The girls are going to swoon. And he did a great job, by the way. He had a lot to prove and he did it all. We were all impressed with what a good guy he is, and he came to work. It's no small feat to just jump in there with us and run with the guns, but he did and it was awesome.

You're also from Flint, Michigan. Do you and Michael Moore know each other from back in the day?

I met Michael Moore years ago and he's one of my inspirations for getting into entertainment. I mean, Roger and Me was one of the biggest movies of all time. It blew me away—and the fact that he was from Flint. He was at a book signing, and I went to see him and shook his hand, and this is back when I was actually playing football. And it's weird. We're kind of like Flint's favorite sons. I love what he's done for the city. He's got a great heart—I claim Michael Moore my brother.

By the way, your pec pop in the Old Spice commercials is incredibly impressive. I'd love to see you and the Rock in a pec pop-off, because that's also his move.

We're going to go on pay-per-view and we're gonna have a pec pop-off, me and Dwayne. Winner take all. It's the Pec Pop Olympics with us. I'll tell you how I learned my pec pop. My pec pop was from lonely nights. No dates, that's where that came from. Sitting there on Friday night while everybody else was out and just looking in the mirror. What can I do? Oh wait! Look at my chest! It just popped! Let me try it again on the other side! Ooo-eee! I've got a talent! And still no dates, and you go to bed, and you wake up and do it all over again. And I finally got married and found someone who will love me and now I can pec pop with her. She likes the pec pop. It's all good. It comes in handy.

Terry Crews on the special skills that make each Expendable unexpendable:

Sylvester Stallone: "He's just the boss. Whatever we're doing, he'll tell us how to do it 15 ways."
Jason Statham: "The suit-maker. That guy knows how to wear clothes."
Dolph Lundgren: "The salesman of the group. He's the one who would show you a mink coat in 100 degree weather in New York City."
Chuck Norris: "I see him as the teacher. He's like the high school principal who don't take no guff and you don't want to go to his office."
Jet Li: "The best massage in the group. He's got incredible hands."
Randy Couture: "He's your hardhat construction worker. That guy could build anything. He would be a guy that would come in and put an addition in your house in two days."
Terry Crews: "I am the cook! I'd be making sure they all had their veggie wheatgrass smoothies correct and I'd be slicing up steak and sitting up on the grill—and I would make some nice pasta on the side."