close
Sure, he said he'll be back. But do audiences still want him? 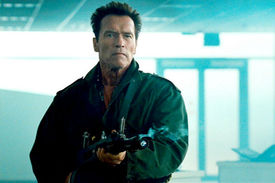 If I made a quarter every time someone cracked a Terminator joke about Arnold Schwarzenegger's return to the screen, I'd be as rich as the Governator himself. But with his divorce scandal still simmering, the debate remains: will he be able to launch a full-scale comeback, or be forced to slink back to his mansion and his millions? Here's the five questions that matter:

1) Is Arnold still good-looking?
Like any star, the first factor to consider is looks. If a comeback kid is no longer Hollywood handsome, their chances of renewed success plummet. Think of the heat Britney Spears took when she returned to the spotlight with a few extra I-gave-birth pounds. Or think of what happens to any child star over the age of eighteen: if you aren't as hot as you once were cute, say goodbye to a grown-up film career. Luckily for Arnold, he's kept much of his rugged mass, though he no longer has the muscle of a small ox, and if his skin is stretched thin over his bones, well, that look still works for Joan Rivers.

2) Is he too old?
At 65, Arnold's better qualified for Medicare than action roles. Older stars have trouble getting roles in general, much less launching comebacks. Diane Keaton spent the year after Something's Gotta Give being heralded as a forgotten treasure, only to be forgotten again by the time her resurrection hit cable. And no one wants to see a repeat of the Harrison Ford's stumbling, weary escapades in Indiana Jones and the Crystal Skull. But the studios don't seem worried: since leaving office, he's already shot three films in 18 months. Plus, he's still one year younger than Sylvester Stallone, seven years younger than Chuck Norris, and a whopping 17 years younger than Clint Eastwood—which means if he wants to become an over-rated critical darling and perennial Oscar nominee, he has plenty of time.

3) Is he too much of an uncool meathead?
The real issue, then, is his public image. A revitalized star not need to keep their original persona—Saturday Night Fever John Travolta, Pulp Fiction John Travolta, and Hairspray John Travolta are light years apart—but the trajectory has to make sense. In the ideal comeback, the star's revitalized image capitalizes on what made them popular in the first place. Young Drew Barrymore was loved for her adorable lisping in E.T., and her comeback cast her as a barely grown-up version of that sticky-sweet kid. Robert Downey Jr. was a badass before his drug-induced downfall, and his Ironman persona is curmudgeonly version of the same. And luckily for Schwarzenegger, he was and continues to be a muscle-bound meathead—and that's exactly what audiences still want to see.

4) Is he too politically divisive?
As a Republican in a Democratic state, he was bound to run into opposition, but no one would call his divisive years in office a resounding success. Millions of citizens united in support or opposition of him, not because of his virile image, but because of his policies and leadership (as odd as that may seem). His time as a public servant had little effect on his virile image, but instead of being dismissed as "only a movie star," he's now actually held responsible for his actions, and some of them have been doozies. Arnold spent his years in office trying to make the world take him seriously, and he might have succeeded too much. At least in California, I suspect it will be hard to see the man who vetoed gay marriage and tried to implement steep tax hikes as a credible hero once again.

5) But really, isn't he too much of a jerk?
Speaking of his actions, let's talk public disgrace. Every great comeback needs a nadir. Battling one's demons, beating addition, overcoming a crap husband—these public struggles earn a star sympathy and goodwill. But what if you are the crap husband? Getting a divorce after impregnating his maid is a two-fer of terrible scandals. Still, Hollywood sex scandals are no longer an automatic career killer. It took a decade, but Rob Lowe is now doing fine, and Breaking Dawn — Part II will probably earn a couple extra million thanks to Pattinson-Stewart break-up. But Arnold isn't just a Hollywood cheater—he's an elected official cheater—and politicians get judged far more harshly than movie stars. Just ask John Edwards or Eliot Spitzer. If he doesn't get a movie hit soon, he'll be in danger of being forced to join the club of disgraced public servants, whose philanderers have a long, ignoble retirement.

Taking a cold, hard look at the facts, Arnold's renewed box office success is guaranteed to be less than his former glory. He'll still attract audiences, but an old, comparatively scrawny, womanizing ex-governor is way less appealing than a young, Herculean, womanizing bodybuilder. Good luck fulfilling your box office dreams, Arnold—hopefully you'll do so better than you fulfilled Californians' expectations.