close
Because deep down, you're scared of Sylvester Stallone 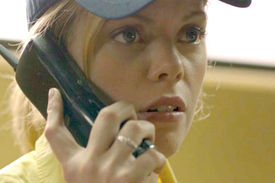 This teen fast food worker is about to have a terrible day in COMPLIANCE, our favorite flick of the week

WHY STOP NOW
Though it's got the sort of title critics can't help goofing on, it's got the kind of cast they love to champion. In this indie, Jesse Eisenberg is a college piano prodigy who's finally talked mom (Melissa Leo) into rehab. En route, her drug dealer hijacks them both, forcing them to go on the lam where neither pianos nor buffalo roam.
Directors: Phil Dorling, Ron Nyswaner
Writers: Ron Nyswaner
Stars: Jesse Eisenberg, Melissa Leo, Tracy Morgan
Genre: Comedy

COMPLIANCE  **OUR FAVORITE FLICK OF THE WEEK**
Disturbed by the events of WWII, psychologist Stanley Milgram created a test in which subjects are told by "authorities" to administer painful shocks to actors in a room. The test proved people invest in power even above their own morals, and in this based-on-a-true-crime thriller, that's what fast food manager Sandra learns when she gets a call from a "police officer" about a supposedly thieving new girl hire. She's putty in the hands of this faceless cop—even when he makes her do criminal things to the scared teen.
Director/Writer: Craig Zobel
Stars: Ann Dowd, Dreama Walker, Pat Healy
Genre: Suspense/True Crime

ROBOT & FRANK
Frank was a successful jewelry thief, so when age robbed him of his catlike reflexes, his kids bought him a robot-representing one more job stolen from America's workforce, and Frank's "companion." The two bond over their mutual obsolescence, and angle to re-enter the vivid field of cat burgling—they could share the score and one of them will never go to jail. It's a sure thing!
Director: Jake Schreier
Writer: Christopher D. Ford
Stars: Peter Sarsgaard, Frank Langella, Susan Sarandon
Genre: Sci-Fi/Comedy

DEATH BY CHINA
Area23a, an event distributor, puts out this doc about the damage that China's cheap products and labor take on our economy. When China entered the World Trade Organization, the companies that lobbied for their inclusion quickly began exporting their jobs to China. Half history-changer, half bait-and-switch, the economic ripples of China are 100% inspiration for job reform.
Director: Peter Navarro

SPEAK
Now that the Olympic games are over, we can return to the prolific batty competitions that litter our extracurricular landscape. Speak is about three people hustling to win the World Championship of Public Speaking: one abandons (I hope temporarily) his family to prepare, another incessantly rewrites, a third uses the competition as her opportunity to tell her story before it's too late.
Directors: Paul Galichia, Brian Weidling

UNTIL THEY ARE HOME
JPAC, or the Joint POW/MIA Accounting Command, was founded to uncover the remains of soldiers lost overseas. They bring the remains of an average of six servicemen to their forensic laboratory each month, which amounts to a considerable library and a spiritual re-uniting for men and women with families who've waited too long for them to come home.
Director: Steven C. Barber

THE CHILEAN BUILDING
During the reign of Augusto Pinochet, more than 3,000 opponents were "disappeared," and to this day most stories of disappearance hinge on the memories of children. In this undistributed documentary, we learn what happened to the children of the members of the Revolutionary Left Movement, whose children were cared for by "social families" while their parents bartered for their lives.
Director: Macarena Aguiló

BROTHER, CAN YOU SPARE A DOLLAR
During the Great Depression, the song "Brother, Can You Spare a Dime?" was as much an anthem of national unity as an admission of shared trouble and required support. Today, we have no anthem, but this doc suggests we're no less in need of one—just one adjusted for inflation.
Director: Thom Hoffman

SIDE BY SIDE
It's not just technology fans that evangelize the coming of digital projection. There are filmmakers, too, like Martin Scorsese (producer of this doc) who admits his love for classic film and celluloid but also says our theatrical trend towards digital—and therefore away from film—is good for the industry, the environment and the future of visual storytelling.
Director: Christopher Kenneally

DOCUWEEKS
Next time you're looking at the Oscar's Documentary Shortlist asking yourself, "Where did these films come from?!" the answer may just be DocuWeeks.The International Documentary Association's annual DocuWeeks is responsible for putting more than two dozen features and shorts in theaters annually, thus making those films eligible for Oscar consideration (more than 25 DocuWeek films have been nominated and seven have won Oscars). A newly minted distributor, DocuWeeks releases 17 features from the environmental to the personal. The run began 8/3 in New York and Los Angeles and continues this week to finish out August 23rd. Here's what's playing this week:

Know where the grass is always greener? Beneath the sea, a water world where gardens may feature few flowers but thousands of brilliantly colored creatures—and you can see them in Rodolfo Ogarrio's doc Gardens in the Sea. Or for more artful visions of a world less familiar, look into Of Two Minds. About three people with bipolar disorder, this doc finds that the dark parts of the mind can also be beautiful. Then there's two amazing tales of childhood accomplishment, first with a Michelle Obama-supported doc about elementary soccer teams, The Anderson Monarchs, and second in Without a Net, a Brazilian doc about kids who escape the dangerous street life through the circus and the flying trapeze. And finally, Egyptian doc Words of Witness follows an intrepid female reporter as she doesn't simply build the face of her modern journalism in Egypt but tries to forge a political future in her homeland.

THE AWAKENING
A cynical ghost hunter visits a boy's boarding school just after WWI, when kids missing their family members are seeing specters in the halls. On the one hand, pain and loss has always inspired people to turn to the supernatural for comfort—on the other hand the ghosts are kids, which freaks out the boys and make audiences fear an appearance of the little girl in Ringu.
Director: Nick Murphy
Writers: Stephen Volk, Nick Murphy
Stars: Rebecca Hall, Dominic West, Imelda Staunton, Lucy Cohu, John Shrapnel
Genre: Horror

BELOVED
Mother and daughter Catherine Deneuve and Chiara Mastroianni star with Ludivine Sagnier and Paul Schneider (yeah, that surprised us, too) in this Jacques Demy-styled French musical by Christophe Honoré. The singing is untrained and realistic, the love stories are wistful and tenuous, and the stars are bright in this film by the man who made Love Songs.
Director/Writer: Christophe Honoré
Stars: Chiara Mastroianni, Catherine Deneuve, Ludivine Sagnier, Louis Garrel, Milo Forman, Paul Schneider,
Genre: Romance, Musical; French-language, subtitled

CHICKEN WITH PLUMS
French heavyweight Mathieu Almaric stars as a musician who's fallen so out of love with life, he just gives up and starves himself. His children confusedly look on while his wife tries to woo him with the titular dish. With the same two-dimensional perspective of three-dimensional souls we saw in Marjane Satrapi's Persepolis, this film lures us to love through a sadness so poignant and accessible, it could set fire to word of mouth nationwide.
Directors/Writers: Vincent Paronnaud, Marjane Satrapi
Stars: Mathieu Almaric, Edouard Baer, Maria de Medeiros, Chiara Mastroianni, Isabella Rossellini, Golshifteh Farahani
Genre: Romance; French-language, subtitled

PAINTED SKIN: THE RESURRECTION
This martial arts film is proof America can't beat China, despite the Olympics medal count. A sexy fox demon breaks free of an icy prison and takes the shape of a seductress who woos and eats human hearts as she slowly becomes mortal. Meanwhile, a masked princess runs towards a guardsman who failed to protect her (hence the mask) to protect him from the Ice Fox Heart Chewer.
Director: Wuershan
Stars: Xun Zhou, Kun Chen, Wei Zhao
Genre: Mystery; Mandarin-language, subtitled