close
Because school's starting and it's time to feel smart 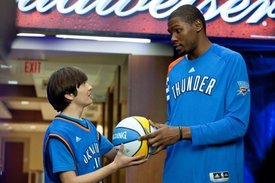 The OKC Thunder's Kevin Durant, the greatest player on the NBA's greatest team, stars in THUNDERSTRUCK, what's sure to be the greatest movie of all time

SLEEPWALK WITH ME
Some jokes are funny because they're true, others because they're absurd. But comedian Mike Birbiglia's favorite jokes about his sleepwalking habit are as absurd as they are true, so he made this film with the help of Ira Glass from NPR's This American Life. As much a documentary about a man facing the dark vacuum of the stage as it is a comedy about a man facing the dark vacuum of his future, this indie will build a loyal fan base, and recently had help from Joss Whedon who did a charming anti-ad for the film, cautioning viewers against seeing it because it could challenge the box office dominance of his blockbuster, The Avengers.
Directors: Mike Birbiglia, Seth Barrish
Writers: Mike Birbiglia, Joe Birbiglia, Ira Glass, Seth Barrish
Stars: Mike Birbiglia, Lauren Ambrose, James Rebhorn
Genre: Comedy

THE REVENANT
If the living dead really walked among us, be they vampires or zombies, they could go to stunningly good use as night-watchmen, sent to guard our streets from the criminal night dwellers our police force fails to see in the shadows. That's what happens to this fallen soldier when he returns from the dead and gets to take up a shotgun against the crime that eat America from the inside—the fact this flick is also a smorgasbord of body parts is just a bloody bonus.
Director: D. Kerry Prior
Writer: D. Kerry Prior
Stars: David Anders, Chris Wylde, Annie Abbott
Genre: Comedy/Horror

GENERAL EDUCATION
Levi is set to hit college on a tennis scholarship, until he fails to graduate. And so, he hatches an elaborate scheme to conceal his summer-school science class from mom and dad. But basic science turns to human sexuality when he meets hot Katie and has to choose between tennis and, you know, education. It's all just a chase to catch the ball when it's in one court...then the other court...then back to the first.
Director: Tom Morris
Writers: Tom Morris, Elliot Feld, Janeane Garofalo
Stars: Chris Sheffield, Maiara Walsh, Larry Miller
Genre: Comedy

THE VICTIM
If you watched TV's Hill Street Blues, you know Michael Biehn as Officer Buttman (please contain your inner juvenile). And if you don't know him from that, you know him as Kyle Reece, the guy sent back to save Sarah Connor from The Terminator. Here, he has his second career resurrection as a grindhouse writer/director with this story about a reclusive cabin dweller approached by sneaky, scantily clad women.
Director: Michael Biehn
Writers: Michael Biehn
Stars: Michael Biehn, Jennifer Blanc, Ryan Honey
Genre: Grindhouse/Action

THUNDERSTRUCK **OUR COMPLETELY IMPARTIAL, NON-BASKETBALL OBSESSED PICK OF THE WEEK**
NBA superstar Kevin Durant of the Oklahoma City Thunder—the most awesome team in the league—stars in this family movie about a kid with hoop dreams but no skill who meets the basketball superstar Durant. In one magic second, they swap athletic abilities. The kid's thrilled—he went from having less coordination than a cat on stilts to being the star of the high school team and an easy recruit for colleges—but what about poor Durant? The pressure's on and Kevin's friend Brandon Jackson has to do something-anything-to make thunder strike twice.
Director: John Whitesell
Writers: Eric Champnella, Jeff Farley
Stars: James Belushi, Brandon T. Jackson, Larramie Doc Shaw
Genre: Sports/Family/Comedy

SOMEWHERE BETWEEN
China's "One Child Policy" had a startling effect on the rate of children given to adoption agencies, and increased the ability of Americans to bring home children from abroad. This doc follows four Chinese daughters adopted by American families who wrestle articulately with their place as culturally American and nationally Asian. They call themselves "bananas"—white on the inside, yellow on the outside.
Director: Linda Goldstein Knowlton

SAMSARA
By the director of Baraka and co-writer of Koyaanisqatsi, this high pedigree documentary/experimental/art film is in a vein of incredibly rare works that try not just to look at important places, but unearth their sacred spirituality. Made in 70mm and built to inspire amazement, this one begs for the big screen treatment.
Director: Ron Fricke

WILD HORSE, WILD RIDE
Shot over the course of a 100-day domestication procedure, this doc watches three people tame a wild stallion for public auction. It's not just a feat of conquest—after capture, if a mustang doesn't learn the ropes in time, he runs the risk of being put down—so there's more than a curious itch keeping these guys devoted to training their horse. But they'll put a lot into their mustang and once he's up for sale, that bond will just be a memory.
Directors: Alex Dawson, Greg Gricus

NEIGHBORING SOUNDS/ O som ao redor
This middle class Brazilian neighborhood is already interconnected with family members living next door to each other and exerting their pent up frustrations erratically on their kin. Then an uptick in local crime hits the street at the same time as a private security firm comes extracting $20 from each house for protection. If you don't pay, then you're on your own—which is as it was before, but now worse.
Director: Kleber Mendonça Filho
Stars: Irma Brown, Sebastião Formiga, Gustavo Jahn
Genre: Suspense; Portuguese-language, subtitled

SHIRIN FARHAD KITOH NIKAL PADI
Farhad is a 45-year-old bachelor who lives sandwiched between his domineering mother and dotty gramma. Still, he's a lingerie salseman who has a supposedly limitless access to mateworthy ladies at work. He can look at a customer and know her bra and panty sizes immediately, but the women who come to him aren't his type. Until he meets a 40-year-old secretary who may love him back but will forever be the enemy of his darling, dominating momma.
Director: Bela Segal
Stars: Kavin Dave, Kurush Deboo, Boman Irani |
Genre: Romance; Hindi-language, subtitled

LITTLE WHITE LIES
Marion Cotillard stars in this Big Chill-inspired story about a set of old friends grappling with the lives they've lived since their youth. Directed by her husband Guillame Canet, this saga begins when one friend has a near-fatal accident. Though this should send the pals to the hospital to offer comfort, they instead head to their annual beach resort holiday. Pour enough rose and the weasels will be sobbing in no time.
Director: Guillaume Canet
Writer: Guillaume Canet
Stars: François Cluzet, Marion Cotillard, Benoît Magimel
Genre: Dramedy; French-language, subtitled

HERMANO
Julio and Daniel may not be related by blood but they are bonded by sweat. Their primary means of communion is soccer (a.k.a futbol) and when word hits their hard-luck neighborhood that a recruiter will be stopping by, a violent event threatens the kids' big chance and their trust in each other.
Director: Marcel Rasquin
Writers: Rohan Jones, Marcel Rasquin
Stars: Fernando Moreno, Eliú Armas, Alí Rondon
Genre: Drama/Sport; Spanish-language, subtitled

KNIGHT KNIGHT
An indie British comedy that starts at the end of the honorable days of Camelot, when two hardly-aspiring knights are out of a job and into their cups. An untrustworthy king has just been asked to save a princess named Katrina—hey, a job!—but the "heroes" in shining armor steal the mark and make way with the money. Because, you know, that grog won't pay for itself.
Director: Christina Bucher
Writer: Nicholas Horwood
Stars: Tom Eykelhof, David Wayman, Nick Von Schlippe
Genre: Comedy

TEDDY BEAR
You'd think a film about a body builder and a Thai girl could make all sorts of comments on exploitation—I mean, "finding love in Thailand" is shorthand for some sordid business, and body building already asks men to perform mostly nude. But this doc about a massive, but cuddly Danish bodybuilder looking for love abroad has been adored by critics and fans, and won this year's Sundance director's award. Maybe it was took a lot of hard knocks to earn those muscles, but it looks like Dennis the muscle-man uses them sweetly.
Director: Mads Matthiesen
Writers: Mads Matthiesen, Martin Zandvliet
Stars: Kim Kold, David Winters, Elsebeth Steentoft
Genre: Drama; Danish- and Thai-languages, subtitled