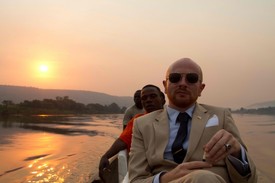 THE AMBASSADOR, our favorite flick of the week

While playing a teenager in a semi-religious family show, Jessica Biel got slapped on the wrist for appearing in Playboy. But now she's old enough to play a mother—a young widow, even—who loses her child and slips into an obsessive pursuit of a local urban legend. Seems kids in her small town have been abducted like clockwork, so perhaps "The Tall Man" could be to blame. But the monster may be a cover for an even more nefarious happening, perhaps someone with Playboy back issues under their mattress.
Director: Pascal Laugier
Writers: Pascal Laugier
Cast: Jessica Biel, Jodelle Ferland, William B. Davis
Genre: Horror

THE GOOD DOCTOR
Hot young doctors are always lonely: think of Natalie Portman in No Strings Attached, or everyone in Grey's Anatomy. Here, it's heartthrob and post-elf Orlando Bloom, who gets a twinkle in his eye (and a twinge elsewhere) when he sees sickly Riley Keough, aka Elvis' granddaughter. His gig is to heal people, right? But if he cures her, she goes home. And you thought hook-up culture was riddled with pitfalls.
Director: Lance Daly
Writer: John Enbom
Cast: Orlando Bloom, Riley Keough, Taraji P. Henson
Genre: Drama

FOR A GOOD TIME, CALL...
Katie and Lauren hated each other in college, but they hate living in terrible apartments more. When fate forces them to room together in a super-sweet pad, they launch a phone sex company to pay the rent and force themselves to get along. The battle between blondes and brunettes moves to the phone lines.
Director: Jamie Travis
Writers: Lauren Miller, Katie Anne Naylon
Cast: Lauren Miller, Ari Graynor, Justin Long, Seth Rogen, Mimi Rogers, Nia Vardalos, Mark Webber
Genre: Comedy

LITTLE BIRDS
Before Juno Temple starred in every indie and then randomly popped up in The Dark Knight Rises, she made this film about two teen girls from California's desert oddity, the Salton Sea. Loosely on the experience of its writer/director Elgin James, (who received money from Sundance Institute to produce this personal film) this long-delayed release is about the pride and perils of leaving home.
Director: Elgin James
Writer: Elgin James
Cast: Juno Temple, Kay Panabaker, Leslie Mann
Genre: Drama

DOGGIE B
A bichon frise is a connoisseur's dog, but here, for the first time, they're dancing queens. Finally, tapped potential! This indie film about a struggling dog-dancing studio (is there any other kind?) and the kindhearted vet who helps save it from closing is playing a lot of theaters. It's possible the "B" in Doggie B stands for "bank."
Director: Romanus Wolter
Writer: Romanus Wolter
Cast: Jesse Draper, Bettina Devin, Jane Wiedlin
Genre: Musical

THE AMBASSADOR **OUR FAVORITE FLICK OF THE WEEK**
Mads Brugger is the Danish Morgan Spurlock, but with even fewer scruples. In this practical joke/destructive diplomatic venture. Brugger goes to Africa to secure a post as an ambassador, but he's secretly interested in identifying just how quick to corrupt the supposedly democratic part of Africa is. A their primary export is "blood diamonds," I think you can figure just what kind of trouble Brugger (codename Cortzen) gets into.
Director: Mads Brugger

LIFE IS STRANGE
The Holocaust was a tragedy so massive it altered the identities of multiple nations for generations thereafter. Life is Strange asks the eerie question: "What if the Holocaust hadn't happened?" and perhaps hopes to uncover a perspective not defined by the heartbreak that marked the 20th century.
Director: Isaac Hertz

HOLLYWOOD TO DOLLYWOOD
The "Backwoods Barbie," Dolly Parton, must have approved this doc about two fledgling screenwriters riding their own Yellow Brick Road (technically I-40) to Dollywood with a script they want her to star in. Dolly added 15 original songs to this road trip odyssey, in which Gary and Larry Lane travel from Dolly's star on the Hollywood Walk of Fame, to Pigeon Forge, Tennessee so they can deliver this script to their hero.
Director: John Lavin

ORNETTE: MADE IN AMERICA
Rialto Pictures is reviving this 1985 doc about saxophonist/composer Ornette Coleman, known for writing the soundtrack to the most crucial underground art since the Beats. This musically saturated, visually innovative view of Ornette has the perfect director: avant-garde darling Shirley Clarke, whose pictures were widely traded bootlegs during her lifetime. Clearly, her magic jives with Ornette, or they wouldn't have made such wild music together.
Director: Shirley Clarke

ONE DAY ON EARTH
YouTube has made it possible for us to make public our most random and evocative moments—and has birthed a new genre of "found footage" docs like Kevin Macdonald's Life in a Day, or this one. This collective omnibus of clips is sourced from every country on the same day, leading to a collective view of this world all in one 24-hour-stretch.
Director: Kyle Ruddick

JOKER
A NASA agent takes his wife to find the mysterious Paglapur—a town that's reached legendary status in part because it was deliberately excluded from the maps during the India/Pakistan partition. Paglapur contains an insane asylum and little to no connection to the outside world, so when the scientist reaches it, he has to break it to them that Ghandi's not out there shaking it for their independence anymore.
Director: Shirish Kunder
Cast: Asrani, Avtar Gill, Gurpreet Guggi
Genre: Fantasy; Hindi-language, subtitled

THE FLYING SWORDS OF DRAGON GATE
In IMAX and 3D, this action epic from one of China's wuxia masters, Tsui Hark (Detective Dee), picks up at the Dragon Inn, when bandits have taken over the place to plot the looting of a fabled El Dorado. But between the Inn and the city of gold, there's a pregnant concubine, a ferocious swordswoman and the mysterious Zhao (Jet Li).
Director: Tsui Hark
Writer: Tsui Hark
Cast: Jet Li, Xun Zhou, Kun Chen
Genre: Action; Chinese-language, subtitled

BREATHING
Roman is 19 and he's spent most of his upbringing in juvenile detention. He could have been released earlier, but he's too anti-social behavior. Alone and orphaned, he takes a job cleaning a morgue, where he finds a corpse with his family name. Is it a clue he has family, or proof he exists solely as an experiment in suffering? This is the directorial debut of Austrian actor Karl Markovics, who most remember as the protagonist in 2007's Oscar nominee The Counterfeiters.
Director: Karl Markovics
Cast: Thomas Schubert
Genre: Drama

MUGAMOODI
This Indian super hero actioner also goes by the title Mask. From what we can see, it's about a guy intolerant of injustice, but highly tolerant of latex costumes, who hits the streets as a vigilante.
Director: Mysskin
Writer: Mysskin
Cast: Jiiva, Nithisree Baskar, Narain
Genre: Action; Tamil-language, subtitled

THE GRAND HEIST
An historical comedy about a gang of thieves out to steal ice blocks from the royal collection, this film takes place at the tail end of the Joseon Era, when people are sensing a change of guard. Just like bad guys on Fox TV's America's Dumbest Criminals, these bandits think they're onto something when they head out to snag those heavy, slippery icons of royal decadence...nothing lasts longer than ice, right?
Director: Kim Joo-ho
Cast: Cha Tae-hyun, Oh Ji-ho
Genre: Historical Comedy; Korean-language, subtitled