close
Streep versus Stallone: Who has the most career clout?

Hollywood's Oldest Hitmakers: Which 60+ Actors are Ruling the Movies—And Who Should Retire 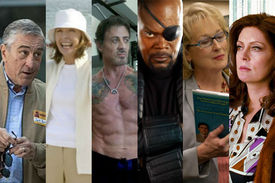 Movie fans will remember summer 2012 for its big franchise launchers and installments: The Avengers, The Dark Knight Rises, Prometheus, and Ted. (Sorry, Spider-Man—our senses were less than tingled.) But for industry insiders, this summer will go down in the accounting books for a new movie counter-programming trend: the rise of the olds. This week's The Expendables 2, starring sexagenarians Sylvester Stallone and Arnold Schwarzenegger, follows on the heels of The Best Exotic Marigold Hotel (with octogenarians Judi Dench and Maggie Smith), one of this summer's biggest surprise hits, as well as the AARP re-romances Hope Springs (Meryl Streep, Tommy Lee Jones) and Darling Companion (Diane Keaton, Kevin Kline).

Studios have traditionally ignored older moviegoers because, well, there aren't many of them—the majority of ticket-buyers and Coke-slurpers belong to the 40-and-under set. But as our population ages, a niche field is blooming, one full of 60-plus characters falling in love, kicking ass, and risking it all for one last jewel heist or glorious roll in the hay. And the kinds of characters and celebrities who've made this twilight transition years reveal a lot about how boomers see themselves—and who we all want to be once we're so grown up that our anatomy sags down. So which actors are poised to be our boomer idols, and who should start seriously thinking about retirement?

Meryl Streep
Age: 63
Best Decades: 1980s, 2000s
Prognosis: No one better represents this new trend of boomer renewal than Streep. Now in the fifth decade of her career, the overachieving actress's success (those 17 Oscar nods!) is validated by both her talent and likability. It's hard to argue that Streep has gotten better with age, since she's always been good, but in the decade since 2002's Adaptation, she has exuded a warmth and joie de vivre audiences have found irresistible. This has elevated her status in Hollywood from critical darling to improbable box office draw—and Streep's reliably good taste in projects tends to reward her fans. But what makes Meryl Streep Hollywood's biggest 60+ star is that she's who most of us want to be in past-middle age: smart, joyful, and at the top of our game.

Sylvester Stallone
Age: 66
Best Decades: 1970s-1980s
Prognosis: Like pro athletes, action heroes tend to have a relatively short career span. No one should know this better than Stallone, who reigned supreme as a Man of Testosterone in his youth, only to be replaced by Bruce Willis in the '90s and Jason Statham after him. But Stallone was good-natured enough to cast both Willis and Statham in his comeback vehicle, 2010's The Expendables, which found $274 million' worth of ticket sales from middle-aged dudes who wanted to recapture their glory days with Sly and the gang. With two more actioners on the way in 2013, the Italian Stallion refuses to be put to pasture, but it's unclear how many more box office dollars the actor can wring out of '80s nostalgia. It doesn't help that, with his Botoxed forehead, overly pruned eyebrows, and insistence on doing the same thing he's been doing since his twenties, Stallone seems like a guy who's progressed in years, but hasn't yet learned how to evolve.

Susan Sarandon
Age: 65
Best Decade: 1990s
Prognosis: Sarandon often feels like Meryl Streep: West Coast Edition. She's worked for more years and on many more projects than Streep with only a quarter of the recognition, but there's a "meh, why not" quality to her film choices—how many other Oscar winners can boast of having been in an Adam Sandler movie?—that somehow feels fresh and experimental, rather than greedy or rote. Older actress often complain about being cast as "the mom" once they hit forty, but Sarandon rarely does so—probably because she nabs the few "cool mom" roles Hollywood has to offer, as in The Banger Sisters, The Lovely Bones, and most recently, Jeff, Who Lives at Home. Sexy, loose, and unabashedly bohemian, Sarandon offers an enviable counter-model to those who worry that motherhood means baking apple pies and helicopter-parenting for the rest of your life.

Robert De Niro
Age: 68
Best Decades: 1970s-1980s
Prognosis: In the two decades that cemented them as film legends (roughly 1975-1995), Martin Scorsese and "Bobby" De Niro remade the movies in their image. When their partnership ended after 1995's Casino, however, De Niro put his career course on autopilot, apparently signing on the dotted line for pretty much any producer he ran into in an elevator. (I'm not sure how else to explain his participation in last year's New Year's Eve.) His busy schedule is proof-positive that Hollywood has loads of gruff old men and grizzled veteran cop roles for actors who want them—it's just not clear why De Niro wants them. De Niro seems to be a workaholic who wants to die at his desk, but his wish would be nobler if his work had more of a point.

Diane Keaton
Age: 66
Best Decade: 1970s
Prognosis: Thirty-five years after Annie Hall, Keaton seems the same as she's always been: flustered, shambling, shrieky. Though her signature look of glasses and tailored tuxedos look better than ever, the spriteliness that made a younger Keaton adorable has curdled over the years into an embarrassing lack of gravitas. Her most cringe-inducing moment came in a bizarre and uncomfortable interview on The Colbert Report back in April, but her recent roles in the creepy Something's Gotta Give and the weepy Darling Companion haven't afforded her any more respectability. Keaton hasn't become any less of an actor over the years, and in the right villainous role, as in 2010's Morning Glory, she's delightfully serious. Not every older actress (or person) has to have Helen Mirren's regal bearing, but sometimes there's a pretty thick line between levity and flippancy, and Keaton's refusal to see it makes her seem like the oldest kid on the playground.

Samuel L. Jackson
Age: 63
Best Decade: 1990s
Prognosis: Even as one of the very few nonwhite actors over 60 who work consistently, Jackson rarely gets the lead role. Actually, he seems content to make his mark in smaller roles in big movies, like The Avengers and the upcoming Django Unchained. When he does get the lead role, Jackson's choices—from Shaft to Snakes on a Plane to Black Snake Moan—reveal a deep love of exploitation flicks, both high- and low-brow. Despite his character actor status, Jackson has managed to routinely choose projects in line with his sensibility, and obviously has a lot of fun doing it. And he's the only actor on this list who can school us in what "cool" is—and show us that once you've got it, age can't take it away from you.