Tony Gilroy on Bourne Legacy's New Look: "I Like to Know Where I am in Action Sequences" 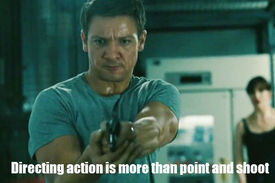 No doubt the first thing that came to your mind upon seeing advertisements for The Bourne Legacy is the question of why. Why bother making a Jason Bourne-Free Bourne film in the first place? Didn't the series already end on a well defined note?

The film itself doesn't satisfactorily answer that question. It occurs tangentially to the final Matt Damon Bourne film and adds a curious layer to the mythos—namely, that in this universe, the sole purpose of the American intelligence apparatus is to kill members of the American intelligence apparatus—but all that matters less that if the action scenes pop, which they do, and if the story stands enough on its own to keep you from feeling the weight of the previous entries in the series. Which it almost does.

Pulling that off was perhaps the biggest challenge for Tony Gilroy as he set out to essentially reboot the franchise he helped create a decade ago. Recently in Los Angeles, he sat with Jeremy Renner and articulated that difficulty with a bit more accidental candor than expected.

"They tried for a long time to figure out how to go forward after Ultimatum... I'm not sure I could have done that," Gilroy said. "But by the time everyone had left and the party was sort of over, and [they were asking] what do we do post-Bourne, the first conversation was really like a game. 'You know what you could do, you could say there was a much larger conspiracy, you could say that that was only a small piece of the whole thing.' That's a sexy idea, everybody really gets involved with that idea, and then it's 'God, you know what you could do, you could have Ultimatum playing in the background of the first 12 to 15 minutes of the movie, that'd be a phone call from the other movie to our movie.'"

That aspect of the film works, thanks to the return of series regulars like Scott Glenn, Joan Allen, and David Strathairn, all of whom appear just long enough to suggest even more potential, should any sequels get made. But the story hinges around Bourne 2: Electric Boogaloo, aka new spy Aaron Cross, played by Jeremy Renner. Renner does a serviceable job as someone who, unlike Damon's Jason Bourne, was happy to have been a part of the organization that now wants him dead. He imagined Cross as perhaps someone who signed up trying to good in the world. "It's a new palette of colors and a new canvas to paint upon," said Renner.

That metaphor kept popping up, notably when Gilroy spoke for a bit about The Bourne Legacy's action. The thing that really sets Legacy apart from the original trilogy is vast difference between Gilroy's grounded, mapped-out style of action and previous series director Paul Greengrass' inscrutably blurry handheld aesthetic. (For the record, I love it, but opinions vary.) "We had a much wider canvas," said Gilroy. "We had free reign in having a slightly different visual vocabulary for that part of the film. When you get to the action is has to have the maximum testosterone and energy it possibly can, there's a lot of ways to do that...I like to know where I am in action sequences, if I'm supposed to."

The Bourne Legacy is a perfectly serviceable thriller that could probably have thrived on its own without even being connected to the Bourne series. When talking about a relaunch that almost seems superfluous, that's the best anyone could hope for.