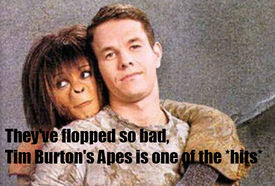 Hollywood keeps trying to reinvent the future, but are audiences buying it?

That's certainly a question every studio should be asking itself following the underwhelming opening of Sony's Total Recall this weekend. With its $25.6 million debut, poor critical reception, and a disappointing "C+" CinemaScore, there's little doubt that the big budget remake of Ahnold's 1990 blockbuster isn't heading for a successful theatrical run at the box office.

This begs the question: how successful is Hollywood's trend of remaking classic science-fiction flicks?  Let's find out.

In the last 15 years, 11 sci-fi flicks have aimed to be big budget blockbuster hopefuls. Two immediately stand out as hits: Steven Spielberg's Tom Cruise-led re-imagination of War of the Worlds, a hugely hyped summer 2005 release that made just short of $600 million around the globe. War of the Worlds stands as the single most profitable sci-fi remake on our list, having tripled its $195 million budget.

The other remake that raked it in is 2007's I Am Legend.  Driven largely on the star power of Will Smith alone, that film broke the December opening weekend record at the time of its release (once held by The Lord of the Rings: The Return of the King, although it was deflated by a Wednesday opening). Legend was not only a remake, but the third cinematic version of Richard Matheson's 1954 novel of the same name, yet it pulled $585 million worldwide on a $200 million combined budget—a near identical performance ratio as War of the Worlds.

Beyond those two films, however, success for the sci-fi remakes has been spotty at best. Case in point, the third most profitable film on the countdown may come as a surprise: Tim Burton's Planet of the Apes. Today, it's thought of as a flop, but in 2001, it opened to a massive $68.5 million, the second biggest opening of the year. But poor word of mouth caught on quickly, even though it still managed a $362 million global box office. Rumored sequels never came to light, the ultimate barometer of how studios really feel about their film's performance.

The mere fact that a widely-disliked movie finds itself as the third most profitable entry on our list is telling. Wonder how things look on the opposite end of the spectrum? Tied for being the third least profitable sci-fi remakes of the past 15 years are 2011's The Thing and the 2002 failed George Clooney vehicle Solaris. Respectively, those pics were made for $65 million and $70 million, but grossed a disappointing $28.1 million and $30 million worldwide.

Only a half-step worseis the Daniel Craig/Nicole Kidman horror The Invasion. Despite taking a summer release spot in 2007, the film and its two stars weren't able to generate any public interest in the film. It opened to a disastrous $6 million and managed only $40.2 million worldwide against its hefty $95 million price tag.

But none of those match the financial bomb of 2002's Rollerball. If the unlikely cast combination of Chris Klein, Jean Reno, LL Cool J, and Rebecca Romijn raised red flags, director John McTiernan's (of Die Hard, Predator and The Hunt for Red October fame) involvement legitimized the idea to redo the 1975 James Caan classic. Big mistake. MGM funded the remake for an unbelievable $100 million but upon its February 2002 release, the new Rollerball bagged only $9 million during its opening and had its legs chopped off by toxic word of mouth. Closing with $19 million domestically and a total of $25.9 million worldwide, that remake takes the gold for bottom-of-the-barrel sci-fi remakes thanks to its paltry 0.26 gross-to-budget ratio.

The somewhat good news for Sony is that the new Total Recall will fare better than that. The bad news is they still spent $175 million after production and marketing combined. With a projected domestic finish somewhere around $55 million and not a whole lot more from overseas territories, Recall is yet another certifiable sci-fi reboot bomb.

Take a look at the chart at the bottom of this column and you'll see that the sci-fi remake genre does have its fair share of modest successes. The upper-middle rankings have been lost to the annals of Hollywood mediocrity as forgotten duds that at least weren't financial failures. And then there's that last half of the list: six films, including 2012's Total Recall, that failed to turn a theatrical profit in any capacity.

This begs another question: how much longer can Hollywood keep revisiting the future by using blueprints from movies of the past? Sony has to be asking itself that as they watch the disappointing box office returns of Recall exactly one year before their next sci-fi remake, RoboCop, is slated for release.

Discuss this week's Number Crunch and vote for your least favorite sci-fi remake on our Forums.

Tags: Total Recall (2012), I am Legend, War of the Worlds, Planet of the Apes, The Invasion, Rollerball, Solaris
Print