close
"In movies, everybody bad has to be redeemed or die. But in real life, things don't happen like that." 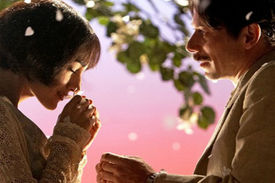 Marjane Satrapi was already a successful graphic novelist when she made Persepolis, a stylistically sparse animated feature based on her own books. That autobiography of her adolescence during Iran's turbulent '80s used cultural signposts like punk rock to bring a vibrancy to her troubled childhood, and was striking enough to score a nomination for Best Animated Film at the Oscars. Satrapi's newest, Chicken with Plums is a period piece about yearning for a love and a homeland long lost, and is awash in high pedigree Francophilia. Mathieu Almeric (The Diving Bell and the Butterfly, Quantum of Solace) plays a successful musician tied to a loving wife forced upon him by his mother, and children he considers strangers. After accidentally passing his first love, a woman literally named Iran who 20 years ago was forbidden to marry him, he loses his will to live and decides to starve himself to death. The film is seeped in a nostalgia and sadness unique to stories by expats, but for the rest of us, his struggle to recapture old feelings—and his awareness that they're unattainable—is as full-bodied as the food you remember from childhood. The chain-smoking and charming Satrapi met with us at the San Francisco International Film Festival to tell us why it's okay if you dislike your kids.

How much has Iranian cinema influenced you? That cinema has a unique way with self-awareness, as do you.

To tell you the truth, I've never seen myself as part of Iranian cinema. My subject is about Iran, but I work in French cinema and there are things that I like a lot about Iranian Cinema but other things are more inspiring: Hitchcock, Sirk. This is a film about a man who starves himself in his room and so I looked at all the films I could from the glorious studio days—films made in small spaces.

Your melancholy is very romantic.

I like the idea of melancholy so much! We living in a world with nice people and bad people—but if you see at a guy [in a movie] lighting a cigarette, you know in five minutes he's going to kill or rape someone. She wears black underwear: she's the bad girl. In movies, everybody bad has to be redeemed or die. But in real life, things don't happen like that. Americans make great movies like Chinatown and Deerhunter where in the end the bad guy goes on okay with no punishment. James Dean in Rebel Without a Cause—he spoke to his parents about what was wrong. That movie was made when we could criticize the notion of family. Now the family is completely holy and we don't speak on it. I love melancholy. If you don't have that moment—

And this character (played by Mathieu Almaric), he doesn't like his children in the beginning and he doesn't like them more at the end. This is a truth. If all parents really love their kids, someone should explain to me where all the miserable kids are coming from. This guy, sometimes you want to slap his face and other times you want to hold his hand. In the beginning, his wife seems miserable, but small-by-small you have compassion for her. I'm not in search of realism but the truth, and nothing is more interesting than the human spirit and the human spirit is like that. The human, no matter how rotten or egocentric he is, can die for love or sacrifice himself for the most beautiful idea. If we can only do good we never have to make an effort. That you are this nasty and can go and transcend yourself, that makes the human being more interesting.

You're using melodrama-black/white, good/evil-to open a door to a deeper thing.

In life, if we're really honest with ourselves, they say we are all equal somehow but if you're rich you suffer much less than if you have less. Yet if a rich person suffers a broken heart, "Poor rich!" Short, tall, whatever, the sadness is common. We tell ourselves these stories, say that we survived, we got better, but really what is there but love and death?

Music is a common interest in your works. Here, your protagonist is a musician and he learns music through hardship.

To be honest, I'm not sure you need to struggle that much. If you suffer as much as he does, you go to a mental hospital, but at the same time the day I'm very happy and I wake up and find myself very attractive in the mirror—which happens sometimes—and the sun is shining and everything is okay. Those days I don't go to my studio and work. I go out, I buy myself a skirt, and this is the way it is! You need a little bit of suffering to make you want to do something. The whole path of creation—why animals don't create but humans do—it answers the complexity of our soul. Our torments make us want to create. The torment takes us to work. If you feel good you don't create: you wake up and say "Hahahaha," and pick berries from the trees like Adam and Eve. Swim in the sea and eat fish.

I wanted to ask about the title—I half thought the film could have been named for a piece of music or for the lover.

Food is the only relationship our character has to the real world and it's the only way he relates to his wife. But his favorite dish also poses a dilemma: eating is choosing to live. This film has a lot to do with pleasure. I have the pleasure of smoking, of making love, but you can survive without that. You will be miserable, but you'll be alive. But when you stop eating, you'll die, and the day he loses his last pleasures is the end of it.

The lost love's name is Iran, which strikes me as a message of sorts.

The movie takes place in the '50s, when there was a big Coup d'état and the dream of democracy flew away from the region. The name of the character is Iran, but Iran is a name that exists, like being called France in France. So of course this is a lost love, a thing he loves so much and he can't touch it anymore and in the last scene, Iran doesn't recognize him. A friend of mine saw the film and said, "I hope the day you will go back to your Iran, she will recognize you." Of course this is something under—but I wanted to be elegant to put it under and if people will see it, they will see it, and if they don't, it will be a love story.

That's the hope of subtext—that it's felt before it's thought.

I have to ask about the cast. Almeric and Maria de Medeiros was perfect.

I knew everyone beforehand. Mathieu was my first choice, my second choice and my third choice. I called him and said "If you say 'No,' I'll be in shit because I don't have a second choice. I said "I do it with you or I don't do the film." He has these eyes, this depth in him. Maria is a friend of mine. It's very difficult because you never think of your friends first. All the people that were my first choice said "yes."

And it feels that way. Iran is just perfect.

They ask me, "Did you take an Iranian woman because she represents Iran?" No. You don't fall for your first love because of intellectual reasons; you see someone and suddenly you feel in love with her. I needed a girl you look at and fall in love with and she's perfect. She's a very intense and intelligent girl, and just innocent enough to want to reach out to.