close
"We actually had a code: no stripey socks, no curlicues, no blacks and whites." 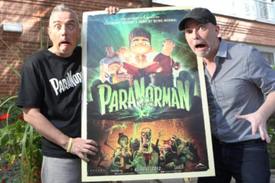 The upcoming animated film ParaNorman has been scaring critics—including our own—with its zombies, ghosts, and unforgettable deaths. From Laika Studios, the same indie animation team that produced the Academy Award-nominated Coraline, this new horror-comedy features a boy who can see dead people, but who's much more terrified of daily life. Boxoffice spoke with directors Chris Butler (who also wrote the screenplay) and Sam Fell about the importance of making scary movies for kids—and why they had a rule to make sure ParaNorman didn't feel like a Tim Burton film.

How long did the whole thing take?

Chris Butler: The production was two-and-a-half years. But the writing was 16, from the first seed of an idea.

What was that first seed?

Chris Butler: It was John Carpenter meets John Hughes, actually. Kind of a Scooby-Doo zombie movie for kids. What went through my mind was, "Wouldn't that be cool?"

Did you have a line you didn't want to cross for scariness?

Sam Fell: We tried to think about our audience. It's a family movie. We have a PG certificate. But we're finding, as many people as we talk to, we get a different opinion, really. Some 5-year-olds go see The Dark Knight. So every parent knows their own kid. It's down to you to decide, really.

Chris Butler: We're pretty responsible. Yes, we have scary moments, but we try to puncture a lot of the time with funny moments. And also, I think a big part of this story is, it's part of that old fairy tale tradition of presenting children with real challenges. Saying to them, yes, the monsters are real, but you can defeat them. And I think that's the important part of this movie. We're not setting out to just terrify, send them back scurrying.

Chris Butler: We didn't shy away from the scary stuff because we thought that was important. It's something that I think is sorely missing from a lot of family cinema today. It used to be there. But I think a lot of people play it safe. And I'm not just talking about scares, I'm talking about subject matter.

Sam Fell: Truly dramatic art. So it's memorable, really. You remember those films.

Chris Butler: Exactly. You remember all those early Disney movies because they scared you. But you also took something from them as well. I think if we weren't saying anything, we would just be irresponsible. But I think there's a lot of themes in this, there's a lot of things worth saying.

You didn't set out to make an anti-bullying movie—or did you?

Chris Butler: Yeah, that's part of the story. This kid, who doesn't fit in, who's picked on, what makes him weird makes him wonderful. By being this outsider—

Chris Butler: We didn't want to make it preachy.

So ParaNorman digs into the '70s horror movies, but not the classic Universal monster flicks?

Chris Butler: We wanted actually to avoid the Universal stuff because other people have done it. Tim Burton's very influenced by that stuff. And I think when you're approaching a big project like this, you've got to find your own voice for it. There's no point in aping Tim Burton because he already does what he does incredibly well, so we wanted to find a different way of doing spooky stuff. The '80 thing seems to fit perfectly. We're already got Gothic, we've seen that Victorian thing. We actually had a code in the design: no stripey socks, no curlicues, no blacks and whites.

Sam Fell: That was already there in the script, this vibe of an Amblin movie. There's a reference to Scooby-Doo in there, the gang in the van, and Chris was talking about John Carpenter and John Hughes movies, gluing those two things together. So from the get-go, we were in that period. It's a contemporary film, but we were referencing a lot of those films. You look back on those films, and you're like, the families aren't perfect in those films—E.T., Jaws, Spielberg movies. Families are troubled or all slightly dysfunctional. And the movies are often a bit darker as well. Darker in tone.

Is that why you chose to go with an unrealistic look, like giving Norman hexagonal eyes?

Chris Butler: Yeah, that's part of it. You get to explore avenues that wouldn't quite work in live action because of the stylization. Like, if this was made in live action, those zombies would just be horrible, terrifying things. You'd be entering into a grotesque thing rather than this stylized thing. But actually, the design style, it actually all came from a character designer who can't draw straight lines. Nothing is quite perfect in this world, there's no straight lines at all, and it kind of fit with the story. I love that even our attractive characters are kind of ugly.

All the women are narrow on top and huge around the hips.

Chris Butler: That was good for us because we wanted very much to tell it from an 11-year-old's point of view. And when you're 11, what you see is backsides and bellies.

Did you catch any blowback in the production from the studio about how scary or dark it gets?

Chris Butler: No. Travis Knight, who is our CEO and our lead animator, is a brave, brave individual. He wants Laika to have a voice that is different, he wants to do things that are more challenging. We're not interested in making pictures that are like Pixar movies or DreamWorks movies. They're already doing it. We want to do things that are a bit more brave.

Sam Fell: Coraline was a huge statement. It was already a game-changing film technically and in terms of story. It put the bar high already.

So what's next for you?

Sam Fell: [half-joking] I want to do a musical, a rom com.

Maybe you can do a rom com about how John Carpenter meets-cute with John Hughes.