close
"I smacked a couple of stuntmen here and there....I think they liked it."

Ready to Rumble: UFC's Randy Couture returns to The Expendables, the franchise that made him a movie star 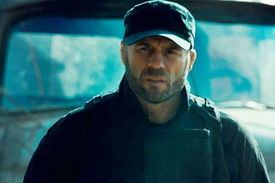 Here's what you might know about Randy Couture: he started wrestling in middle school, wrestled through his stint in the Army, kept wrestling through college, and wrestled long enough to become a U.S. Olympic team alternate three times in a row. At 34, he made his Ultimate Fighting Championship debut and over the next 14 years, he entered the ring for 30 televised fights, became a brand name, and even opened his own chain of gyms called Xtreme Couture. Here's what you might not know: Randy Couture is also a smart and sensitive guy who earned himself a degree in German Language and Literature and even speaks some French. That mix of brawn and brains is what got Sylvester Stallone to cast him as the empathetic Toll Road ("If you're going to get past me, you gotta pay") in the first Expendables and bring him back with honor for the sequel. Couture tells Boxoffice that even with all these alpha males on set, there wasn't a lot of brawling—but if there was, he'd like his chances.

Tell me about walking on the The Expendables set that very first day.

It was kind of surreal. Having all those guys come together, there was an electricity on the set. Definitely a "pinch me" moment for me. "Man, am I dreaming? Is this really happening?" I think Sly's one of the only guys who could have pulled that off, gotten those guys at that budget and made that first movie.

Were you all sizing each other up?

No, I think we were all just excited. There was no posturing. A lot of people assume if you get that many alpha males in the same space, they're going to be trying to one-up each other.

But if someone took the last bagel from craft services, how did you sort that out?

We'd end up wrestling over it. Nah, that never happened—but I'd like my chances if it did.

In a summer full of superheros fighting robots and monsters, having real guys fight other real guys feels refreshing.

Yeah, I think there's a gritty authenticity. It's a throwback to the original action films—it's more raw and real. No wire work, no crazy green screen stunts. We're ready for that. With muscle cars and all that stuff, people are into that again right now.

Everyone in The Expendables comes to the set with different skills. In the fight choreography, do they work with you to show off what each guy does best, or are you learning new moves all the time?

And for you, people want to see your up-close, real physical fights.

And that's fun for me. I don't stress about that! I had to do a monologue in the first movie, and I was way more stressed about making sure I had that down than I was about going in blind to a fight scene and figuring out how I was going to throw this guy or dump that guy—that stuff's kind of second nature.

In the UFC, every big moment came down to just you and how you were going to take care of yourself. Working on a movie with a bunch of guys seems like it would lighten the pressure.

Yeah. Just the trick was juggling all these guys and making sure everybody had their moment and got to do their thing. That wasn't a small task in the first one or the second one. But the challenge is very different than walking out in an individual combative sport and getting in a cage and fighting a dude. It's a different animal.

Did you feel more or less aware of the cameras shooting a movie versus fighting on TV?

I'm never aware of the cameras during a fight. My reality TV series The Ultimate Fighter really helped me a lot because you forget that the cameras are there, forget you're wearing a microphone. We shot 60 straight days, seven days a week, and after the first few days, you just forget about all of that stuff. That translates to feeling comfortable on set and not even thinking about that, but being able to focus on the character and the cues that I need to pay attention to. At the same time, shooting action stuff you have to be aware of where the camera is—it's a lot different really punching somebody in the face versus making it appear that you've punched them in the face for the camera. Definitely an adjustment for me. I smacked a couple of stuntmen here and there. Just the learning curve.

No—I think they liked it!

In some ways, Toll Road is the most emotional—and maybe even most sympathetic—member of the Expendables.

I've found he's kind of the glue. He'll emotionally defend all of the guys on the team. When some of the guys start cracking on another guy, he's the one that will stick up for people. At the same time, he's as flawed as the rest of them. I think it makes for an interesting dynamic.

Are there other UFC fighters you think could make the switch into acting?

Obviously, the movie didn't do very well, but I thought Quentin Jackson did great in The A-Team. He was tailor-made to play B.A. Baracus. He certainly has the ability. There's a guy I train with—Mike Pyle—who did Universal Soldier: Regeneration and did a very good job. There are a few guys out there who are interested and have a natural ability for it.

You were in the military yourself. How does that translate into playing a guy on a squad of mercenaries?

I was in the military for six years, from 1982 to 1988. It was a pretty formative time in my life, and I still carry around some of those characteristics that I developed through my time in the service. And certainly, playing a mercenary who's a military-oriented guy as Toll Road and begin part of a group like that, there's a certain camaraderie that those guys have. It's the same with fighting—it's an individual combative sport, but you have a team that you train with, a group of guys where you beat each other up on a daily basis. That forms a particular bond, and it's one of the things that's really cool about The Expendables: that locker room mentality and the way we know each other so well, we can push each other's buttons and make each other work harder. That's straight from my real life.

When you were all together shooting in Bulgaria, what did you do at the end of the night to relax?

Most of us, when things wrapped we'd either head straight to the gym to get our workout in for the day, or we'd go straight to bed and get up the next morning before call time and get your workout in there. We did celebrate Avi's birthday [Avi Lerner, the producer] one weekend where we went to an old house, which was an interesting setting. But that was really about it.

Wait—why do you still have to get a workout in when you've been fighting people on set all day?

It's just not the same. All the guys have a pretty strict regimen to be able to do the things they do and look the way they look. Fortunately, the Kempinksi Hotel had a great gym—a really, really nice gym.

I'm picturing a Bulgarian businessman coming in just to use the treadmill and then freaking out when he realizes who's surrounding him.

It's definitely a show-stopper when you see a guy like Terry Crews walk in and start throwing weights around.