close
Movies about comics are no laughing matter

Six Films About the Surprisingly Unfunny Lives of Stand-Up Comedians 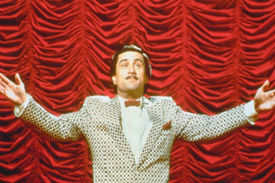 The new film Sleepwalk With Me, written, co-directed, and starring Mike Birbiglia, is that rare breed of films about stand-up comedians: one that's actually funny. Birbiglia mines laughter from the very serious worries plaguing his autobiographical character—anxieties about his stagnant career, his stalled relationship, and his increasingly perilous somnambulism. While television allows comedians to be funny, usually in the guise of wisecracking everymen (and very occasionally everywomen), the movies tend to be drawn to the pathos and pathology behind the jokes. (It's telling that only about half of cinema's comedian characters are actually played by comedians—the other half are embodied by dramatic actors.) So who are these overly serious movie comedians, and do they ever find their way out of self-loathing loserdom?

Rupert Pupkin in The King of Comedy — One of the biggest draws of stand-up comedy is that it looks deceptively easy. You don't need good looks or artistic talent to get up on stage at open mic night, just some bravery and a few sharp observations about life. Soon enough, it's an act here, an act there—next thing you know, you're in showbiz. It's perhaps that low bar to entry that makes stand-up comedy so appealing to losers with delusions of grandeur like Rupert Pupkin (Robert De Niro). In Rupert, De Niro and director Martin Scorsese created the worst wannabe comedian ever committed to film, a sociopath who thinks nothing of kidnapping his favorite comedian (Jerry Lewis) and ransoming him for an appearance on TV. When he finally appears on air in a garish, silver-and-burgundy suit, he tells jokes Milton Berle would have found passe. And yet he kills—proving that stand-up comedy really is where hacks and lackeys thrive.

Jerry Seinfeld in Comedian — On the opposite end of the talent spectrum is Jerry Seinfeld, arguably the most successful stand-up comedian in the world. Despite his mega-riches, though, the Seinfeld in this 2002 behind-the-scenes documentary is intensely dissatisfied, made restless and uneasy by his perfectionism and addiction to performance. Four years after his eponymous sitcom goes off the air, Seinfeld crafts a whole new act over the course of 12 months, analyzing his wording, timing, and gestures with surgical precision and relentless self-criticism. In a semi-tragic (though not at all comedic) way, the famous funnyman is made excited by how miserable he is. He's not just obsessed with the creative process and the audience approval, but also with the suffering he endures for his art. It's a portrait of the stand-up comedian as a pretentious blowhard.

George Simmons in Funny People — Judd Apatow's follow-up to Knocked Up is a surprisingly depressing look at stand-up comedy—and not just because the film starts with its main character, George (Adam Sandler), being diagnosed with terminal cancer. Instead, it's Apatow's insider-y take on the comedy scene in LA—in which you're either a nobody or a sell-out superstar—that's so dispiriting. At the bottom of the talent pool, a lot of wannabes focus their energy and creativity on constructing the perfect joke and hustling for performance opportunities. But the top of the food chain, occupied by dead-eyed stars like George, hardly seems worth the effort. George made his bajillions off the inexplicable box office success of Sandler-esque films like Astro-Not, about a NASA janitor who accidentally gets launched into space, and Dog's Best Friend, a detective story about a veteran cop partnering up with a police dog. Predictably, the stand-up stage is seen as the real arbiter of talent—and it's a telling character moment when George pays someone to write jokes for him when he bombs his show. But who wants success when fame and fortune comes in the form of My Best Friend Is a Robot?

Lenny Bruce in Lenny — By far the worst kind of films about stand-up comedians are those that portray them as truth-telling prophets. Dustin Hoffman stars as the revolutionary comedian Lenny Bruce in this self-serious biopic, which explores Bruce's career through its unpromising beginnings, its brilliant middle, and its long, drug-fueled decline. It makes a bohemian martyr of the comedian by looking at his work solely through his premature death, making him out to be a fatal victim of the uptight, prosecution-happy '50s. Though there's a racy joke here and a four-letter word there, the film is about as solemn—and just as hero-worshipping—as The Passion of the Christ, thus missing out on the core truth that audiences are only willing to put up with self-righteous, loud-mouthed boors if they're also funny.

Dottie Ingels in This Is My Life — For many decades, female stand-up comedians from Phyllis Diller (RIP) to Joan Rivers to Roseanne Barr found the stand-up stage a thrilling antidote to the housewife life. In her directing debut, Nora Ephron (also RIP) created a complicated ode to stand-up comedy as female empowerment through Dottie Ingels (Julie Kavner, Marge on The Simpsons), a single mother so obsessed with making people laugh she makes the make-up counter where she works as a saleswoman into an improvised stage. But when she finds a modicum of success, her teenage daughters are less than supportive; they'd just like their mother back. They have a point, though, and it's the late nights and the punishing traveling schedule that remind us that there's a reason so many thirtysomething stand-up comedians sign on to sitcom work.

Joan Rivers in Joan Rivers: A Piece of Work — But when you work in comedy for years and the movie and sitcom offers never roll in, what you get is A Piece of Work, a year in the life of a 76-year-old working comedian. True, Rivers had a successful daytime talk show, but she never had a chance at Johnny Carson's seat, no matter how many times she performed on his show. Despite her pioneering status and relative financial security, Rivers' age and gender make her an underdog, which makes her unfulfilled ambition and tireless hustle for gigs admirable. Despite her current status as a punchline, the absolute ferocity of her jokes and her work ethic have allowed her to claw her way with those long, lacquered nails, out of loserdom. As Rivers might say with her signature cackle, "That's how it's done, son."