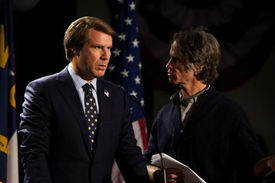 Jay Roach came to fame directing the Austin Powers and Meet the Fockers franchises, but he's never hidden his political streak. In between pratfalls, he's directed two TV dramedies based on real life political events—Recount starring Kevin Spacey and Game Change, which cast Julianne Moore as Sarah Palin—plus he even also produced the 2004 Showtime series American Candidate, a reality show which aimed to find the true voice of the people. Naturally, when Will Ferrell and Zach Galifianakis decided they wanted to make a comedy about two Southern politicians who engage in a campaign of mutually assured destruction, they decided to take Roach out for lunch. "They had no script, they had only a little idea about the concept," says Roach, "but I was like, 'I'm in—let's do it!" He's a comedy director with guts. But here's the real question: will he get nervous if Barack Obama and Mitt Romney see The Campaign before their own big election? We ask.

Do you think people take politics too seriously?

I don't know if you can take politics too seriously. If anything, I don't think they're taken seriously enough. It seems like it's becoming increasingly circus-like, which then creates an opportunity for comedians because the only therapy for watching your political system devolve into cage match ethics is to find a way to laugh at it. That helps you through the anxious feeling that this isn't exactly how things are supposed to go. I wish people thought more about politics—I wish there were other ways to get people to think about it than just doing comedy stuff—but I'm happy to be part of the comedy if that's what works.

I do think there is a general feeling that we all want things to go better in our political system—we're all idealistic—and I do think most people are essentially patriotic. I think what happens is you see people go, "Hey, maybe this guy is the guy!" No, he's not it. "Oh—maybe this guy is the guy!" No, he's not it. People want to get behind a personality, and that's partly what this movie—and Game Change, too—are about. All those ideals and your need to want to root for somebody, but also the short attention span we all have these days. I hope people sort of recognize that genuine comment on our actual situation.

They say that truth is stranger than fiction. When it comes to politics, would you agree?

I spend way too much time on the internet reading about politics. I envy Jon Stewart: can you imagine having 20 or 50 people combing the news every day looking for the most relevant—and yet, also the most hilarious—stories. That must be the greatest job ever. We were shooting The Campaign right at the time of the GOP primary season during all of the debates. Watching one candidate rise and then either have a gaffe or a scandal or snafu, we would come to the set every day and say, "Oh my god—can you believe what happened last night? Is there some way to work this in?" If someone's affair was discovered, they might go up in the polls. Or if someone got a C in college, somehow that was turned into a good thing. They could turn a bad thing into a good thing: "Well, we're all average. C's are for average people and I'm no snob." The logic of that just cracked me up, so we were always trying to fold that stuff into the script on the fly.

Do you think Barack Obama and Mitt Romney should see The Campaign, given that it comes out three months before the election? They'll have a lot on their mind, but it might not be the right distraction.

I do hope they see it because part of the film is about how politics has changed by having to spend so much money and having to go negative so early. There is some humor at the expense of negative campaigning, especially. The movie's about two guys getting way too much money to go way too negative way too early. There might be a cautionary tale in there somewhere.

Besides Will Ferrell and Zach Galifianakis, of course, who are your other favorite comedians who play politicians?

They're all so well represented on Saturday Night Live. Fred Armisen is so brilliant as Obama, and Andy Samberg playing Rick Santorum always cracks me up. We were working with Jason Sudeikis who was playing Mitt Romney on SNL while we were shooting and we were like, "Well, I guess we have to root for Romney or you'll have a lot less material that gets on air." It would be an interesting Monty Python troupe if you could cast all of them in an ensemble comedy show. I'm mainly talking about GOP candidates just because we were in the middle of their primary season, but we've had some great people to make fun of on the left, like with John Edwards. It's been an interesting political time.

To get the look of politics right, you had to make Will and Zach look like politicians. I'm betting that started with their hair.

Hair is everything. And it's a big part of our film. You can't really run for president without great hair. You either win the hair contest or you start over. Will Ferrell's character, Cam Brady, his hair is his superpower. It's his secret weapon—he's like Samson, practically. He's constantly messing with it and checking it in a little mirror. For every single thing, he asks, "How's my hair?" Jason Sudeikis' job is confirming that, yet again, his hair is strong. Even Zach's hair undergoes a major transformation partway through the story as part of his whole makeover. There are some great hair models: John Edwards, Rick Perry. And then there's how much you have to spend on hair. Wasn't that John Edwards' thing, that he got $400 haircuts? Candidates need Super PAC money just for hair alone.

How would you style your own hair if you ran for office?

It's a problem for me because I've always had long hair. The founding fathers had long hair, but they also wore wigs. I don't know when shorter, perfectly cut hair became the style, but I would have had to run in an earlier age.

I certainly hope so. I really do believe in leadership, and there are some leaders now who are looking for the best way to do things. For me, it's about cleaning up the campaign system as much as possible, trying to take the money out of it, which has become the way elections are run. Our country has a very uneven record in how it handles elections. In most countries, you vote on your day off or they give you a holiday to vote. We make people try to vote on their work day. Little things like that turn out to be big things because people need to feel like they're part of a legitimate process as opposed to constantly feeling like it's being de-legitimized all the time. I hope there's a trend toward questioning these absurdities to the extent that people just give them up. And I hope that comedy can be part of it.