The Master of Mayhem Returns: David Cronenberg on his polarizing new film, 'Cosmopolis' 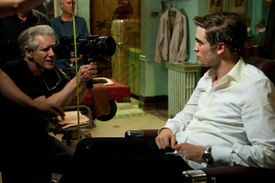 Cronenberg and Pattinson on the set

Age has not weakened David Cronenberg. The love him-or-hate him director of such cult hits as The Fly, Videodrome, A History of Violence and Eastern Promises turned 69 in March, but you wouldn't know that by watching his latest effort. Cosmopolis overflows with the kind of big ideas and stylistic flourishes that young directors trot out when they are looking to create buzz. For Cronenberg, it's just business as usual.

Set mostly inside a white stretch limo, Cosmopolis marks a day in the life of investment billionaire Eric Packer (played by Twilight's Robert Pattison in anti-Edward mode) as he slowly travels across a New York City backed up by protests, funerals and a presidential motorcade—all to get a haircut. On his journey, Packer meets with the varied people in his life: his art dealer/lover (Juliette Binoche), his frigid wife (Sarah Gadon), his business advisers (Jay Baruchel and Samantha Morton) and a bitter ex-employee who is out to take his life (Paul Giamatti). If Cosmopolis sounds like nothing you've ever seen before, that's because it is. Cronenberg adapted the film himself from a novel by Don DeLillo—the first time he's written a feature-length screenplay since 1999's eXistenZ—and every frame bears his distinctive mark. The film's premiere at Cannes polarized critics, and Cosmopolis is bound to polarize American audiences as well when it opens on August 17. Boxoffice caught up with Cronenberg to discuss his fascinating new work.

It's been a while since you wrote a script. Did it take you a while to get back into the rhythm?

I wasn't planning on writing a screenplay at first. Paulo Branco, the producer of Cosmopolis, proposed the project to me. I said, "I love the novel, but I have to take a look at it to see if it can really be a movie." So I spent three days transcribing the dialogue and putting it into screenplay form. I just wanted to see if the dialogue—which I thought was fantastic—would work in a script. The next thing I knew, I had a screenplay.

Speaking of adaptations, how does it make you feel when someone like Bret Easton Ellis says that you'd be perfect to direct an adaptation of the housewife erotica Fifty Shades of Grey? I don't know if you heard all the fuss about that.

Yes, I did. You know, I haven't seen Bret for many years, but honestly it's flattering if anybody thinks I would be good to direct anything. Not that I would want to do that project, but the fact that Bret was thinking of me after all these years pleases me on a personal level. We met at a certain point and I was going to do American Psycho and he was writing the script and it didn't work out. I haven't been in touch with him since then. The way I react is, "Oh, Bret is still thinking about me. That's really nice!"

Did Robert Pattinson ever surprise you on set? He's obviously still evolving as an actor.

Every day. We both knew that part of this exercise was that he was going to be put in a position to do things he's never done before. I never really knew exactly what would happen. I didn't have him rehearse the whole movie for me—in fact, that wouldn't work anyway unless you had the real actress there. For instance, he could be reading a scene with me that he would eventually play with Juliette Binoche and I'm not going to get the same performance. It's normally not my practice to rehearse, anyway. Each day he was wonderfully surprising in the best possible way.

When a movie like Cosmopolis polarizes audiences, you seem like the kind of director who would revel in that. If people are arguing, do you feel like you've done your job?

Well, I'm not looking for that, honestly. I just read a review online that said the movie was one of the most exciting film events of the century. I like that. I wouldn't mind if everyone thought that. On the other hand, the movie is very uncompromising and unconventional so it would be very hard for any audience to anticipate what they are in for, so therefore you know that you're going to get varied reactions. Yes, people have walked out on this—and they've walked out on other movies I've made, as well. At this point, I'm not afraid of controversy, either. It's not something I'm working for, but it's not something I'm surprised by.

It surprises me that you said you read a review. A lot of directors claim to not read reviews. Of course, they could be lying.

People send me reviews that are very good. Usually friends don't send you bad reviews, let's put it that way. Honestly, there are some people who actually like to read bad reviews and get upset, or to know who their enemies are. I'm happy to read an intelligent, good review, but I don't particularly want to read bad reviews that will get me incensed. I read the first reviews that come out, because you made the movie for audiences and the first real articulate response that you get as a filmmaker is from the first reviews you see. That's just the way it is. Of course you're curious. After a while, I've found I'm only interested in articulate reviews, and they don't have to be good, because you can have good reviews that are stupid.

You are known for having a passionate fanbase that obsesses over your movies and watches them repeatedly. Do you ever re-watch your own work?

No. There comes a point when you have a great screening where you really feel the audience really got it and you can feel the electricity. When that happens I say, "Okay, that's my screening." If I'm flicking through television and I stumble upon one of my old movies, I immediately get away from it. I really can't see my movies as just movies. They are sort of documentaries of what I did that year. It's like watching videos of your Bar Mitzvah.

Your approach to violence has always been very effective to me. It's realistic and it's brutal. Do you think this trend of comic book stylized violence desensitizes the viewer and weakens the impact?

You can justify that aesthetic approach, and I'm not talking from a sociological or psychological standpoint. Take slow motion in The Wild Bunch. [Director] Sam Peckinpah used it a lot, and it worked in the context of that movie. I don't have a rule when it comes to that. I wouldn't say that I wouldn't ever use stylized violence if the tone of the movie demanded it. I really let the movie tell me what it wants, and each movie wants and needs different things. My tendency is to want to feel the reality of it, and the same thing goes for sex. That's my normal approach, but I can't say I wouldn't do it a different way.