The Six Accidentally Scariest Kids Movies of All Time 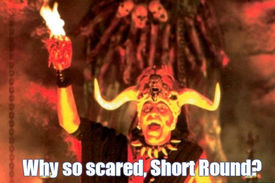 Even the sweetest kid flicks mix in a little scary with the sugarplums (literally, in Fantasia). But ParaNorman's unabashed use of ghosts and suicides makes it one of the few kids' movies that's not just dark-it brazenly insists that children love being morbid. Has Hollywood with its endlessly perky family flicks like Ice Age 4 gotten its audience all wrong? Yes. But at least ParaNorman is upfront about wanted to freak out their preteens. Here's six films that already—and accidentally—proved kids are psyched to be spooked.

1. The Secret Garden
In this disturbed and classic tale, a girl's whole family drops dead of cholera, a tragedy that leaves her more crabby than sad. She moves to a English estate as cheerful as a Brontë novel, where she meets her crippled cousin who is kept locked up so he won't annoy everyone while he dies. His father doesn't mind, since he spends much of his time talking to his dead wife. Broadway turned this misery into a musical—hey, in Oliver! it managed to make larceny and domestic abuse perky—but the movie is as tuneless and upsetting as author Frances Hodgson Burnett intended. Besides, music wouldn't have helped—when the chorus is made of ghosts, you know you're in trouble.

2. Matilda
Film directors are allowed to be gloomy. Children's book authors, however, are generally sunny. Except for Ronald Dahl, who wrote about misused, underprivileged children and the adults who terrorized them. Matilda is a more than just a Cinderella story. Sure, Cinderella was a sweetheart who was harassed by her step-family. But Matilda gets it worse: this prodigy is abused in almost every way by both her parents and her teachers. And when she uses her telekinetic powers to fight back, even the adults in the theater get scared seeing the glee in their kids' faces.

3. Indiana Jones and the Temple of Doom
A generation of grade-schoolers who happily tagged along to Indiana Jones' sequel to Raiders of the Lost Ark were scarred for life by child slavery, boiling lava, monkey brains, and open hand heart surgery. Adults couldn't cover their kids' eyes fast enough. Wrote People Magazine's outraged critic, "There are no heroes connected with the film, only two villains; their names are Steven Spielberg and George Lucas."

4. Who Framed Roger Rabbit?
This wasn't a kids' movie, you say? Au contraire: it was rated PG, so parents happily brought along their unsuspecting babes who just wanted to see their favorite cartoons in real life. Oh, and then those cartoons got dipped in sizzling, screaming acid. What's worse than the death of a sad cartoon shoe? Try having a guy fully squished by a steamroller—and not dying. Besides, Jessica Rabbit's curves deserved a PG-13 rating all on their own.

5. Old Timey Disney Shorts
In a magical time before self-imposed censorship and non-exclusively child-oriented cartoons, Disney cranked out a whole bunch of shorts that are downright creepy. You may have already seen their Skeleton Dance short, but their Haunted House and Egyptian Melodies are equally capable of scaring those young enough to think Mickey Mouse really exists. (For another tenuously child-oriented animation, check out Jan Svankmajer's trippy version of Alice in Wonderland, simply titled Alice—that's about the only simple thing in the film.)

6. Forbidden Games
For all the film snobs out there, this is a 1950's French flick in which kids go around burying dead bodies of animals...as a game. Enough said.