'Total Recall' of the Mars: Why have movies stopped wanting to go to space? 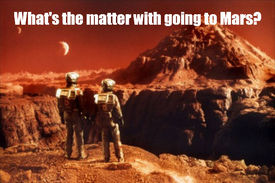 No doubt Total Recall will be a modest hit for Colin Farrell, though it won't be as beloved as the Paul Verhoeven/Arnold Schwarzenegger original, the apotheosis of glorious, antisocial violence in '80s cinema. But whether or not the film is good—see our review—its look is at least staking out some original ground. But in doing so, is it revealing an uncomfortable truth about how our feelings about space have changed over the last two decades?

The original Total Recall is a perfect photograph of its era. It was released during a very interesting time: months after the fall of the Berlin Wall and just over a year before the Soviet Union disbanded and the Cold War officially came to an end. The U.S. was mired in a deep recession, and the jingoism of the '80s was giving way to a deep uncertainty. The film was a masterpiece of ultraviolent camp, full of visceral body horror, graphic and unrestrained gun violence, copious use of human shields and of course, tripled breasted mutant prostitutes. And despite all of this, it also had an undisguised idealism about the future.

Not just in the tale of rag tag rebels triumphing over evil corporate dicks (assuming you don't agree with Verhoeven that the events of the film were nothing but Rekall-induced fake memory), but because the bulk of the movie takes place on—or obsesses around—the planet Mars.

Okay, sure, Verhoeven's take on Martian colonization isn't actual science. Well, except for the three breasted hooker—obviously in the future everyone will have at least three breasts. And a Martian setting itself is a trivial plot point. The red planet isn't required for Total Recall to make sense any more than the the presence of a super muscular Austrian is required for the action scenes to kick ass. But Total Recall's Mars—however unrealistic and triple-boobed—was emblematic of the way we used to think about the future.

Once upon a time, it was a given that someday human beings were going to spread out into the universe. It might take forevs to do so, but it was inevitable, and when it happened, our first stop was going to be our sometime nearest planetary neighbor. Since the earliest science fiction, Mars has been the favorite dream vacation for Earthlings, and the use of Mars as a realistic destination in the original Total Recall tapped into that heritage. The audience accepted a Martian colony as easy shorthand for the future, the same way a black president used to be.

Since then, science fiction films have grown increasingly inward. Audiences have responded to tales of alien invasions, to mindbending depictions of reality manipulation, to demonstrations of fantastic future technology. But not to the idea that science and exploration are good. Hollywood's approach to the universe has become, "Get off my lawn,"—if aliens don't bother us, we won't go bother them. And ever since, every Mars-related film has flopped.

What's interesting of course is that Total Recall 2012 prominently features what was, once upon a time, the gold standard of things we want in the future: flying cars. But even this fantastical tech seems aesthetic rather than science fiction-y. The cars don't symbolize something we actually expect to achieve—would any of us trust the skies to our fellow drivers, especially after midnight on Friday? Instead they function like Lightsabers in the Star Wars trilogy, signifying that the film takes place in a sci fi fantasy universe because, hey, look at this cool stuff.

Maybe the problem is that Mars kind of sucks as a location. Monochrome settings do get a little boring. Maybe the problem is a studio system that looks at Mars-themed flops and doesn't think "Stop making bad movies," it thinks "Stop making Mars movies." Maybe the problem is that we finally are living in the future, and there's no need for space travel when you can store your entire music collection on your phone. Hell, perhaps it's that popular culture has finally caught on to the idea that Mars isn't really terraformable, that space travel is a lot of expense with little payoff, and that we can't seem to figure out a decent fuel source. But maybe, in the midst of global warming, shrinking fuel supplies, and a horrid recession, it's easier to imagine staying home because we can't afford to travel—and we no longer trust anyone besides ourselves, even those brainiac scientists.

Hopefully, we'll keep dreaming of a future more ambitious than touchscreen window glass. If not for national glory, if not for science, than simply for the most important thing of all: the fate of our triple-breasted great grandchildren.