close
All eyez on Hollywood's most notable final film roles 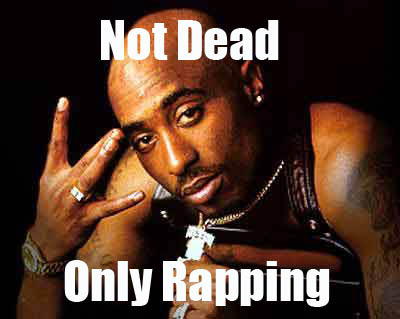 Whitney Houston's final film, Sparkle, presents the audience with a depressing dilemma. See, the death of a talented artist—whether in or well past their prime—feels like a giant hole has been ripped in the fabric of time and space and pop culture. They're gone. Forever. And not will we never get another product from them, we're forced to consider our own mortality.

But what if they weren't finished creating? What if they were working on a new album, finishing a new TV special, making a film when they died? Do we quietly table their work until enough time has passed that it doesn't feel creepy? Hell no: we release it as soon as possible. But for every brilliant final performance, there's at least five that feel shamefully exploitative or at least just ill-advised.

Enter the world's foremost expert on posthumous success, the late, great Tupac Shakur. Despite dying from multiple gunshot wounds in the fall of 1996, in death Pac has been one of the most prolific recording artists of all time. While alive, he released four albums of new material. Since dying, he's released six. No wonder he's the subject of the most elaborate faked-death theory since Jim Morrison bought it in a Paris bath tub. Turning to The Don Killuminati himself, we've taken a look at some of the most notable posthumous performances to hear what Tupac himself has to say about their loss.

Bruce Lee in Enter The Dragon

Considering this film's huge impact, it's astounding to remember that it came out after Bruce Lee died. Unfortunately, true fame eluded Lee for most of his career. After years carving out a living playing second fiddles in Hollywood (and having his idea for a TV show about a Shaoulin monk wandering the American west stolen), he returned to Hong Kong where in the space of just under two years, he directed action scenes in several films and starred in a string of martial arts classics, culminating in Enter The Dragon.

Alas, Lee died from an allergic reaction a week before the Dragon's Hong Kong premiere, but that movie changed the film world forever. It instantly legitimized the Hong Kong film industry, made martial arts movies cool, and turned Bruce Lee into an international superstar. No wonder that absolutely crazy conspiracy theories about his death emerged in the years after. Some suggested his family was the victim of a curse (see #3 for more). One theory suggests he was murdered by Triad hit men. In 1985, a martial arts magazine claimed his death was due to lingering effects of a dim mak strike dealt to him weeks earlier. And yes, some even suggested he faked his own death. But even if Bruce didn't fake his death, his performance in Enter The Dragon is so incredible we'd believe he did it just to keep from ever having to top it.

Tupac sayz: "Ain't no escape from a deadly fate."
.
Orson Welles in Transformers: The Movie

Years before Michael Bay got his hands on the franchise, this anime-style cartoon used the first-ever swear word in series history ("Dammit!"), and introduced the infamous schlock metal song "The Touch" into popular culture. Still, to class-up the joint, it hired the director of Citizen Kane and Touch of Evil to voice the film's primary villain, a giant, planet sized robot called Unicron who eats planets and intones darkly about his plans to, you know, eat more planets.

About his role, Welles said "It's about toys who do horrible things to each other," and he was right. Half the cast of toys was killed off—including Optimus Prime—to make way for a whole new line of toys. Unfortunately, Welles was killed off, too. He died about a year before the film's theatrical release. Sadly for popular culture, Orson's death hasn't been dogged by conspiracy theories (he was 70), but his performance in Transformers: The Movie is actually kind of awesome, weird proof the man still had chops and strange energy to spare.

Tupac sayz: He went from nuttin to lots, ten carots to rock/Went from a nobody n***a to the big man on the block."

Brandon Lee in The Crow
Remember the curse we mentioned earlier? The reason people still talk about it is Brandon Lee. The son of Bruce, Brandon was only 8 when his dad died, but he followed in his father's footsteps, first by becoming a skilled martial artist and then by becoming an actor. His career was a largely unremarkable string of corny TV gigs. However, in 1991 at the age of 26, he scored a multi-film deal in 1991, and was cast as the lead in the adaptation of the comic book The Crow.

Lee was shot and killed during filming when a gun filled with blanks accidentally had a fraction of a real bullet inside the barrel. Which only made the film creepier as it was about a man brought back life to avenge his own murder. When the film was released a year later, it helped make Goth culture mainstream and cemented Lee's status as a burgeoning star cut down just as he was coming into his own. This gave rise to renewed talk of a supposed curse on the Lee family, a prime conspiracy theory worthy of Pac's legacy. It's just too bad The Crow wasn't a better film.

Tupac sayz: "The beginning is an ending, am I just a slave? So I got to be brave from the cradle to the grave."

Heath Ledger in The Dark Knight
As if this needs explanation. Heath Ledger's performance as Batman's greatest foe was so compelling, it even has the unique distinction of being the only time someone has won an Academy Award for acting in a comic book movie.

When Heath died of accidental prescription pill overdose, his death cast such a large shadow on the Dark Knight series that even though the Joker isn't mentioned in The Dark Knight Rises, you can think of little else. Sorry Christian Bale, but in 40 years, Ledger's performance will be the only thing anyone remembers about Nolan's trilogy—kind of like Tupac's relationship to Death Row Records.

Tupac sayz: "Even though I had pain in my heart, I was hopeless from the start/They couldn't tell me nothin, they all tried to help to help me."