close
If a bike messenger can be a hero, why not a dental hygienist? 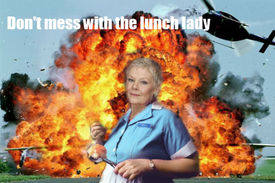 Premium Rush is a thriller that stars Joseph Gordon-Levitt as a NYC bike messenger who zooms around town trying to keep a dirty cop from acquiring a vital package. If this sounds a little strange to you, well, it is. Since when is a bike messenger an action hero? What's next, a typist? Maybe. We've given five more wimpy careers a full-throttle thriller makeover.

The Job: Cafeteria Worker
The Film: Revenge of the Lunch Lady
Cookie Stephens (Dame Judi Dench) has spent a lifetime serving tater tots and Hamburger Helper to the brats at Public School 264, and she has had just about enough. Capitalizing on her friendship with the weak and gullible local pharmacist, she concocts a plan to plant drugs in the lunches of every school in the state, so that the kids be busted for possession and she will be finally be free of the insufferable munchkins. Her daring plan is compromised when her coworker, the goody-two-shoes Sandra Deed (Cate Blanchett) finds out and tries to intervene. After an extremely messy fight in the kitchen—a giant set piece involving cream pies and boiling stew—Deed escapes in the milk truck and drives frantically to the police, where she spills her tale before collapsing from blood loss from a spork wound. Dench is locked away, but in a post-credits easter egg, is seen slowly burning a hole in the bars of her cell using Mountain Dew.

The Job: Pedologist
The Film: Under the Surface
Soil expert Lars Tveit (Daniel Craig) has won a MacArthur Genius Grant to study the effects of a new breed of engineered fertilizer on the isolated, bleak farmland of Saskatchewan. But to his horror, Tveit discovers that although the fertilizer lives up to its claim of helping the crops grow three times faster than normal, it is depleting the nutrients in the soil so quickly that, if left unchecked, the land will be barren by the end of the summer. With the help of the clever but difficult farmer Johanna McKay (Rooney Mara), Tveit battles the devious chemical formulation of the compound, while fending off attacks from the armed and dangerous representative of the fertilizer's manufacturer (Matthew McConaughey) and the incensed local organic farmers.

The Job: Dental Hygienist
The Film: I Spit on Your Schemes
Pam Billixby (Amy Adams) has been putting smiles on her patients' faces for over 15 years. But as she cleans the teeth of a mysterious foreign businessman (Mikhail Baryshnikov), she sees a strange insignia carved into the side of his incisor. Bewildered, she asks what it means and he storms out of the office. The plucky dental hygienist begins tailing him around the city on her Vespa and tracks him to a covert meeting in the back of the local McDonalds where she discovers that he is part of a master plan to kidnap all the city's dentists in the city and force people pay inordinate fees to fix their pearly whites. Billixby engineers their defeat thanks to a strategically placed floss trip-line and a flood of fluoride, but then is upended when the tough cop (Matt Damon) who has been warily monitoring her efforts points out that there actually is little difference between their nefarious scheme and the health care system as it stands. Billixby brushes away this information, and they drive into the sunset on her scooter.

The Job: Tree Farmer
The Film: All that Vermont Allows
Hud Rockson (Chris Evans) has spent years patiently cultivating his flock of evergreens in a remote Vermont mountain valley until a greedy developer (Paul Giamatti) starts buying all the green space from the impoverished locals so that he can build a sprawling big-box store, Mall-Wart. Angry and desperate, Rockson teams up with a zen garden expert (Harold and Kumar's John Cho) and a botanist (Paul Dano) to weed out the concrete roots of capitalism. In a series of daring midnight raids, Rockson—a man who's able to take out a guard with the blunt end of an axe—and his gang fill the build site with fully grown trees, gigantic boulders, and poisonous, carnivorous plants until the company is left with no choice but to declare it economically infeasible. They celebrate with some friendly boxing, after which the gardener ends up with a nosebleed and the botanist is knocked out cold.

The Job: Furniture Designer
The Film: Strip it Down
Mary (Hilary Swank) and Joe (Colin Farrell) have been partners in furniture design and romance for ten years. But after Joe attends a conference on Building Better Ottomans, he acts paranoid and distracted, even storming out of the room to avoid discussing the vital differences between European and American upholstery. Then one day, he disappears entirely. Unsure if Joe is alive or dead, Swank embarks on a daring journey to find her beau, beating up cowhands and well-dressed tailors alike to get her information. It turns out that a powerful leather goods dealer (Chuck Norris) has taken out a hit on the couple after objecting to their strict no-leather policy (as vegans, they operate on a strict "If it had eyes, get wise" policy). After eating a brownie that she realized too late was made with milk and eggs, Mary finds herself at a gigantic slaughterhouse, where she finds Joe strapped to the production line, heading towards the giant slicer. She frees him with her expert fabric-cutting skills, locks the evil dealer into the walk-in freezer, and then returns home with her man to collapse in an eco-conscious easy chair.