close
If Joseph Gordon-Levitt can do it, who's next?

Who Are The Next Action Stars? We Rank The Top Seven Contenders 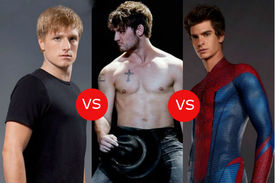 With three thrillers in three months—The Dark Knight Rises, Premium Rush and Looper—Joseph Gordon-Levitt is determined to turn himself into an action star. And why not: he's taller than Sylvester Stallone. But these days, young action stars are rare—most on-screen grenade-throwers are closer to Stallone's age than Gordon-Levitt's. Who are today's new crop of he-men and he-woman, and who among them might pull off the physical transition? We rank the seven top contenders from least to most promising.

Taylor Kitsch
All three of his 2012 efforts—Savages, Battleship, and John Carter—were critical and/or financial disappointments, crushing Kitsch's momentum from TV's Friday Night Lights. He has a few more films in the works, but only one or two more shots to prove to Hollywood that he can do right by the big screen before he's relegated to B-movies, and then shelved with the other minor has-beens. Can you say James Van Der Beek?
SCORE: 7/10 bazookas

Henry Cavill
Cavill's most major gig to date is Showtime's The Tudors, but the hunk stripped off for Tarsem's Immortals and is about to star in next year's Man of Steel. The Superman role established Christopher Reeves as being large and in charge, but it didn't do much for Brandon Routh. (As for Dean Cain, that's a matter of opinion.) It helps that Christopher Nolan is associated with the film as a producer, because our culture is fixated on flawed heroes, which Clark Kent most certainly is not. Cavill will need to deliver a stellar performance to prove that he is more than a pretty face plus CGI—especially because a failed superhero movie is like Kryptonite to a budding career. Better buy a lead shield, Cavill.
SCORE: 7.4/10 bazookas

Alex Pettyfer
Starring in I am Number Four and Beastly last year didn't do much for Pettyfer's box office history reputation, but playing "The Kid" in Magic Mike won him the hearts of many a besotted girl and boy. With abs like his, no one is going to deny Pettyfer a chance to strip off again. But should they let him act? His next movie, The Butler, casts him as, well, a butler. Is anyone who paid for two hours of on-screen seduction going to pay for two hours of fully clothed deference? By Jeeves, I think not.
SCORE: 7.8/10 bazookas

Andrew Garfield
Boy wonder, or kid in a leotard? This is the question Garfield faced after he impressed critics and not audiences with The Amazing Spider-man. That plus The Social Network majorly boosted his visibility...just in time for him to take a break from making movies and decamp to Broadway. Despite his Tony nomination, the move is doing nothing for his mainstream appeal. But at least swinging from skyscrapers could keep him employed for a decade, so long as he doesn't pull a Tobey Maguire and only do two major roles in the four years after the series ends.
SCORE: 8/10 bazookas

Elizabeth Olsen
The younger sister of the ubiquitous Olsen twins has fashioned herself a unique niche in the wake of Martha Marcy May Marlene: she can do a respectable, thoughtful indie and a great thriller. She's too talented an actress to become a dyed-in-the wool action heroine, but there are few women who specialize in action at all, much less young ones—Jessica Biel has passed the big three-oh, as has Zoë Saldana. Olsen's upcoming film that best exemplifies her bifurcated approach: Kill Your Darlings, in which she plays one of a band of Beat poets drawn together by a mysterious murder. By balancing profit with artistic pleasure, she appears to have a firm handle on her career.
SCORE: 8.2/10 bazookas

Liam Hemsworth
Sure, he starred in The Hunger Games, but a hit franchise doesn't guarantee a prosperous career. Taylor Lautner has no movies lined up immediately after Twilight, and what exactly is Rupert Grint doing nowadays? And Hemsworth's Hunger Games heartthrob did little more than grimace, plus many of the fans he earned doing that were too young to watch him take on a slightly more complex role in The Expendables 2. Still, with five more films slotted before 2014, Liam has the time and opportunity to find the right combination of face- and muscle—time to win over the men as well as the ladies-as long as his pop star fiancee keeps him out of the tabloids.
SCORE: 8.5/10 bazookas

Josh Hutcherson
Hutcherson figured out Hollywood before he hit 20. After earning critical respect in The Kids are All Right, he went mainstream in Journey 2: The Mysterious Island, and then solidified his tweeny fanbase as the premiere Hunger Games heartthrob. With the Red Dawn remake slated to come out before the next Hunger Games, and three more films lined up after that, Hutcherson is guaranteed to have work for the next few years regardless of the critics or the box office. Despite this, he loses points for a fact he can't control: can his short-guy charm last after he starts playing adult roles? He needs advice from fellow 5'7" action star Tom Cruise.
SCORE: 9.3 of 10 bazookas