Who Fares Worse in Hollywood Flicks: Republicans or Democrats? 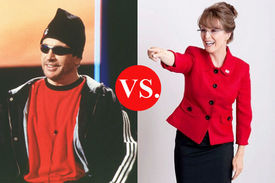 Hollywood is a famously liberal place. In addition to being populated by attendees of star-studded fundraisers for Obama, it's a reliable source of progressive propaganda—or is it? Earlier this year, Hollywood produced Game Change, an excoriating take on Republican presidential hopefuls John McCain and Sarah Palin that fulfilled just about every fear and resentment rabid conservatives have about the liberal media elite. And this week, it rolls out The Campaign, which looks a lot like a who's-insaner contest between GOP presidential primary also-rans Rick Perry and Rick Santorum. But studios know that to be a part of the "lamestream" media, they must pander to—and parody — both sides of the aisle. So which political party comes out looking more ridiculous in the movies? To find out, we pit three fictional Democrats against three fictional Republicans:

Rep. Charlie Wilson (D): The eponymous hawk (Tom Hanks) in Charlie Wilson's War is a womanizing, cocaine-snorting boozehound from Texas who thinks with his dick more than his head. But Wilson isn't just another useless, ne'er-do-well good old boy. Urged on by a Southern socialite (Julia Roberts), the playboy politician pulled the strings behind the largest covert mission in history, arming Afghani fighters to help them get rid of their country's Russian invaders. But war is easy—reconstruction isn't. Wilson's failure to assist in building a civil society in post-Soviet Afghanistan led to a takeover by the Taliban—and a safe haven for Osama bin Laden.

Gov. Sarah Palin (R): After being chosen as John McCain's laughably unvetted running mate, Game Change's Sarah Palin (Julianne Moore) becomes the picture of mental instability. Director Jay Roach, who also helmed The Campaign, finds the Alaska governor maniacally moody, arrogantly convinced that her political ascent is part of God's plan, and reliably falling into a catatonic stupor whenever she has to learn new facts. Palin's also decidedly not smarter than a fifth grader: she thinks that the Koreas are one country, and that Queen Elizabeth rules England. But truth is much stranger (and scarier) than fiction: Moore's Palin is temperamental because she's on a crash diet and, yeah, maybe kind of dumb—but she's definitely not a demagogic martyr who's deluded enough to think she's a foreign policy expert because she's glimpsed Russia from her window.

Round 2: The Singing Statesmen

Sen. Jay Bulworth (D): Raging asshole or racist asshole? That's the main debate about California Senator Jay Bulworth (Warren Beatty, who also directed and co-wrote), a disillusioned and newly destitute politician who puts a contract on his life and uses his last few hours to speak some harsh truths about the way things work. Unfortunately, Beatty's idea of telling it like it is consists of pointing out how a lot of Hollywood insiders are Jewish and telling African Americans that, "If you don't put down that malt liquor and chicken wings and get behind someone other than a running back who stabs his wife, you're never gonna get rid of somebody [a lazy, ineffectual politician] like me!" This is, of course, before he goes full-on wigger by adopting a doo-rag, rapping in front of TV cameras about America's social ills, and starting an affair with a young Halle Berry. Which, come to think of it, just makes Halle Berry look ridiculous.

Sen. Bob Roberts (R): Like Warren Beatty, Tim Robbins starred, directed, and co-wrote Bob Roberts, a mockumentary about a Pennsylvania Senate candidate with a great shtick: he rewrites iconic folk songs from the Sixties ("a dark stain on American history") to argue that we undo all of that decade's social progress. When he's not being lauded as a "rebel conservative" for performing "The Times, They Are A-Changin' Back," the millionaire businessman does typical rich guy stuff like fencing and making fun of poor people. But Bob Roberts reaches new heights of outrageousness when he pretends to be paralyzed from the waist down after a fake assassination attempt to earn the sympathy vote. Hey, it worked for FDR.

Round 3: The Wannabe Dictators

Pres. Judd Hammond (D): Big government solves everything in Gabriel Over the White House, which has its hack president, Judd Hammond (Walter Huston), becoming a Mussolini-like "benevolent dictatorship" after being possessed by the Archangel Gabriel. The Depression-era film finds its heroic commander-in-chief restoring a stable economy, eliminating crime, and instituting world peace—by dissolving Congress, executing criminals without a full trial, and threatening the rest of the world with Teddy Roosevelt's big stick. Producer William Randolph Hearst intended Hammond as a model for then-President Franklin Roosevelt to follow (FDR even suggested some early changes to the script), and the fictional POTUS returns the favor by mythologizing one of the most influential and ambitious Democratic presidents of all time.

Pres. Richard Nixon (R): In Dick, Richard Nixon (Dan Hedaya) is such an inept criminal that his most formidable opponents turn out to be two airhead teenage girls (Kirsten Dunst and Michelle Williams). But the real source of Tricky Dick's anguish is his complicated relationship with his dog: he's disturbed his dog doesn't like him, so he threatens to "feed [it] to the Chinese." But if he's not a super-criminal, he is at least a decent president. He saves the world from nuclear catastrophe, thanks to the pot-laced cookies the two girls unwittingly feed him, which have a mellowing effect on him and the Russian premier. (Unfortunately, the space cookies also probably heightened his paranoia.) And he earns, at least temporarily, the adoration of Michelle Williams, years before she played the lover of Nixon's arch-rival, John F. Kennedy.

Based on the score after these three rounds, we'll have to tentatively conclude that the Democrats come off looking slightly more ridiculous than the Republicans, at least among movie politicians. We will, of course, have to revisit the issue when the inevitable biopic of another GOP hopeful, Herman Cain: I Choose You!, arrives in theaters.