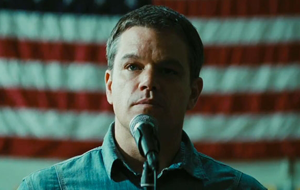 From art house projects to higher profile releases, director Gus Van Sant has covered his fair share of the Hollywood medium over the years. This Christmas he debuts what seems to be his most easily accessible flick in four years, Promised Land. Starring Matt Damon, John Krasinski and Frances McDormand, the film tells the story of a natural gas salesman whose company wants to take advantage of the resources beneath a small American town. In the lead, Damon's character finds his moral compass being tested after seeing the potentially negative impact of his work.

The material isn't the first foray into social issues-driven filmmaking for Van Sant. Promised Land is his "mainstream" follow-up to 2008's Academy Award-winning Milk. Although that film fared well with Oscar, it didn't find a particularly large audience as it banked just under $32 million domestically and $54.5 million worldwide. Still, on a $33 million combined budget, that made it quite profitable.

Van Sant's other high profile flicks over the years include 2000's Finding Forrester and the 1998 financial disaster that was the remake of Psycho. But he's most well-known for Good Will Hunting. The 1998 drama not only banked almost $226 million around the globe (including $138 million in North America), it went on to win multiple Oscars and put both Matt Damon and Ben Affleck on the Hollywood map.

Speaking of Damon, his own recent track record is important to consider when looking at what potential Promised Land might have. His most recent hit, We Bought A Zoo, catered to a much different audience last Christmas but ended up grossing $120.6 million globally against an $85 million negative cost. The gross-to-budget differentials are pretty similar for Damon's other recent flicks such as Contagion ($135.5 million worldwide), The Adjustment Bureau ($128.5 million) and Hereafter ($103.9 million) -- although the former was a domestic disappointment ($32.8 million) as international audiences ended up saving it.

Damon's track record is pretty solid, although 2010's Green Zone bombed by making $96 million worldwide after Universal poured in $150 million worth of production and marketing costs. The studio relied on the appeal of Damon and director Paul Greengrass (hot off the Bourne franchise) to draw some widespread interest in a film set during the Iraq War. Oops.

Clearly one star alone cannot sell a film to mainstream audiences if the subject matter is something they don't long to see in theaters. He's not the only star to fall victim to that fact, though: comparable socially-conscious movies such as Michael Clayton, The Ides of March, Damon's own The Informant!, and State of Play all missed out on the $50 million benchmark domestically (and $100 million worldwide). The former two were ultimately successful thanks to strong word of mouth and modest budgets, but the latter two weren't quite as lucky in terms of profit.

Looking further back, films such as North Country ($18 million domestic) and The Insider ($29 million domestic) similarly failed to reach a wide audience during the times of their release despite Oscar buzz for both. 1999's A Civil Action ($56.7 million) performed well in terms of gross, but was hampered by a huge $82 million combined budget.

The stand-out among modern whistle-blower movies is unquestionably 2000's Erin Brockovich. Made for $83 million, the Julia Roberts-led flick banked a huge $126 million domestically and $256.3 million worldwide.

With a limited release date that could make it attractive for older audiences and Oscar-friendly crowds early in 2013, Promised Land boasts the talent necessary to get some attention. But unlike many socially-conscious flicks, the movie has to be a crowd-pleaser. Otherwise, its wide release expansion in January won't go so well. And as box office history has taught us, it comes down to letting a film of this nature find its legs instead of over-spending on marketing trying to sell a concept that isn't historically likely to capture a huge audience upfront. By doing that, and with a solid film in the end, Promised Land will have a shot at genuine success.