Imitation of Strife: Five Films About the Horrors of the 1950s 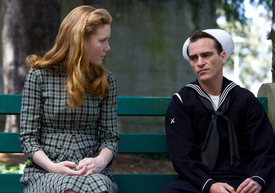 Director Paul Thomas Anderson's The Master is a lot of things: a critical take on Scientology, a tale of friendship between two disparate men, the story of a troubled veteran suffering from an undiagnosed and perhaps undiagnosable malaise. But the film's wildest ambition is to explore an often overlooked aspect of the 1950s: the clash between that decade's triumphant optimism and open postwar wounds, and how it paved the way for evident absurdities like The Cause, the nascent therapeutic movement in the film, to flourish. For decades, pop culture—especially of the seventies and eighties—was content to find an American Eden in the fifties, even going so far as to call that quietly turbulent decade "Happy Days." But a few films, like The Master, have opted to look under the pastel veneer of the fifties at its highly specific neuroses and anxieties. Here are five films, both classic and contemporary, that keep company with The Master in resisting the knee-jerk nostalgia for the 1950s:

The Man in the Gray Flannel Suit (1956) - Tom Rath (Gregory Peck, dapper as always) is a businessman with a soul-crushing corporate job and an emotionally empty existence in the suburbs. So far, so familiar. What distinguishes The Man in the Gray Flannel Suit as a reflection of its time as well as an audacious classic for the ages is its honesty about the experiences of soldiers during wartime. Having killed 17 men during World War II, Tom can't forget his past—and it's not just the PTSD that won't leave him be, but the Italian woman he had a child with during his deployment. That such a scandalous yet pragmatic rendering of post-war existence was a huge hit upon release suggests that Americans in the fifites were still indelibly haunted by the previous decade's historical atrocities and personal betrayals.

The Majestic (2001) - If The Master and The Man in the Gray Flannel Suit illustrate the Greatest Generation's rocky return to civilian life, The Majestic deals with yet a greater hardship—that of living with the absences left behind by soldiers who never returned, especially when the rest of the world seems eager to forget all about the war. B-movie screenwriter Peter Appleton (Jim Carrey) flees Hollywood after being accused of being a Communist. Upset that his showbiz career is over, he drunkenly crashes his car and wakes up with no idea who he is. Peter is mistaken for the golden boy of a small, struggling California town—a young man long thought to have died in the war—and resumes his relationships with his "father" (Martin Landau) and "girlfriend" (Laurie Holden). The film targets its rage at McCarthyism, the obvious villain, but has greater difficulty resolving the survivors' loss of hope, symbolized by the boys that never came back.

Imitation of Life (1959) - From Mad Men to The Help, Hollywood can't seem to tear itself from the glamorously depressed housewives of the pre-Feminine Mystique years. But Imitation of Life doesn't just sit at home sullenly smoking cigarettes; it has its female characters doing all they can to claw themselves out of their gilded cages. Lora (Lana Turner) pursues the spotlight on Broadway despite her acting career costing her disapproving boyfriends. But the stakes are raised even higher for the teenage daughter of Lora's black maid, Sarah Jane (Susan Kohner), the deeply conflicted, light-skinned girl who takes every opportunity to pass as white. Even after being badly beaten by a boyfriend and fired by her boss upon being discovered as black, it's easy to understand why Sarah Jane persists in trying to pass—life as a white woman, even in a disreputable profession (in her case, a chorus girl in a seedy club), is a far easier one to live than as a long-suffering mammy like her mother.

Rebel Without a Cause (1955) - It wasn't just the word "teenager" that was invented in the fifties, but the idea of teen angst as well. No film was more influential in codifying teenagers as a sullen, antisocial, and not a little stupid species than Rebel Without a Cause, which cranked the dial up to 11 on the adolescent ennui. Juvenile delinquents James Dean, Natalie Wood and Sal Mineo have knife fights, play chicken with cars, and shoot puppies. Dean's greatest wish is that his dad would hit his mom: "If he had guts to knock Mom cold once, then maybe she'd be happy." Needless to say, these kids are pretty dumb. But their confusion and pain are real, and their inarticulate hormonal maelstroms became the hallmark of a new demographic that found a reason for being in perpetual unhappiness.

Ed Wood (1994) - Tim Burton's biopic about the man often called the world's worst director isn't explicitly a commentary about the fifties, but it certainly works as one. Ed (Johnny Depp) struggles to finance and make a film about a transvestite called "I Changed My Sex!" (later retitled "Glen or Glenda") and recruits his longtime idol, an aging and drug-addicted Bela Lugosi (Martin Landau), to star in it. (Being a happy transvestite himself, Ed persuades Lugosi that he's the perfect director for the project.) Later, he shoots "Plan 9 From Outer Space" with a group of his friends, a carnivalesque bunch of peculiarly visaged folk, but runs into numerous obstacles, not least of them his absolute and outright lack of talent. There's something about Ed Wood's undeniable loserdom and irrepressible optimism that encapsulates how the fifties quashed those who failed to conform to the social strictures of the era, yet were free to let their freak flags fly—just as long as they weren't expecting to attain any sort of respect or success. Rebels with causes had to wait until the sixties for that.

Tags: the master, the man in the gray flannel suit, the majestic, imitation of life, rebel without a cause, ed wood, mad men, the help
Print