Looper's Joseph Gordon-Levitt won't explain how to be Bruce Willis: "It's like a magician revealing his secrets" 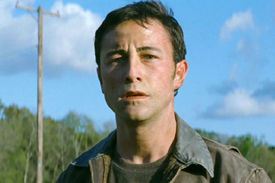 Crunch the numbers and Joseph Gordon-Levitt has been acting for 87 percent of his life, ever since a casting agent spotted him playing the Scarecrow in The Wizard of Oz at age four. So even though he's only 31—an age when Jeremy Renner was still just a fulltime makeup artist going on castings—Gordon-Levitt's career can already be divided up into periods: his elementary years as a commercial actor, the middle school stretch where he leaped into TV shows and then graduated to 3rd Rock From the Sun, where he'd spend six years as a teen heartthrob, and then that endless four year stretch between when he tried to leave sitcoms behind and mature into serious acting. One of the first directors to take a chance on Gordon-Levitt was Rian Johnson, an ambitious former film student trying to get his debut film, Brick, made for peanuts. For both of them, money mattered far, far less than a chance to prove their stuff to Hollywood. And they did. With Joseph Gordon-Levitt now a major star (and no, he won't say whether he'll play Robin in a Batman spin-off), the time's right for the two to reteam and show off what they can do with a little more clout—and a lot more cash. Enter Looper, in which Gordon-Levitt plays a hitman hired to killed people sent back in time from the future. But when his future self, played by Bruce Willis, travels back in time to be whacked, Gordon-Levitt can't pull the trigger. It's not that he doesn't want to commit future semi-suicide—it's that he's literally met his match.

Your character, Joe, would have been born, like, right now. And he's had such a hard life, it's interesting imagining that the future from this point could get really bad.

That is interesting. I'll be really honest, I hadn't thought of it that way—I hadn't thought of being born right now. But that's true if you do the math. While we were shooting, we were less specific with the exact year. We knew it was approximately 30-some years in the future, which would mean that my character was born now-ish. But in the final movie, they put in the actual year, which I think is good that they made that decision, but when Rian and I were talking about it while we were shooting, we for a while thought we wouldn't specify the exact year. You make the movie three times: once when you're writing, once when you're shooting, and once when you're editing it.

And there there's the fourth time, when it's remade in somebody's head—and you have zero control over that.

Yeah, that's the beauty of movies or art—whatever you want to call it. I'm glad you say that because it seems nowadays that that part of the creative process isn't thought of as much. Like, when people write about movies they write about it objectively oftentimes. "The movie is this, the movie is that." I wish more people wrote about movies including their own reaction.

Exactly. A movie is never seen in a vacuum—it's all about its relationship to the person who watches it. When you and Rian made Brick together, that was this really huge launching pad for both of you. Working with him again after all these years have gone by, what's the dynamic like now?

It was different, but I feel like we both grew together. And also, we've just been friends the whole time, Rian and I. It's not like we haven't spoken to each other in years, or it was a reunion—he's actually one of my best friends. We became fast friends when we made Brick together, and it felt very similar. It didn't feel like a whole new ball game, it felt very comfortable and familiar. And I do think that's a significant factor in why we work well together, is because we know each other so well. Literally, like, hanging out with a pint.

Pounding some brewskies, talking about art?

Right. But less of the brewskies—Rian's taught me about the ways of a whiskey appreciator.

Sophisticated! He told me to tell you again how grateful he was for you putting up with three hours of makeup every day to look like a younger version of Bruce Willis. It was really subtle—sometimes you would look exactly like you, and sometimes you wouldn't at all. Could just list for me the slight changes in your face that are hard to pick up?

Frankly, we've actually been not specifying just because it's like a magician revealing his secrets. But I'm very happy to hear that it had the precise effect on you that it did, because we agreed that we wanted it to be subtle. The last thing we wanted was for it to be something that would be distracting. We just wanted a little nudge, because it's a normal thing in movies for two different actors, or a younger actor to play a character as a older person. So, we weren't too worried—we thought audiences would go along with it anyways. But we also wanted to give it an extra inch, just to really make it always a present part of the character. And yes, three hours every morning is a lot to go through, but for me, it's a huge impact—even for a subtle effect. Just looking in the mirror at the end of the three hours and seeing a different face than my own was an enormous part of how I was able to march in and do it. I wanted to be very different from myself.

Is there a fear that if you play a big role but it doesn't look like you, people might not put it together?

No, I think that's the coolest thing that can happen. The ultimate goal as an actor is for the audience to watch the whole thing and never know it was you, to be surprised that it was you. And it's actually something that I worry about. I've been very lucky in the past few years with several movies out there that now there are more people that are recognizing me, and that's wonderful. But I never want an audience to watch a movie that I'm in and think of me as me. I want them to think of me as the character. And putting on the prosthetics helped with that. But we did joke all the time that people were going to like this and say, "Well, I want to hire that guy." And I'd be stuck in the makeup for the rest of my career.

When you were studying Bruce Willis to get the mannerisms down, were you looking at contemporary, older Bruce, or did you go back and study younger Bruce?

No, I looked at contemporary Bruce because I wanted to match with him now, because "him now" would be in the movie. It'd be less important what was he was actually like 20 years ago and more of what his impressions are, the way he moves today. But really, the main thing I was trying to do is to train like him. That was a big part of it, was just hanging out with him.

Did Bruce teach you new things about shooting action?

Well, he's very good at it. I mean, this sounds obvious, but you could tell that this is a guy who really knew what he was doing. One thing I could say is that he, along with all the best action people I've ever worked with—he has this in common with Chris Nolan—he really really insists on that the hero talk, the "C'mon, be a man, you can take it, doesn't hurt, you'll be fine," that there's zero, none of that. It's the opposite, actually. It's like being very, very emphatic and enthusiastic about everything, while being completely safe. And I think that's a great thing. I know people talk about daredevilry and stuff. That's an ancient performance art, actually putting yourself in harm's way. But that doesn't interest me. Movies are, in the end, an illusion. And it's about cracking that illusion to tell a story.

What I like about the dynamic between your two characters—even though it's kind of weird to talk about them as two characters—is that it's almost like your character has to hate what he takes pride in in himself: that he's smart, tough, and impossible to beat.

That's true, although maybe it's a fear more than a hate. Besides all the cool sci-fi action stuff, what's really cool about sci-fi is that there's a different side of it beyond the cool-looking technology, and the futuristic cityscapes and all of that. Sci-fi allows you a framework with which you can ask these big questions. You get to confront your older self, or your younger self, and to put it in a real-life situation, rather than just talking to a backdrop.

If Joseph Gordon-Levitt from 2042 were to knock on your door today, what do you think he'd be like?

Um, probably a little more relaxed than I am.

One thing I think is interesting about sci-fi movies is the future almost always looks gloomier than it is today. Do you think it's inevitable that the future gets worse?

I think in a lot of sci-fi movies the future looks really cool. But I think the way that Rian showed the state of the world in Looper, is really subtle and really smart. It's really well done. It's interesting because it was a part of the shooting that I wasn't there for as much when they'd be shooting little snippits and establishing shots and atmospheric moments that I wasn't in, and so I actually wasn't aware, or as aware, of all that stuff. I mean, I was aware of it because it was you could see that stuff in the scenes I was in—people in tents and etcetera—but it was great to see it when I watched the movie for the first time. It was like, "Oh, wow!" I wasn't really expecting it. And it really lands nicely, because it doesn't feel like its hitting you over the head with it, it's pretty subtle, but it's there. And it's true—it is the direction things are going in right now: rich getting richer and poor getting poorer.