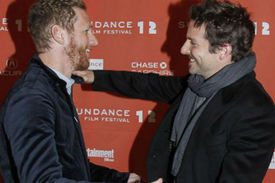 This isn't a story where a big name actor and a first time director butt heads on the set of a Sundance drama. "We're in love with each other," jokes Bradley Cooper. Or really, it's no joke. He and director Brian Klugman have been friends since childhood, so when it came time for Klugman—an actor himself—to finally shoot a script he's been trying to get made for a decade, it just made sense that Cooper would play the lead. That film, The Words, opens this month and stars Cooper as Rory Jansen, an aspiring novelist and newlywed (to the gorgeous Zoe Saldana) who finds a 70-year-old handwritten manuscript in a vintage briefcase and can't resist passing it off as his own. What follows is literary fame and a heavy dose of guilt, in part provided by fellow writers Jeremy Irons and Dennis Quaid and bright-eyed grad student Olivia Wilde. We rounded up Bradley and Brian and asked them how they spun a 20-year friendship into a prestigious passion project.

You've known each other a really long time.

Bradley Cooper: Yup, since we were 11. I think it keeps getting earlier and earlier the more we tell the story. It was ten. No, we were ten! I transferred to a private school that he was going to with a bunch of guys that were mean, and he was the leader of the pack.

Brian Klugman: I was not mean.

Bradley: He's going to get really mad at me. I'm joking. We both came from the same area, which was not where everybody else from that school came from, so we would take the train to that school. So we kind of became friends by proxy, and then we just realized we had so much in common—our love of movies, our love of acting—and so we just kind of became really close early on in seventh grade. And then we kinda got a little distant, and then we came back, and then when I went to college, he went to college. We always kept in touch. I remember the first place I moved in LA, I slept on his couch. And then we just became best friends again. We've been there for each other for 20 years.

Brian: And for everything.

I'm picturing you guys at Sundance with The Words—was there a moment when you gave each other this high five to the former 10-year-olds that you were?

Bradley: That actually happened. We high-five each all the time—it's really very annoying for other people. But the most celebratory we were was when we were on set. The whole surreal and ecstatic experience that was being on set with these great actors like Jeremy Irons and Dennis Quaid and Zoe Saldana and Olivia Wilde—we would sort of be looking at each other like, "How the hell is this happening?!"

This film took eight years to get made. Like Rory Jansen, would either one of you have sold your soul just to hurry up and get it done already?

Brian: It was even longer than eight years—it was 11 years total to get the movie up and running.

Bradley: When I first came to L.A., he had written that script with Lee Sternthal and I remember watching a reading of it that he was having.

Did you know at the time that this was a part you wanted to play, or did he know that he wanted you in it?

Bradley: I wasn't even in the conversation—I was like a friend from high school. I thought it'd be great to do any role, but he was like: "Bradley, my buddy from high school who's trying to be an actor? Good luck."

Brian: Not even good luck.

What was it now that made you realize Bradley was right for this role?

Bradley: All the movies I've been in lately!

Bradley: He never thought I was right for this role, but he thought, "All right, I can finally get my movie made."

Brian: Nonsense, this is just complete nonsense. He's trying to slander me. It's that he really doesn't have any ability to do anything dishonest, and that is both onscreen in his emotions, and also just in his life. He's just incredibly honest, and it's a great quality to bring to that character. His acting is very truthful and grounded.

There's this moment where Rory finds the manuscript and starts reading it—it reminded me of Amadeus, that scene when Salieri realizes he'll never be as good as Mozart.

Brian: That's a great scene in Amadeus when he says, "God gave me this incredible love of music and then made you. And what power I have is to appreciate how good it is." That's heartbreaking.

Bradley: It is very similar. And it's not like Rory can't write. He actually can write, but this novel a whole other level.

For both of you guys, when you come across talent that just blows you away in your own worlds, does it make you work harder or is it just discouraging?

Bradley: It's never, ever discouraging, not in my whole life. I think I'm blessed with a such a pure love of acting and film that all I've ever done is feel inspired.

Brian: The best thing is to love art—to see it, to be around it. I think maybe when I was younger, I was really scared and intimidated. I mean, I'm in awe of the sublime. But I was appreciative.

Related to that, how valuable do you think ambition is to creative people? Is there a limit where you can be too ambitious?

Bradley: I wouldn't say that Rory's tragic flaw is his ambition at all. I think he's not a man. His lack of patience, his lack of ability to have his own voice. He just didn't have a voice enough to say it's not mine.

Brian: But blind ambition can be incredibly corrupting.

What's is one thing each of you wishes you could take credit for? Say, "I have now stolen Marlon Brando's performance in On the Waterfront—that was me."

Bradley: Honestly, this may sound cheesy, but I think we are both blessed with a true joy of the doing. It's nice when people like or appreciate the work, but the truth is, I'm in it for one reason: the joy of doing it. So the idea of taking credit for something that I never did feels like a nightmare to me.