close
For studios, the key word is "sequels." 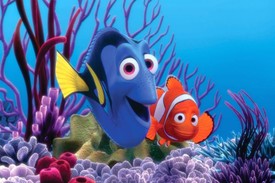 It's been three years since Avatar made a bazillion dollars and made Hollywood see dollar signs and resolve to convert to or film every next big release in 3D. And it's been two years since many of those same studio heads realized that strategy wouldn't work for every movie. Audiences began to shy away from theaters over rising ticket prices and poor 3D experiences, but nevertheless, the illusion still works on the random occasions when audiences turn out for a 3D pic.  But when they don't, it's up to the international market to save the day.

Now we're at a stage in the game where 3D has become an excuse to re-release past box office hits. After all, if fans are willing to drop their cash on Titanic 3D in theaters, then 3D is easily argued to be meeting a demand. Domestically, of course, the demand isn't as strong as it is among our international friends. Take the aforementioned Titanic 3D, for example. It banked a solid $57.9 million here in the States, and while that ranks as the second-best 3D re-release so far, the James Cameron epic pulled a huge $286.5 million internationally. Titanic has always been significantly popular overseas, as evidenced by its 67% international share during the original 1997 run (long before market expansion and 3D made that kind of share more common), but the film's second run nearly doubled the most successful 3D re-release before it.

That juggernaut, of course, was last year's The Lion King 3D. Disney's modern classic totaled $176 million worldwide throughout the final quarter of 2011, but $94 million of that came from domestic audiences. In other words, it still stands as the highest-grossing 3D re-release in North America. Disney's next attempt to convert and re-package another of its modern classics didn't go quite as well when, four months later, Beauty and the Beast 3D made just $60.6 million worldwide—$47.6 million of that coming from North America. A modern classic to be sure, but not one that audiences were excited about seeing on the big screen again.

Naturally, we have to include the 3D re-release of Star Wars Episode I: The Phantom Menace in our discussion. Prior to its unveiling, many were skeptical about how the converted repackaging of a film that many fanboys revile could actually perform. The new run didn't blow away any records (a stark contrast to the 1997 re-releases of the original trilogy), but Phantom Menace 3D did relatively well in retrospect with its $43.5 million domestic take and $103.5 million worldwide haul.

Of course, this whole trend really began back in 2009 *before* Avatar proved how lucrative 3D could be. It was Disney/Pixar that decided to test the waters by re-releasing both Toy Story and Toy Story 2 as a two-for-one package deal in the 3D format back in October 2009. Banking $30.7 million overall, the experiment was considered a modest success ahead of the anticipated Toy Story 3 which released to critical acclaim and won its box office year in 2010.

And that leads us to our final point. Or, rather, a question: when did re-releasing classic films in 3D start becoming a test bed for possible sequels? No, we're not suggesting that the Toy Storys' 3D re-releases had anything to do with the decade-long development of Toy Story 3, or that James Cameron is secretly planning Titanic 2. In fact, most of the 3D re-releases thus far seem to be legitimate moves toward trying to recapture the big screen magic of classic tales. In Phantom Menace's case, it might not be a "classic" to a lot of people, but its still one of the biggest box office hits in modern history and there's clearly an audience for it—Star Wars as a whole is nearly invincible in that aspect.  Regardless, everyone knows it's just the necessary path before finally getting to what fans really want: the forthcoming 3D conversions of the original trilogy.

But all of that might be changing as we speak. This weekend, Finding Nemo 3D swam its way into theaters. Not only did it miss the heights of many expectations for its opening, the flick's opening weekend of $16.7 million is below par with that of every 3D re-release we've discussed, Toy Story excluded.  So the question is, how much is the film's re-release performance is tied to Disney/Pixar's decision to make a sequel to the beloved Oscar-winner? Rumors of said sequel have been floating around for at least a year or two, but only recently did it start to look like one is officially moving forward. Ellen DeGeneres, in fact, signed on back in August.

It's hard to speculate what motivates certain sequels outside of the common sense assumption of being a quick cash grab. In Pixar's case, its even more of a conundrum. Sure, Cars 2 was a critical bust compared to the rest of their resume. But their only other two sequels so far turned out to be masterpieces in themselves. A good sequel keeps audiences wanting more, but a bad one quickly unleashes the film community's (often justified) cries of "Hollywood has officially lost all originality." We'll see next summer whether or not Monsters University can avoid the same creative pitfalls that Cars 2 practically embraced, but either way, is the upcoming 3D re-release of Monsters, Inc. in December really that necessary?

And that leads us to 2013, a year that will see five more 3D re-releases between April and mid-October. The recently confirmed Attack of the Clones and Revenge of the Sith (dropping in September and October, respectively) were always part of Mr. Lucas's 3D plan and come as no surprise. (And, no, the oft-rumored Episode VII still probably isn't ever going to happen.) The close proximity seems to indicate that Lucasfilm and Fox are very aware of the likely soft numbers for Attack of the Clones 3D, and that suspicion is nigh confirmed by the fact that it drops only one week after Disney's Little Mermaid 3D treatment. That's three 3D re-releases within just five weeks next fall, folks. And it's shaping up to be a battle of boys vs. girls.

The most interesting of the 2013 re-release slate are two films that were originally scheduled to open during the same summer month which begat their original releases so much success during the 1990s. Universal wisely backed away and shifted Jurassic Park 3D into the April 4, 2013 slot. That leaves Independence Day 3D opening on July 3, 2013—the first time we'll see a 3D re-release command a high profile release date typically reserved for major tent poles.

In the cases of those two, we can probably guess that their performances will be somewhat tied to current rumors and on-and-off again talk of sequels. In Jurassic Park's defense, the 20th anniversary of the film and sheer promise of families wanting to see Steven Spielberg's dinosaurs in 3D makes some sense.  But, given that two sequels already happened, it's probably no coincidence that the re-release is happening right at a time when it sounds like another sequel might finally come down the pike.

The more obvious of the intentions, though, has to be Independence Day. Unless a 17th anniversary is suddenly a noteworthy celebration, its quite clear that Fox is wanting to see how warm (or cool) the waters are. Rumors continue to fly around that the 1996 blockbuster will finally get the sequel(s) treatment sometime in the next few years, but are not yet official. Considering how much of the potential budget(s) would be devoted to salary for Will Smith alone, the bean-counters over at Fox will no doubt be pinching pinnies if ID4 3D fails to break the current trend of modest 3D success. Conversely, if it can pull numbers similar to Titanic 3D worldwide and Lion King 3D domestically, then the Fresh Prince might be in store for the biggest pay check of his career and we'll see Independence Day 2 by or before 2016.

It's a lot of informed speculation, and every film has its own set of circumstances, but the move toward 3D re-releases of films that just happen to be getting sequels or might get sequels is certainly no coincidence. The initial reaction might be to say "Here they go again beating a dying 3D horse."  But from a business standpoint, it kinda makes sense. With quality conversion work, the fans of 3D out there appreciate seeing their favorite films on the big screen again. For the non-fans of the illusion, at least the potential success of these re-releases could mean getting to see your long-awaited sequels soon thereafter.  For anyone else, well, just go out and support your local indie theater. They need it more anyway.

Discuss this week's edition of Number Crunch and vote for your favorite recent 3D re-release on our Forums.