To Protect And Scourge: How Other Dispensers Of Merciless Justice Compare To Judge Dredd 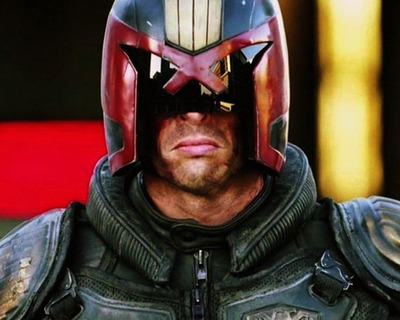 The Judge Dredd series is a curious artifact of the Cold War. Created in 1977 for Britain's 2000 AD magazine, Dredd takes place in a bombed-out wasteland that is an obvious expression of the very real fear Europeans had that the US and Soviets would eventually duke it out, and destroy the world in the process. It's also a striking parody of the emerging badass-killer-cop genre that has remained consistently popular for over 40 years. What kind of world emerged from the wreckage of civilization? One in which gigantic cities sprawl over North America, crime is rampant, and every cop, especially the titular character, is a ruthless law enforcer who acts as judge, jury and executioner.

Well, if imitation is the sincerest form of flattery, then what is exaggeration? Probably something even more sincere. We Americans have always been peculiarly obsessed with everything coming to an end, after all. And despite all the noise we make here in the States about The Rule of Law and The Constitution, nothing arouses our collective id quite like A Good Cop doing What Has To Be Done, pencil-necked authorities and wussy liberal voices of reason be damned. But how much do we love it? It might be terrifying to consider, but we need to be sure that if we ever end up living in a post-apocalyptic wasteland, we'll be protected and served by people who would just as soon kill us if it meant staving off the end of civilization.

With the The Karl Urban-starring Dredd, out today, being the first attempt to portray the character much as he appears in his long-running comic series, now is as good a time as any to see how representatives of the archetype he both parodied and influenced measure up to Mega City One's most successful cop. So, we've taken a look at four examples America's most ruthless Cold War-era law enforcement, and rated them according to Dredd's record. 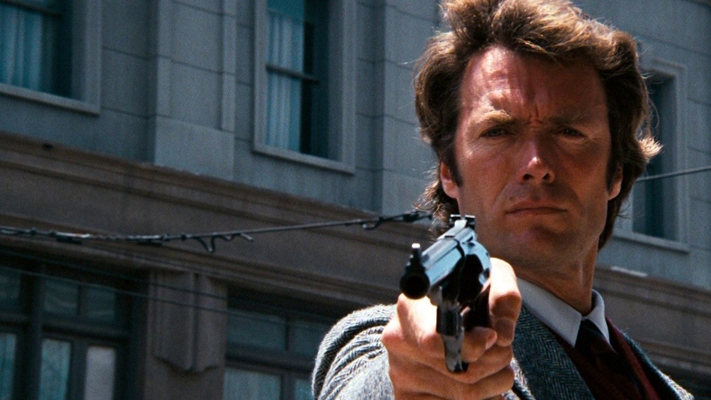 Clint Eastwood's iconic law enforcement hardass is the standard by which all subsequent cowboy cops must be judged. And why not? Harry Callahan is everything that Americans who felt left behind by the changes sweeping the country in the late 60s and early 70s desperately wanted to believe their authorities could be. Disregard for Miranda? Check. Disdain for those damn hippies? Check. Friction with PC liberals? Check. Execution without trial of a serial killer, complete with awesome one-liner? Check.

Then again, Dirty Harry was a reluctant vengeful demon, having been forced to take all of the law into his own hands only after dealing with a near total lack of cooperation from a city government seemingly more concerned with the rights of criminals than of their victims. And worse, his second time out, 1973's Magnum Force, had him totally selling out, taking down a ring of rogue cops who had decided to go on a criminal-killing spree rather than let the justice system do its thing. Way to kill the dream, Callahan.

Verdict: Harry loves dishing out richly deserved violence against criminals, but ultimately supports the rule of law and the process of American jurisprudence. In fact, unlike Dredd, who has killed thousands of people, Callahan's body count clocks in at less than 20. 2 out of 5 Judge Dredds; Not Reliable Enough For Post-Apocalyptic Justice. 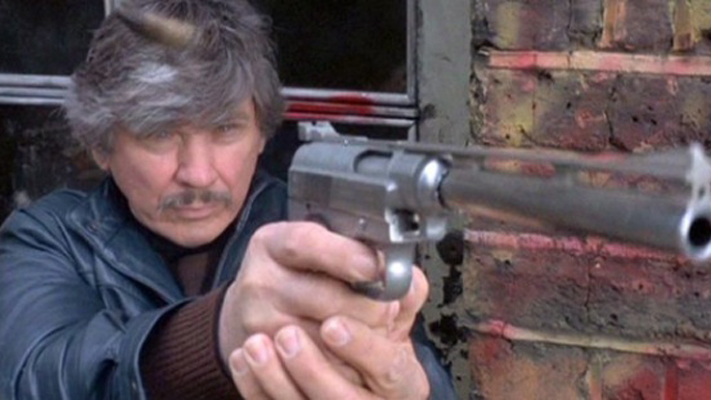 If Dirty Harry was America's collective fantasy about the police, Death Wish is its corresponding fantasy about themselves. Charles Bronson's Paul Kersey is a well-heeled architect and an upstanding urban liberal... until his wife is murdered and his daughter sexually assaulted by a gang of roving thugs. The cops tell him there's little chance of ever catching the criminals and suddenly, everything Paul thought he knew about himself is upended completely as he goes on a brutal, unstoppable killing spree through the New York City. He is precisely the kind of secret badass so many Americans imagine themselves to be, if only those damned bleeding-hearts didn't make it so difficult.

What makes Death Wish especially delicious is that at every turn, the law is thoroughly disregarded like it ain't even a thang. Yes, the cops have to put a stop to his killings, but Paul becomes a popular folk hero, so the New York City DA actually forces NYPD to back off. Even after he's caught red handed, he's simply evicted, 'permanently', from New York. So he relocates to Chicago, and then to Los Angeles where he continues his murde- er, justice-dispensing ways unmolested through 3 sequels.

Fun fact: Kersey manages to smuggle his first gun onto an airplane early in the first film. Take that, everyone living during the War on Terror!

Verdict: Paul Kersey is never made an official cop, and he is often pursed by them. But he's also allowed to pursue his vendetta largely unfettered, which he does with relentless fury for more than 15 years. He lacks Dredd's job security, but he shares Dredd's commitment to the job. 3 out of 5 Judge Dredds; Qualifies For Auxiliary Post-Apocalyptic Justice. 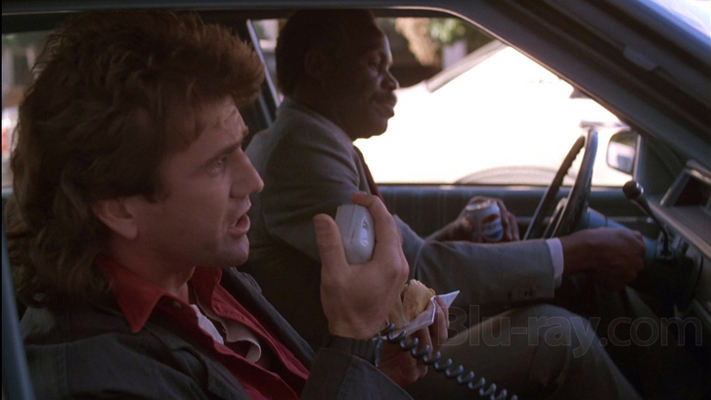 Dirty Harry is a badass, and Paul Kersey a ruthless killing machine, but they worked solo. But what happens when the dispenser of Extreme Justice is doubled? We get Riggs and Murtaugh from the Lethal Weapon series.

In Lethal Weapon, suicidal detective Martin Riggs (Mel Gibson) is teamed up with dedicated family man Roger Murtaugh (Danny Glover) to bust a heroin-smuggling operation with ties going back to the Vietnam War. Drug dealers are generally scum, especially when they're using traumatized former soldiers as part of their scheme, so obviously we support the Lethal Weapon duo's efforts to stop them. But did they really have to try to illegally assassinate the men who kidnapped Murtaugh's daughter? Yes, because 80's justice, that's why. We even get a climactic battle in which the LAPD agrees to stand down so Riggs can fight the big bad's evil henchman (Gary Busey) mano a mano, because that's apparently just how we roll here in LA.

Of course, kicking Gary Busey's ass is nothing compared to how this dynamic duo attended to matters in Lethal Weapon 2. Wanton property destruction, interference with a federal investigation, and a tremendous body count (our heroes dispatch a record 33 people over the course of the movie) are all well and good, but the film's ending is where things really get Dredd-y. Roger and Martin actually gun down another sovereign nation's official ambassador. Yeahyeahyeah, said Ambassador was the head of an international drug-and-precious-metals smuggling operation, but he had, as he gleefully tells a gut-shot Riggs, 'Deeplomatic Immunity'. Yes, even racist South Africans can benefit from the Geneva Conventions, and those rules can't 'just' be revoked by a revolver, no matter how awesome it is when Murtaugh says otherwise during the film's final moments.

Verdict: So what happens to Riggs and Murtaugh after they caused an international incident? They're promoted at the beginning of Lethal Weapon 3. Like Dredd, they have official sanction to dole out copious violence. Alas, they also deal with personal foibles getting in the way of justice. 4 out of 5 Judge Dredds; Definitely Post-Apocalyptic Justice Material, Recommend Subsidiary Role. 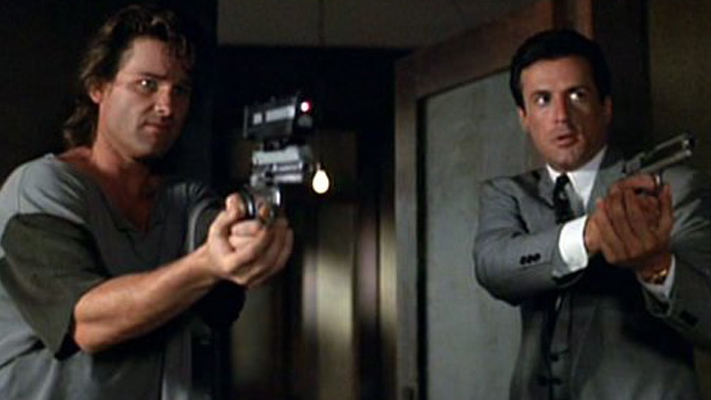 Ray Tango (Sylvester Stallone) and Gabriel Cash (Kurt Russell) are the two best police officers in Los Angeles. So it makes sense that an evil crime lord portrayed by the immortal Jack Palance would do everything possible to ruin their careers, up to and including framing them for a crime they didn't commit, thus getting them sent to a PMITA prison. So how does our beleaguered pair of cops deal with becoming unjustly convicted criminals? Simple: by committing a hell of a lot of crimes.

Verdict: And how are they rewarded? By getting their old jobs back and being hailed as the saviors of Los Angeles by local media. Also, Sly would later go on to play Judge Dredd in 1995. 5 out of 5 Judge Dredds; Hire Them As Judge Dredd's Replacement.