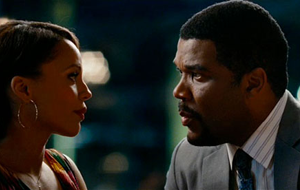 Tyler Perry is ready to step outside his self-made universe in a starring role for the first time with this weekend's release of Alex Cross. Based on the popular James Patterson novels, Perry is taking the character torch over from Morgan Freeman (who portrayed Dr. Alex Cross in Kiss the Girls and Along Came a Spider). The question is: where's the buzz at?

Compared to the over-shadowing release of Paranormal Activity 4 this weekend, it might be hard to tell. But our indicators are pointing to some strong interest in the flick among Perry's fan base. While that's not altogether surprising, it is a critical sign when considering that even his own biggest successes have usually relied upon his famous Madea character.

But Alex Cross is doing just fine as far as we can tell. Granted, Facebook activity is extremely weak, but all other metrics look promising. The film's Twitter activity over the past six days is running significantly ahead of Good Deeds and Madea's Witness Protection through the same time period (which opened to $15.6 million and $25.4 million, respectively).

Moreover, Flixster activity also looks promising. On the day before its release, Good Deeds had a 91% "want to see" score among 3,961 voters. Madea's Witness Protection sat with an 85% score from 8,235 voters. Currently, Alex Cross is at 90% with 6,812 votes in.

Reviews aren't helping things (sitting at 15% from 26 critics on Rotten Tomatoes currently) but while the online signs could be better for Alex Cross, they could also be much, much worse. The familiarity that Perry brings with him on top of the already well-established book series gives the film some foundation to overcome its disadvantages this weekend.

Perhaps even more encouraging is the fact that QED announced this morning their plans to follow up with a sequel, Double Cross. While sequels are commonplace, announcing those plans before seeing any box office results can sometimes - though not definitively - be an indicator of how they expect audiences to react to the current movie. Or, just a bold move.

The Boxoffice.com team is predicting an $18.4 million opening weekend, but the real litmus test may be whether or not it can get close to $23 million -- roughly the amount that Kiss the Girls and Along Came a Spider would have opened to with today's ticket prices.