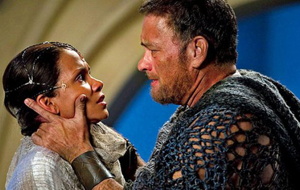 The Wachowskis' ambitious Cloud Atlas adaptation has been heavily promoted by Warner Bros. over the past few weeks, dating back to the extended trailer's debut in July that turned a few heads across various online film circles. Nevertheless, the material itself is considered a challenge to successfully sell to a mainstream audience so the industry is cautiously optimistic about the film's box office potential upon its release this Friday, October 26.

The question is: where's the buzz at now compared to recent sci-fi titles that were (or are) considered somewhat esoteric for a large audience?

Take 2011's Source Code, for example. Duncan Jones' well-received PG-13 flick was pulling close to 200 tweets per day at nine days out from release.  Through the Sunday before its release, it had totaled nearly 1,700 in five days. Facebook activity was modest at the time with 89,109 fans at five days out from release. The film opened to $14.8 million.

On this same weekend one year ago, In Time released to disappointing critical reviews and a soft $12.1 million debut. That was in spite of the fact that it had totaled 4,737 tweets during the same Wednesday through Sunday five-day frame before its release week.

This past summer's Prometheus blew every other comparison here away by totaling 39,047 tweets at nine days out to five days out from release. The film opened to $51.1 million, but of course, it had a huge preexisting fan base from the Alien franchise driving anticipation for it. Not to mention a 3D bump as well as a prime summer release date.

Most recently though was Rian Johnson's Looper. Before opening to a solid $20.8 million nearly one month ago, its Tweet count for the final five days entering the Monday of its release week was a respectable 6,381. That led both In Time and Source Code, and was able to capitalize on strong reviews plus a focused marketing campaign. In fact, Looper boasted 228,304 Facebook fans five days out from release - only 5,359 fewer than Prometheus itself at the same time. Online buzz was excellent.

How does Cloud Atlas compare? Not as well, unfortunately. The R-rated sci-fi drama tallied 4,033 tweets between Wednesday of last week and this past Sunday. That put it significantly ahead of Source Code, but well behind In Time and Looper. Facebook is also leaving something to be desired with roughly 85,000 fans as of Sunday. Again, that leads only In Time among our comparison films.

There are still a few days to go before release, which means the fat lady hasn't yet sung for Cloud Atlas. Still, for a film boasting stars such as Tom Hanks, Halle Berry and a plethora of other names in a large scope film directed by a still relatively well-known set of filmmakers, the online buzz doesn't seem quite as potent as it did back in July.

Perhaps it's simply because of the time of year. Releasing this kind of film on Halloween weekend right before the holiday season kicks off is a curious strategy, though one that could pay huge dividends if word of mouth does take off and any of November's films disappoint audiences. Moreover, with so many breakouts occurring in October already, audiences may be taking the weekend off to save some money back for the aforementioned holidays. In that case, simple bad timing could hurt Cloud Atlas.

If anything, the film itself may fall victim to the same traps that Darren Aronofsky's The Fountain did back in 2006. Despite some online interest at the time, that flick never managed to capture the general public's interest and opened in 1,472 locations to just $3.8 million.

Either way, its not unheard of for a film's buzz to find new life during the week of opening. Until that happens though, Warner Bros. itself appears to be cautioning the release strategy given the relatively low 2,000 theater count that Cloud Atlas pegged at.