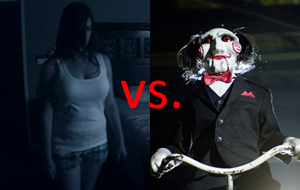 The horror craze just doesn't seem to ever completely go away, and maybe that's why it has remained one of Hollywood's go-to genres for (usually) inexpensive cash cows. The trend came to the forefront thanks to filmmakers like George A. Romero and his Night of the Living Dead series of films over the decades. A Nightmare on Elm Street, Friday the 13th, Halloween and Scream had their days of carrying the horror banner, and in 2004 Saw began its run of seven films over the course of seven years.

Stealing Saw's thunder in 2009, however, was the phenomenon of Paranormal Activity. Not only did director Oren Peli's shoestring budget of $15,000 turn the film in a hugely profitable success after word of mouth spread from festivals to Steven Spielberg's own ears (helping to land the film a distribution channel with Paramount), it took the torch from Saw and is now headed toward its fourth entry in as many years. With a few installments under the newcomer's belt now, we figured it's a good time to see how the venerable horror series stack up against each other in a head-to-head match.

When Saw debuted one week after the huge breakout success of The Grudge in 2004, not many expected it to become the enduring series that it did. The first film opened to $18.3 million (admirable for an under-the-radar R-rated horror) before finding legs at the box office that propelled it to $55.2 million domestically. Rarely does any horror movie triple its opening gross these days, especially when any "Halloween advantage" was lost three days after its release. The film banked $103 million worldwide against a $20 million combined budget.

Paranormal Activity, however, did one better. With a minuscule production cost, more than 99% of its $17 million combined budget was spent on marketing. The film opened in 12 theaters on September 25, 2009, generating nearly $78,000 over the weekend. Word of mouth spread like wildfire over the Internet, leading to a $532k second weekend gross from just 33 theaters. That jumped to $7.9 million from 160 venues the next week, and then $19.6 million from 760 theaters in its fourth weekend (its first as an officially "wide" release). Its fifth weekend of $21.1 million from 1,945 sites proved how much of a phenomenon the film was becoming. The final domestic gross reached $107.9 million, with global audiences paying $193.3 million to see the grassroots sensation.

Paranormal Activity didn't just out-gross Saw domestically and abroad, it was more than twice as profitable. Oh, and the sixth entry of Saw that year? It made $68.2 million ... worldwide.

Understandably, industry expectations were high for Saw II but it still managed to beat them with a $31.7 million opening (the fifth best in October history at the time) onward to $87 million domestically and $147.7 million worldwide. With a modest bump in the budget to $30 million, the sequel grossed 4.9x its negative costs.

The question surrounding Paranormal Activity 2 was a bit more skeptical in 2010. The first one reached heights that no Saw film ever had, and very few horror movies ever do, so it was reasonable to think that lightning wouldn't strike twice. But it did. The sequel opened to $40.7 million (topping the opening of every Saw movie in history) but ended up with less enthusiastic word of mouth than the first film as it banked $84.8 million domestically. The global take also dropped from the first film to $177.3 million, but with a total budget of $27 million it was still an unquestionable success. Not to mention more profitable than Saw II.

The third time was another charm for Lionsgate in 2006 when Saw III topped its predecessor's opening with $33.6 million. The domestic tally did drop slightly to $80.2 million, but the worldwide take increased to $164.9 million. The budget went north too, though, but that didn't stop the flick from turning another big profit (4.34x its $38 million budget).

Ditto for Paranormal Activity 3 - and then some. Not only did the series' opening weekend audience continue to grow, the three-quel bagged a huge $52.6 million debut to top 2011's Jackass 3-D as the best October opening in history. Long-term play-ability was virtually equal to the second film, but the total domestic gross reached $104 million (just $3.9 million less than the first) while the global take crossed the $200 million threshold. On a $32 million budget, the film made 6.28x its negative costs.

With all due respect to the achievements by Lionsgate and its Saw franchise, there's no real competition between it and Paramount's Paranormal Activity series when it comes to theatrical "hit" status. The fourth Saw film did relatively well but was the first to show severe signs of fatigue with a $63.3 million domestic gross, low enough to push the overall profit multiplier down to 3.77 (still very respectable). Having out-opened, out-grossed, and under-spent every single Saw installment though, Paranormal Activity sweeps this bout of Number Crunch.

That being said, the Saw series went on to add four more films (each one less profitable than the last, excluding the final film with its 3D-boosted revenue) to its resume with the concluding seventh film (Saw 3D) releasing in 2010. Its nature as gore-driven horror certainly gives it a more narrow audience than Paranormal Activity, and the rate at which the studio pumped out the films like clockwork is certainly the template that Paramount is now following itself. We've seen time and time again the effects of sequel fatigue, and Saw itself became a victim of it after peaking with the second and third films.

Will Paranormal Activity find the longevity to stick around for another three films after its fourth entry this year? If so, how long can Paramount keep audiences piling into theaters until they either get sick of the series and/or another horror franchise comes along with a different product?