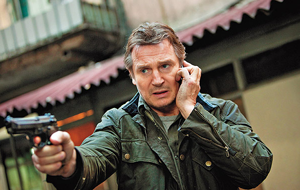 Liam Neeson is a busy man. He's starred in 16 movies over the last three years, or an average of more than 5 each year. All told, Neeson has approximately 50 films on his box office resume entering this week and up until 2012 he had never appeared in a live action franchise for more than a single film.

His first starring role in a major series, of course, was Star Wars Episode I: The Phantom Menace back in 1999, then moving on to headline Batman Begins as that film's lead villain. Excluding his very minor cameos in Attack of the Clones (voice-only) and voice contributions throughout The Chronicles of Narnia series, he had largely avoided reprising his past roles. That changed with Wrath of the Titans back in March and (spoiler alert) his cameo in The Dark Knight Rises.

Neeson is among the few actors to dabble in the big franchises while still commanding his own game outside of them, perhaps because he had such a great head start before ever appearing in one of said series. Starting Friday though, his streak of non-reprised leading man roles comes to an end with the release of Taken 2 - the sequel to the massive 2009 sleeper hit that effectively marked the beginning of the next/current chapter of his venerable career.

Since joining the Star Wars saga over thirteen years ago, Neeson's wide platform theatrical releases have enjoyed consistent success with only the occasional bump in the road. Though Phantom Menace remains the most profitable movie he's starred in during that time frame (making 6.24 times its combined budget), Taken was a worldwide blockbuster pulling in a then-shocking $224 million on a mere $67 million total budget.

Love Actually was even a hair more profitable thanks to its $246.9 million global tally (massive for a rom-com) against a $65 million budget.

On the heels of the 3D craze and a huge marketing campaign (featuring the star of Avatar, no less), 2010's Clash of the Titans then drew over $493 million - more than enough to recoup the $175 million negative costs.

Among his other recent successes are Wrath of the Titans (a domestic disappointment which was saved by its international gross), The Grey and Unknown. While none of the three broke out in the same vein as Taken or Clash of the Titans, they all cemented Neeson's newfound ability to draw a respectably-sized audience.

While ironic that Neeson's three most profitable films happen to be franchise movies now, there are still would-be blockbusters on the other end of the spectrum. Kingdom of Heaven, Battleship and The A-Team represent three recent financial flops he's had the misfortunate of being attached to. Although, perhaps surprisingly, none of those measure up to the financial disaster that was 2002's K-19: The Widowmaker - a film that banked on the stardom of Neeson and Harrison Ford, only to reach $65.7 million worldwide on a $130 million total budget.

But don't let those disappointments fool you: Neeson has continued to build a strong niche for himself that has turned him into a reliable box office draw during this era where an actor or actress alone is an increasingly smaller piece in the box office puzzle. Sure, the big names continue to draw their own established fans and can sometimes carve out a new niche - as proved thoroughly by Neeson's shift to action movies - but younger audiences today rely more on Twitter and Facebook buzz to know what they want to see in theaters.

It's hard to find flaws in the resume of a man who has worked with filmmakers ranging from Steven Spielberg to George Lucas, Martin Scorsese, Ridley Scott and Christopher Nolan. While those flaws may be there on occasion, again, one actor alone doesn't usually carry the success or failure of a movie on their shoulders. But with Taken, Neeson arguably *did* carry it thanks to the now-famous trailer and tagline.

That kind of lightning in a bottle is exceedingly difficult to capture more than once - especially in the same franchise - and while it remains to be seen what Taken 2 can accomplish in the long run, there's little doubt that Neeson's headlining act will again bring his fans back to theaters this weekend. And without his powerhouse presence in the first movie, the sequel and it's relatively high pedigree on the fall release calendar wouldn't even exist. Score one for the actors out there.

Discuss this week's edition of Number Crunch on our Forums.