close
Hollywood likes to break its own fourth wall -- how often have audiences gone along for the ride? 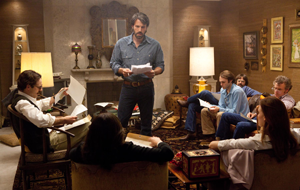 From Kevin Smith to Bucky Larson to an Oscar winner, Hollywood has spent a fair amount of time showcasing and/or poking fun at itself in movies throughout recent history. As the highly-buzzed-about Argo prepares to debut in theaters this weekend following huge early acclaim and positioning as a major Oscar contender, we're taking a look back at the wide release movies from the past decade that have broken Hollywood's fourth wall and turned their business into the art itself. We may even get a sense of what kind of mainstream success Argo can find based on this history.

Addressing the elephant in the room upfront seems best: 2011's Oscar-winner for Best Picture, The Artist, didn't turn into a huge mainstream hit. In fact, it had the second-lowest domestic box take ($44.7 million) of any Best Picture winner since 1987's The Last Emperor ($44 million) - the lowest being 2009's The Hurt Locker ($17 million). Adjusting for inflation, you'd have to go so far back into history to find another winner with lower ticket sales that accurate box office statistics aren't even available (pre-1978). Nevertheless, the film not only dominated the awards circuit last year but was also the most profitable "movie about movies" on our list. The valentine to the silent film era made $132.7 million worldwide against a modest $33 million total budget. Domestic audiences just weren't interested.

2011 held up another mirror to the film industry, though, with Martin Scorsese's adaptation of Hugo. Despite glowing critical reviews and its own fair share of Oscar success, the film didn't quite make its combined budget back at the worldwide box office. That said, the film did find a slightly larger mainstream crowd than the film it lost to for Best Picture. Hugo's $73.9 million domestic gross though was still low enough to prevent the international market from being able to make up for the loss as the film banked $180.9 million against a big $190 million budget. A rare financial miss these days for Mr. Scorsese, but he deserves a pass every now and then. With a stronger domestic market and more concentrated advertising, we might be singing a different tune about the film's earnings.

Having covered the opposite ends of the profitability spectrum with 2011 alone, the question is which one is in the minority? Unfortunately, the answer is The Artist. Dating back to 2000, only four films on our list of movies with significant plot elements pertaining to making movies were certifiably profitable during their theatrical runs. Those include 2011's Drive, 2001's America's Sweethearts and 2000's Scream 3. Films like The Aviator and Tropic Thunder also deserve credit here as they likely did profit in the long run, having made 1.47 and 1.28 times their budgets, respectively. More importantly, both were very well-received by audiences.

Outside of those, the remaining 12 films out of 20 in our topic flopped. Nay, bombed. The staggering statistic: all 12 of them failed to even make their budgets back. While Hugo is unfortunately among that group, it also stands as one of the few films to somewhat make up for it with awards circuit success and/or strong audience reception. Another film that barely missed the theatrical profitability mark was Jay and Silent Bob Strike Back.

The rest, however, simply can't find much redemption. From 2009's Nine and Funny People, and The Black Dahlia to Hollywoodland, each one of them grossed less than 75% of the money it took to make and market them. The worst offender, though, was 2011's Bucky Larson: Born to Be a Star. The comedy misfired to the point of grossing just $2.5 million domestically (and, by extension, worldwide) against a $25 million budget. In that one's case, we probably can't blame the inflated budget as we could with many other films on the list.

At first glance, this could paint a pessimistic picture for Argo. Movies about movies clearly do well far less often than they succeed (in terms of dollars), but the story revealed here is that the flicks winning over critics and/or boasting mainstream appeal through a star or widely appealing concept ultimately can become winners in some capacity. Where will Argo land on the spectrum? Although the film isn't expected to open quite as strongly as Ben Affleck's The Town did two years ago, the early screenings indicate it should play strongly throughout the fall and awards seasons. As another critical winner on Affleck's increasingly-impressive directing resume, Argo may be in it for the long box office haul.

Please note: unless otherwise stated, all budgets referred to include production and estimated costs for prints and advertising.

The theatrical trailer for Argo: