close
Because Crazy Needs Love, Too 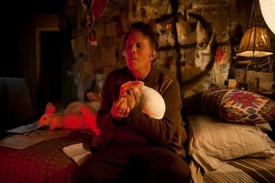 In one way or another, most of the demented killers in Seven Psychopaths slaughter for love. This got us thinking: the film's six psychopaths—yes, there's one less psychopath than advertised—might need some extra TLC so they'll cease their murderous ways, or at least have a special someone to share their mayhem with. Thus, we played movie yenta and conjured up some love matches for those six lonely psychopaths—and one for a seventh psychopath the movie failed to identify. Here are our picks for Christopher Walken, Woody Harrelson, Tom Waits, and company:

Psychohim: A serial killer running around the streets of Los Angeles offing (only) Italian mobsters, Billy's just another wannabe actor on his non-psycho days. He uses a Jack of Diamonds playing card as his serial killer signature, a smart branding move that makes him an instant celebrity killer in Hollywood.

Psychoher: A nurse by training, the outwardly sweet Annie spends her days reading romance novels and physically torturing an author she rescued from a car wreck—coincidentally, her favorite novelist—with various medical instruments. Taking a cue from Martha Stewart, Annie cultivates scrapbooking as a hobby, but her book is full of newspaper clippings of the infants and elderly who died mysteriously under her care.

Why they're a match made in psychoheaven: As he's fond of telling his screenwriting friend Marty (Colin Farrell), Billy really hates bitches. Sure, Annie has her difficult moments, but she mostly likes to keep her house in tip-top shape and make up Ned Flanders-esque profanity words. Plus, she's kind of a starfu... star-, er, lover, so Billy's burgeoning fame will provide an ego boost to both of them.

Psychohim: A petty criminal with a peyote habit, Hans is just trying to do right by his cancer-stricken wife when he dog-naps pooches from the park and returns them to their owners for the reward money. Underneath his graying pompadour and flowery ascots, though, he's the kind of calculating sadist capable of psychologically torturing the man who murdered his daughter for well over a decade until the latter man is forced to commit suicide to escape Hans' torments.

Psychoher: A physically stunted, 33-year-old Estonian prostitute who poses as a prepubescent orphan to escape police detection, Esther is an insane asylum escapee and a compulsive murderer. Her sick trick is attempting to seduce her adoptive fathers, getting rebuffed, and then killing them in revenge.

Why they're a match made in psychoheaven: Hans needs a daughter; Esther needs a father. 'Nuff said.

Psychohim: As a devoted pet owner, there is literally no one Charlie will not kill to get his beloved shih tzu Bonny back. So it's a good thing (for him) that he's already a pretty scary gangster, because he has the skills and experience to kill the many people standing in the way between him and Bonny.

Psychoher: A thrill-seeking millionnairess author who plays cat-and-mouse games with the police by writing about her murders in her "novels" (you know, one of those writers), Catherine kills her lovers (and flashes cops) just to see if she can get away with it. Oh, and because she has an ice pick lying around or something.

Why they're a match made in psychoheaven: Charlie's into the leggy, ice princess type, which Catherine certainly is. And rich bitch Catherine definitely looks like the type to carry a fluffy, white lap dog like Bonny in her Hermes purse at all times. It's not clear, though, whether their love—or they—would survive a heated argument over dog food brands.

Psychohim: A retired serial killer with a fondness for rabbits and ill-fitting suits, Zachariah is a creepy guy, but not a dangerous one. For decades, he's been nursing a broken heart ever since Maggie, his lover and and slaughtering partner, left him because he couldn't perform (the killings of random strangers) anymore.

Psychoher: A bunny-boiling, child-abducting, pregnancy-faking mess of a human being, Alex just wants some attention. Since she had her heyday before the advent of The Real Housewives franchise, where she would have fit right in with the other famewhores, this career gal decided to make herself an enemy of actual housewives by destroying Michael Douglas's domestic bliss.

Why they're a match made in psychoheaven: Co-dependency has a bad rap, but it works for some people, and it would definitely work for Zachariah and Alex. Plus, Alex could easily rid Zachariah of his bunny obsession—a souvenir from his doomed relationship with Maggie—and win over her man with a homemade dinner of rabbit stew.

Psychohim: A Vietnamese soldier fights bravely for his country and returns home to discover that his humble village, including his entire family, has been massacred by the American army. He vows to avenge the deaths of his wife and children by moving to the U.S., pretending to be a priest(?), sleeping with hookers(??), and assassinating the military brass responsible for the massacre.

Psychoher: One of Hollywood's biggest movie stars in the thirties and forties, Joan Crawford was also an exacting disciplinarian who reliably flew off the handle all the time, whether the trigger was the news of her failing career or the presence of a wire hanger in her daughter's closet. The actress wasn't a murderer by any means, but she did have a flair for creative sadism.

Why they're a match made in psychoheaven: Joan Crawford's tastes ran more toward fellow actors and powerful executives of multinational corporations, so it's not clear whether she'd give a poor refugee from a wartorn country a chance. That's too bad, though, since the two share a talent at strangling young women and need so desperately to play house.

Psychoher: A serial killer with just enough of a conscience to only kill other serial killers, Maggie revels in setting up elaborately brutal tableaus, like nailing the Zodiac's hands to his dining table with big, shiny knives before lighting him on fire. She appears to prefer murdering with a partner, but only if he's up to the task.

Psychohim: A San Francisco cop prone to violent vigilantism, Inspector Callahan does away with more bad guys during his two decades on the force than most serial killers could hope to in a lifetime. His signature weapon is a Magnum revolver, but he's not so set in his ways that he couldn't improvise with a rocket launcher or harpoon when necessary.

Psychoher: The shih tzu Bonny looks like an innocent bystander amid all the endless carnage in Seven Psychopaths, but that's just part of her long con. Her unblinking, unflinching face reveals the true emptiness of her heart.

Psychohim: A former boy's best friend made insane by rabies, Cujo is a vicious St. Bernard who racks up a body count of three before going after its unsuspecting owners.

Why they're a match made in psychoheaven: Bonny and Cujo seem like the type to go on a killing spree -- him attacking, her watching, the two robotically humping afterward -- until they're gunned down in a hail of bullets by Animal Control. There will be legends about this love story.