'Sinister': The Next Horror Breakout or Inevitably Overshadowed? 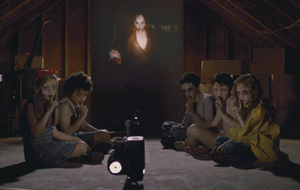 The buzz on Summit's Sinister has been slowly building steam over the past couple of weeks, and on the eve of its release this Friday it has some wondering if there's any hope of climbing out of the shadow of this month's Paranormal Activity 4. It also has us looking back at recent sleeper hits from the horror genre, a classification that Sinister could still end up falling under if mainstream audiences are hooked this weekend.

How is the R-rated Sinister stacking up against recent horror fare so far? Let's see:

This past January's The Devil Inside broke out to a huge $33.7 million opening before falling off the end of the earth as social media-driven word of mouth killed its momentum after opening day. Sure, it ended up hugely profitable but the end result wasn't the kind of feeling a studio wants to leave their audience with.

2011's Insidious, however, may be the better comparison for Sinister. Early buzz and mostly positive reviews on the movie are driving a stronger social media presence than it might otherwise have seen. That's similar to what happened with Insidious in the long run, which after a modest $13.3 million opening in April 2011 showed impressive legs on its way to a $54 million domestic haul and nearly $100 million worldwide.

If we draw a strict comparison to Insidious, the signs are excellent for Sinister: it leads the former in Facebook fans three days before release (119,322 vs. 5,521) and Twitter activity (23,288 vs. 1,755). Granted, Insidious was rated PG-13 and didn't face a sleeping giant one week later, which ultimately gave it an edge in selling tickets to teens.

While Sinister's signs are more mixed in comparison to The Devil Inside (which tallied close to 40,000 tweets three days before release and was also rated PG-13), its online activity on both Twitter and Facebook is still noteworthy. Moreover, the film has already generated more Flixster interest (96% of over 16,887 users "want to see" it as of Wednesday afternoon) than The Woman In Black had on the Thursday before its release (84% of 15,366 users). That's especially interesting because a high profile star like Daniel Radcliffe - popular among younger audiences - should technically give any film a big advantage when it comes to social media metrics. Another potentially fortuitous sign: Sinister currently leads this weekend's three other wide releases in Flixster interest, including Ben Affleck's already-acclaimed Argo.

Best case scenario: while there is no comparison with the release strategy of 2009's first Paranormal Activity, the timing stands out. The Ring, The Grudge, Saw and Paranormal Activity each became sleeper hits with their respective September/October releases, and the latter came after the peak of Saw's run. Can Sinister take advantage of similar franchise fatigue among audiences with Paranormal Activity 4 on its heels, or will it have to settle for a (still impressive) second-chair performance as did Saw against The Grudge in 2004?

The Boxoffice.com team has been remaining somewhat conservative on what Sinister can do in its opening weekend, although we're more confident now that it could exceed Insidious's $13-14 million range which would position it well if it can weather the Paranormal Activity 4 storm next week. With Halloween around the corner, the early buzz indicates this could play very well throughout the month.