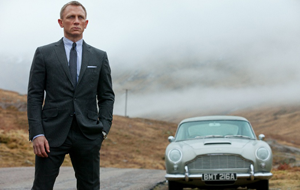 With less than nine days left before Skyfall makes its North American debut (or eight days for those catching it in IMAX on Thursday, November 8), the chatter on the latest and highly anticipated James Bond outing is reaching a fever pitch.

The buzz comes on the heels of Skyfall's outstanding $80.6 million overseas debut last weekend. A huge chunk of that came from the flick's United Kingdom home base where Skyfall tallied $32.5 million - the biggest UK opening of 2012 and the second best in history behind Harry Potter and the Deathly Hallows Part 2. 007 also topped that film for the UK's best Monday gross of all-time this week, and has just crossed $100 million internationally as of Wednesday.

Dating back to last Friday - two weeks out from release - Skyfall hit a massive 50,000 tweet mark in a single day. The momentum has carried ever since, having totaled 194,267 tweets between Friday, October 26 and Tuesday, October 30. Granted, the film's international debut is contributing to the high volume of discussion but its an impressive stat nonetheless. Perhaps an even better indicator of the strength of that buzz is the excellent 11.6 to 1 positive-to-negative ratio of the tweets.

How does that compare to other recent films?

Taken 2 tallied 10,410 tweets during the same five-day frame before its release in October. That sequel's pos-to-neg ratio, however, was on the opposite end of the spectrum at 4.6 to 1. It opened to $49.5 million.

The Bourne Legacy was even less impressive by comparison with its 7,112 tweets, although the 6.4 to 1 ratio was a bit stronger than Taken 2's.

Perhaps the best comparison is last year's holiday smash Mission: Impossible - Ghost Protocol. Although that film's week-early IMAX release changes the equation slightly, it tallied a modest 6,763 tweets during the same five-day frame. The positive-to-negative ratio during that time, however, was a fantastic 11.4 to 1 - just slightly behind where Skyfall stands right now. With strong word of mouth through the holidays, Ghost Protocol reached $209.4 million domestically.

Another 2011 blockbuster may also be an indicator of where 007 is headed at the domestic box office next weekend. Fast Five totaled 10,703 tweets during the comparable time and, interestingly, a low 4.4 to 1 ratio. We can mostly chalk that up to general skepticism of the franchise from online film circles - especially before the fantastic word of mouth of Fast Five reached domestic audiences. The film blew away the industry with its $86.2 million debut (onward to $209.8 million)

On top of the Twitter activity, Flixster also stacks up well with 98% of nearly 40,000 voters anticipating Skyfall as of nine days out from release. Taken 2 topped out at 30,637 on the day *before* release while Ghost Protocol capped with a near-identical 30,916 votes.

What does it all mean? No metric is ever an apples-to-apples comparison when it comes to social media, but the signs point to a huge opening for Skyfall. As of last Saturday, the Boxoffice.com team was predicting an $80 million North American debut for the 23rd Bond movie. That would already put it ahead of Quantum of Solace's $67.5 million debut back in 2008 for the biggest Bond opener, as well as The Bourne Ultimatum's $69.3 million opening (the record for the spy genre) back in 2007.

With snowballing buzz, highly penetrative and confident marketing (including the viral skit with Queen Elizabeth during the Summer Olympics), excellent reviews and overseas word of mouth, a hit radio single in Adele's theme song, and a domestic box office market that began to recover throughout most of October... well, we could potentially be looking at a blockbuster the likes of which the Bond franchise hasn't seen in a very long time - if ever.