The Filmography of Hope: Hollywood Takes on Barack Obama 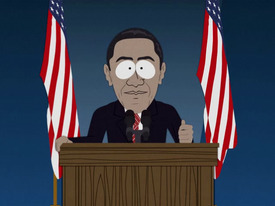 Last night, Joe Biden and Paul Ryan had their turn in the spotlight when they duked it out at the vice presidential debates. But let's face it: political events just aren't the same without Barack Obama's charismatic magnetism and what it is that brings people close enough to Mitt Romney to glimpse the outline of his Mormon underwear. Whatever you may think of the commander-in-chief's job performance, POTUS definitely has the makings of a star, from his supersonic ascent in the political world to his historic achievement as America's first black president to his incredibly photogenic family. In the last few years, Hollywood has been spinning its gears trying to explain and capitalize on Obama's star power. Here's what it has come up with so far:

The Obama Effect (2012) - Barack Obama was voted into office with the help of nearly all demographics in 2008, but the supporters who arguably benefitted most from his election psychologically were African Americans. The Obama Effect aims to capture many Black Americans' feeling of purpose and euphoria as the first serious African-American contender for the White House began to rise in the polls—but in the most awkward way possible. John Thomas (Charles Sutton, who also directed) is another middle-aged, corporate everyman until a near-fatal heart attack forces him to find a reason for living. John then becomes a die-hard Obama campaigner, a development that puts him in the uncomfortable position of asking his rich black Republican friends, like the cocaine- and orgy-loving Martin Luther Kennedy (Katt Williams), for donations. A ghostly vision of Obama serves as John's spirit guide, because I guess Barry had some free nights in his campaign schedule to enter a spectral dimension and thank slightly psychotic supporters in person.

"South Park" (1997-?) - Comedy Central's crass cartoon has devoted three episodes to Barack Obama and featured him in several more. The show's politics veer left or right on any given episode, depending on the target du jour, but its overall viewpoint amounts to that of a "South Park Republican," a center-right, libertarian stance co-creator Matt Stone sums up as, "I hate conservatives but I really f-----g hate liberals." That partisan ambiguity—and the show's fuzzy continuity—have created a Barack Obama that's less a coherent character than a generic figure of conspiracy and corruption, and just one among a cohort of public leaders secretly snookering the American people. In that vein, Stone and Trey Parker have made Obama an imposter-politician who's actually a Canadian actor, a world-class jewel thief (along with John McCain and Sarah Palin) staging an election to distract from a heist at the Smithsonian, and, in a truly ruthless character assassination, a fan of Tyler Perry movies.

2016: Obama's America (2012) - According to conservative commentator Dinesh D'Souza, the Mayans got it wrong when they declared 2012 to be the year the world ends. The real date of the apocalypse is, of course, 2016, when Obama will finish out a second term having made America a weak, poor, third-world nation like his father's homeland of Kenya. Why does the commander-in-chief want to destroy the US? Because unlike Luke Skywalker, Barack Obama doesn't have the Jedi Force to resist the pull of his father's Dark Side. But for all the lies on display in 2016—that Obama is compulsively living out the anti-imperialist ideals of his father, a man the future-POTUS met once when he was ten; that he's encouraging Muslim jihadists to attack America; that he's raising the national debt as reparations for colonialism—D'Souza paints a perversely flattering portrait of the 44th president, who can apparently destroy a 236-year-old nation all by his lonesome, Congress, UN and the Illuminati be damned.

Untitled Barack Obama Project (20??) - Commanders-in-chief have been surprisingly rare subjects of biopics, especially given their status as the most important men in the world. But a post-presidential film treatment of Obama seems all but inevitable, given the movie-readiness of his life story. (Compelling childhood? Check. Absent father? Check. Gorgeous wife and kids? Check. Shot the world's most wanted criminal in the eye? HELL YEAH.) When the movie gets rolling, Will Smith has a pretty good idea who should play the tall, athletic, natural charmer: himself, of course. Back in 2009, Smith said in interviews, "We [Obama and I] talked about [who would play the president] a few months ago. Again, it’s about the ears, that’s the thing. People see the ears, and Barack and I both have the ears, so I’m the most natural choice." Round out the cast with Gabrielle Union as Michelle, Stephen Root as Joe Biden, and Ben Stiller as Rahm Emauel, and it's a done deal. Let's hope that movie doesn't end with extraterrestrial aliens blowing up the White House.