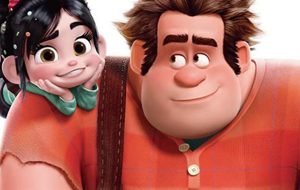 Though not due to release for another two weeks, Disney has been ramping up the promotion for Wreck-It Ralph over the last few days and it seems to be paying off in a big way. As of last Thursday, October 11, Ralph boasted 602,185 Facebook fans (up less than 1,400 from the previous day). Within 24 hours, that figure shot up to 673,257 and continued to gain more than 100,000 fans per day over the course of the weekend.

Through Monday, October 15, the fan total was a huge 971,146 with 18 days before release. What's behind the sudden jump?

Currently making the rounds across the web are promos for the flick's faux racing game "Sugar Rush", the war game knock-off "Hero's Duty", and the most recent clip featuring an extended look at the Bad-Anon meeting of villains (all of which you can see below this post). While the viral clips are no doubt a factor behind the sudden increase in activity, its impressive nonetheless.

By comparison, the Facebook fan total for Wreck-It Ralph is one of the largest of any recent animated hits. At 18 days out from their respective releases, Ralph leads The Lorax (544,124 fans), Puss In Boots (799,185), Megamind (34,355) and Despicable Me (99,956). With the exception of The Lorax, Ralph's Twitter activity is also ahead of each of those films during the same time frame.

Will the demand translate overseas? That remains to be seen. 3D will certainly give the film a small advantage, but only Puss In Boots and Despicable Me crossed $500 million worldwide - the latter including a huge $251.5 million domestic haul. With no preexisting fan base that comes with a movie like Puss In Boots, the staggered international release strategy indicates that the studio is hoping online word of mouth will carry the film long past November. For example, the United Kingdom won't even get to see Ralph until February 15, 2013.

Nevertheless, the domestic potential looks great and may be able to widen its appeal over Disney's 2010 retro holiday offering, Tron: Legacy. Despite relatively decent word of mouth, the lack of female interest in that film held it back from a more impressive box office status. By contrast, Disney's showcasing of Wreck-It Ralph's "leading lady" (Sarah Silverman-voiced Vanellope von Schweetz) may help to enhance its "cuteness" factor - something that worked wonders for the aforementioned Despicable Me two summers ago.

Where the buzz goes from here remains to be seen, but combined with the positive word about the film out of this year's CinemaCon back in April, the signs are definitely pointing in the right direction for Disney's video game homage.

Discuss Wreck-It Ralph on our Forums