close
Nobody does box office better. 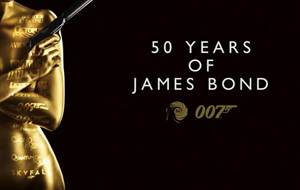 If you've been following the entertainment business this year, you've probably noticed the hype surrounding not just Daniel Craig's anticipated third outing in Skyfall, but the 50th anniversary of the James Bond film franchise marked by the year 2012.

As such, the Internet has become replete with retrospectives on the series and while most are certainly fascinating reads, most of us are now well aware that the Bond series is 50 years old, has seen 6 actors take on the character, and boasts 23 movies (pre-Skyfall) on its resumé - including Sean Connery's unofficial 1983 entry, Never Say Never Again. Et cetera, et cetera...

With that said, here are some 007 numbers that box office enthusiasts might be particularly interested in. And yes, we're including Never Say Never Again in our calculations. It may be unofficial, but it just doesn't seem right to exclude a Connery-portrayed Bond.

Average Opening Weekend: $23.6 million (includes only the 13 most recent films)

Longest Streak of Declining Domestic Grosses: 3 (3 times)
Thunderball > You Only Live Twice > On Her Majesty's Secret Service
Diamonds Are Forever > Live and Let Die > The Man with the Golden Gun
Octopussy > Never Say Never Again > A View to a Kill

Unless otherwise noted, all figures represent domestic data only.