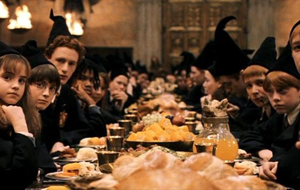 Just as millions of Americans prepare to gobble up turkey and stuffing this weekend, they'll no doubt be heading to their local cinemas to catch the latest and greatest cinematic side dishes offered up for the holiday season. What have audiences developed the most taste for over the years? Let's count 'em down:

With its $73.5 million five-day gross, this modern family mainstay starring Jim Carrey claims the fifth-best Thanksgiving weekend performance of all-time. That includes $52.1 million during its second weekend. In fact, for a non-opener, it was the best at the time of its release. Adjusted for inflation, that year 2000 gross would equal nearly $110 million today. The long-awaited live action adaptation was such a hit, it won its box office year with $260 million - a rarity for a holiday-themed movie (and the only one to do so since 1990's Home Alone).

The penultimate film of the Potter franchise marked a return to the November release dates. After taking a break for five years following Goblet of Fire's November debut, the first half of Deathly Hallows chimed in with $75 million (including $49.1 million during its sophomore weekend).

This highly anticipated sequel, the young Pixar studio's third film, lived up to audience and critic expectations and rode the wave of buzz from its limited release debut in 1 theater before opening wide on the day before Thanksgiving. The film still holds the title for the best 5-day Thanksgiving weekend gross by an animated movie (followed by 2010's Tangled with $68.7 million, including its opening weekend).

With his second entry on the countdown, Harry owns the runner-up spot with Goblet of Fire's $81.3 million 5-day take. This also includes its second frame, and the film still stands as one of the more impressive performers in the franchise. Prior to Goblet, the second and third films had declined in overall domestic gross. Strong word of mouth for Goblet, however, helped drive it to become the series' second-highest earner at the time (and it still remains one of the best in ticket sales).

Surprised? You shouldn't be. Potter simply dominated the November box office market over the past decade, evidenced by its claim over three of the best Thanksgiving weekend performances ... including, of course, the best with the first film. Goblet of Fire just barely missed overtaking this one, but Sorcerer's Stone's $82.4 million 5-day haul still stands as the best Thanksgiving feast that Hollywood has ever enjoyed. That would be the equivalent of nearly $117 million with today's ticket prices. And like two other films on this list, Sorcerer's Stone went on to win its box office year with $317.6 million.

With The Twilight Saga: Breaking Dawn - Part 2 currently in release, it looks poised to take over one of the those top 10 spots. The question is: can the finale top New Moon's holiday performance?

Either way, with the domination of family films among the top five Thanksgiving performers, maybe there is some accounting for taste.